Top Plays of the Alabama Football 2012 National Championship Season: "The Battle of the Freshmen"

Players report for camp the first weekish of August.

Share All sharing options for: Top Plays of the Alabama Football 2012 National Championship Season: "The Battle of the Freshmen"

"The Battle of the Freshmen"

On a wet day in Columbia, MO, the the Mizzou Tigers got their first glimpse of Alabama football- to the tune of a 42-10 drumming. This particular play came mid way through the 2nd quarter when Alabama was already leading 21-0. 2nd and 11, from the 15 yard line, freshman TJ Yeldon takes the handoff, follows his pulling blockers to the right side, weaves his way around some defenders and right about the 9 yard line he does this...

This play wasn't a touchdown and in fact I believe this drive ended on a turnover in the redzone. Doesn't matter. This was a spectacular play, by yep, another freshman. Oh and BTW, this came against one of the top SENIOR defenders in the SEC...

Actually, Rambo makes more than one appearance in this contest.. 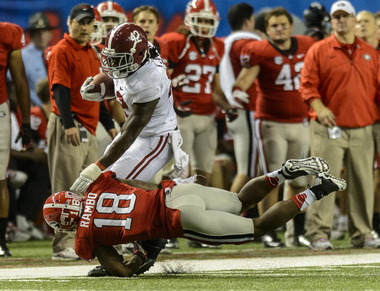