Alabama's Running Game: The Outside Zone

Alabama's running game revolves around zone blocking, which they do extremely well. In this post we'll take a look at one of the two zone plays, the Outside Zone.

Share All sharing options for: Alabama's Running Game: The Outside Zone

Within a Pro-Style Offense, every running play typically fits into one of five categories: Outside Zone, Inside Zone, Power-O, Counter, and Draw. There will always be wrinkles, of course, but the vast majority of plays will be one of those five. It will seem like far more … in fact, if Alabama were to run the ball thirty times against Virginia Tech on August 31, you may very well think they ran thirty different running plays. But those differences are cosmetic, and when you break the play down to its core it’s almost always going to be one of the five.

Alabama’s bread and butter, the heart of their offense, is zone blocking. If you’re an NFL fan and you hear zone blocking you’re likely to think of the Denver Broncos of the late 1990s and early 2000s, who used this style of blocking almost exclusively, to the tune of an annual 1,000 yard rusher and two Super Bowl victories. At the college level, Alabama has duplicated this success. In this post I’ll talk about Alabama’s usage of the Outside Zone.

Zone plays are rather simple from a conceptual standpoint, but their successes on the field are the product of absolute commitment and rigorous attention to detail on the part of both the offensive line and the running back.

When running the Outside Zone, rather than engage a defender at the snap, offensive linemen are taught to take a step to the play-side. This allows them to achieve proper leverage, and, if possible, puts them in position to drive the defender back to the inside. If this proves impossible, the linemen (or tight end) should push their defender toward the sideline. The responsibilities of each individual lineman depend largely on whether or not they’re covered (a defensive linemen directly across from them, or close to it) at the snap of the ball. If they are covered, the offensive lineman’s job is straightforward – achieve proper leverage and block that defender. If they are not covered, the offensive lineman’s job is less straightforward – they must either help double team one of the defenders before disengaging and getting up to the second level of the defense, or they must go to the second level immediately.

The running backs job is to be patient initially, and then decisive when the opportunity presents itself. Specifically, the running back must wait for a crease to open, and then run directly into that crease, straight up-field and toward the end zone. Where that crease will open up is tough to say, on any one play. If the offensive linemen all succeed in driving the defenders back to the inside, the running back will be able to reach the edge and turn the corner. But this is often not the case, and the running back must be ready to turn up-field before getting to the edge. Many running backs simply aren’t cut out for this. Either they’re not patient enough and want to get up-field immediately, or they aren’t decisive enough when the first crease opens up, likely because they’re trying to do too much. Fortunately for Alabama, TJ Yeldon is both patient and decisive, and absolutely cut out for this type of play.

Lets go to last year’s SEC Championship Game for an example of the Outside Zone. This is one of my favorite plays of the whole season, mainly because of the near-perfect execution that follows. I also chose this play because, on replay, CBS shows us the All-22 footage, so we can really see how the play develops. The play occurs at the 4:25 mark of the 3rd Quarter, and begins at 1:28:30 of the video … although I recommend everyone pay more attention to the replay, which begins at 1:30:00 (VIDEO) This is my sketch of the play: 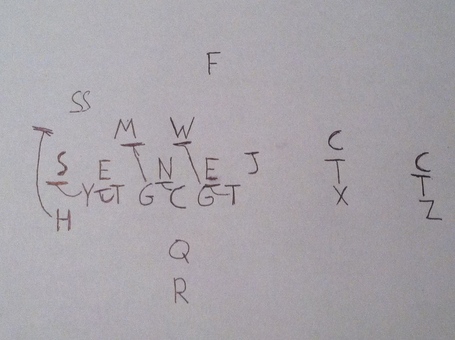 Alabama is in the one back pistol formation. They’re overloaded to the left, with both a Y-Back and H-Back to that side, and both WRs are to the right of the formation. Georgia is in a standard 3-4 defense, with the strong safety creeping down to the strong side of the formation, and both the MIKE and WILL shifted in that direction as well. The play is an outside zone to the left. 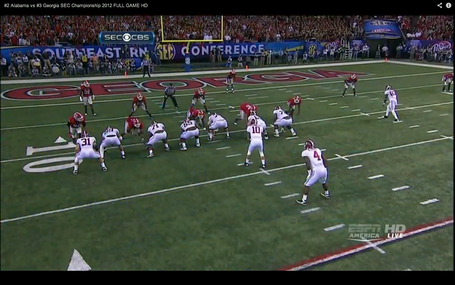 This essentially boils down to getting a hat on a hat, as Alabama decides not to double-team any one defender. Here is how each assignment breaks down.

The Y (Michael Williams) takes a step to his left and then engages the SAM.

The LT (Cyrus Kouandjio) takes a step to his left and then engages the play-side DE.

The C (Barrett Jones) takes a step to his left and then engages the NT.

The RT (DJ Fluker) takes a step to his left and then engages the back-side DE.

The LG (Chance Warmack) moves up to the second level and engages the MIKE.

The RG (Anthony Steen) moves up to the second level and engages the WILL.

The H (Kelly Johnson) moves up to the second level and engages the SS.

By design they leave the JACK unblocked, knowing that he’ll have to hold his ground to maintain his run fill and avoid opening up a cutback lane. 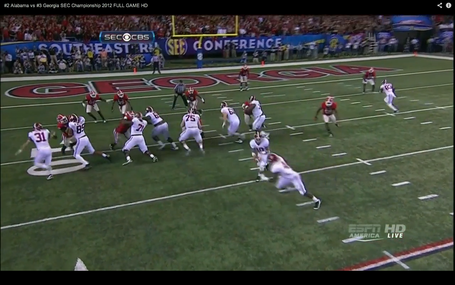 Almost immediately Yeldon realizes he won’t be able to reach the edge. Because Georgia is overloaded to the strong-side of the formation, Alabama is unable to achieve proper leverage and drive them back to the inside, so instead they improvise. Besides Barrett Jones (who put his man on the ground) and DJ Fluker (who does seal off his man to the inside), every other Alabama blocker drives their man toward the sideline. From here it’s easy to see where the crease is going to appear … between Fluker and the rest of the Alabama blockers. Yeldon sees the crease, runs to it, and scores a huge touchdown for the Tide. 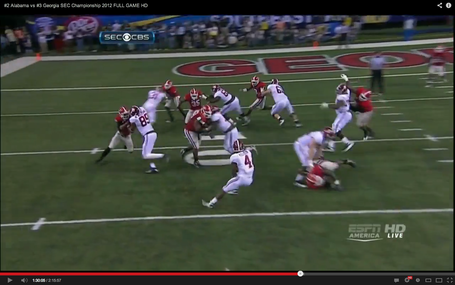 Within the Bill Belichick coaching tree the credo is "Do Your Job", and Nick Saban preaches this at every opportunity. This play is a perfect example of what happens when everybody does their job just right, from each blocker to the running back.

Later on I'll discuss the Inside Zone, probably the most common of Alabama's run plays.