Is this the year Bully and Mullen finally take the next step and climb into the middle of the SEC West?

We've already predicted the season's wins and losses for each SEC school, including Mississippi State's, now we'll work backwards through the 2013 Alabama schedule and preview each SEC game, ending with Va Tech.

Well, for starters 38-7 is what happened. I actually attended this game with fellow RBR'er James Tew and before we could even get excited about a good ole SEC West show down, the score was 21-0. The Bulldogs came in about as confident as we've seen in some time. Cowbells were CLANGING and their fan base was all #8-0 #WeBelieve CLANGA CLANGA. 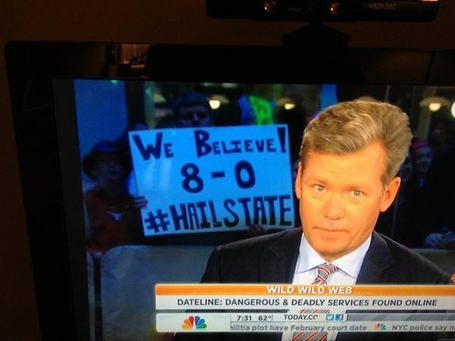 Not exactly something to believe in, amiright?

How Does Mississippi State Look In 2013?

MSU lost its top two corners to the draft and even their own fan base isn't all that high on the defensive backs in 2013, ranking the unit 10th in the SEC.

10. Mississippi State -- This is actually a quite ambitious ranking for a unit that lost both of its starting corners to the NFL Draft and a starting safety as well. However, State does return Nickoe Whitley, who will be looked to as a leader for this unit. The Bulldogs also bring in Justin Cox, who should/could be an immediate impact guy. Jamerson Love I think will be better than expected, but in reality both starting corner spots are a wide open race, seemingly. This could go up or go way down, and we should/could find out in week one with a match-up against pass-happy Oklahoma State.

If the Bulldogs have any hope of pulling the upset they must be able to slow down Alabama's passing game. If they allow McCarron to pick apart their young secondary they may as well forfeit and save themselves the beating.

This essentially would mean their defensive line and linebackers must have a solid outing, no? Well, the good news is that those two units should be much improved from 2012 where the MSU front seven averaged 165 yards allowed per game on the ground and only supplied 1.38 sacks per game.

LB's- Losing Cam Lawrence is going to sting a little bit but having 4 of the top 5 guys back including Freshman All-American Benardrick McKinney will help out a lot. Deontae Skinner also returns and look for Matthew Wells to take over for Cam. Chris Hughes was dismissed from the team so look for 4-star redshirt freshmen Richie Brown and Beniquez Brown to step in as backups. Plenty of talent and experience in this group.

DL- Denico Autry is poised for a big year at DE. Kaleb Eulls moved back over to tackle where he will be pushed by the young talent of Quay Evans and Nick James. DE Preston Smith could be a breakout star with young pup Chris Jones behind him. This is the most talented line MSU has had in a while...but like OM they are young.

On offense Bully fairs far better. Senior running back LaDarius Perkins returns after a solid junior campaign and Josh Robinson, Nick Griffin, and Derrick Milton all return to supply quality depth. One advantage that could swing in MSU's favor is the four returning starters on the offensive line. Add senior QB Tyler Russell to the mix and the MSU offense (at least their running game) should be one of the best in the league.

Though the offensive line and running backs should be above average, the wide outs provide more question marks than answers. Bulldog fans are expecting big things from incoming true freshman Fred Ross but veterans Jameon Lewis, Joe Morrow, and Robert Johnson haven't quite lived up to their potential.

They must be able hold Alabama to sub 21 points (and not just in the first quarter). Alabama will likely want to start fast and jump on MSU early and a couple first quarter scores for 'Bama would spell disaster for a possible MSU upset. The front seven will have to find a way to stop the Alabama running game without bringing a Safety up in run support and their DB's will have to hold on for dear life. If they can stop the run and get some pressure on AJ, keeping the game close may be possible.

They must take advantage of the LSU game. Think 2012 Texas A&M (actually don't, too painful). LSU is always one of ‘Bama's most physical games of the year and if Alabama comes in beaten and bruised, MSU may be able take advantage.

Their running game must be effective. The blue print on how to beat ‘Bama is there - run the ball well on 1st and 2nd down and give yourself a manageable 3rd down. (Oh yeah, you need an otherwordly QB as well. Tyler Russell is that good, right?)

What I Think Will Happen:

I don't want to completely dismiss Mississippi St because they have been a thorn in our side for some time now but ask yourself this question— has MSU improved enough this off-season to seriously compete with the likes of Alabama? The game should be closer but I feel comfortable enough picking Alabama for the win.

MSU does return a solid offense but the defense, especially the defensive backs, won't be able to hold up to the Alabama passing game. Eventually the front seven is worn down and the 'Bama 2nd stringers see the field by the end of the 3rd quarter.

I expect Amari Cooper and AJ McCarron to have big days . I'll wager a bet that T.J.Yeldon goes for a buck fifty, Amari has 100 yards receiving to go along with a couple TD's and Derrick Henry adds another 100 yards on the ground.

What are your thoughts?