June and July may be baseball season in most places, but in Tuscaloosa it's getting-ready-for-football season. And August? Forget about it.

It's still the off-season, which means that all we info-craving nerds can do is parse the brief viewing sessions at the beginnings of practices and micro-analyze every syllable that proceeds from the mouth of Nick Saban during his occasional pressers. 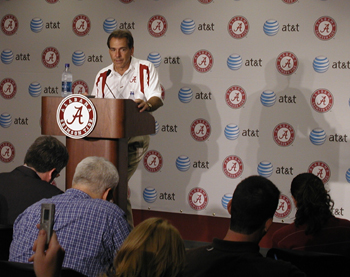 Just remember that lineups for brief media sessions can easily be designed to fool upcoming opponents, especially during the pre-season when nobody has seen what we really do in games yet.  And if you believe Saban thinks of press conferences as an opportunity to unload the truth, the whole truth, and nothing but the truth on a waiting world, well my friend, your gullibility is charming but may negatively impact your bank balance one fine day.

Consider putting a bit of  "reverse english" on Saban's pronouncements to the press.  Coach uses the media tool to flatten peaks and raise valleys.  If he gushes about a particular unit in the evening presser, that probably means he has been ravaging, savaging and rampaging those asses during the daylight hours, and the poor guys need an ego boost.

Although you won't hear him reaming out his star players to the press--he'll flatten those emotional peaks behind closed doors.  Saban understands well the many PR advantages the team reaps from having visible stars.

What do you make of Brandon Greene to tight end?  There are certainly a couple of ways to read it--one is that Greene is looking so good that Saban wants to get him on the field right away, and is still planning on starting him at left tackle next year, but you could also see the move as an enthusiastic endorsement of the abilities 320-pound true freshman Grant Hill's, who has slid into the backup LT spot, at least for the nonce.

Either way, the early word on Greene is good: the big fella actually has decent hands.  Look for him to at least play the role Jesse Williams filled in goal-line sets in 2012, and perhaps get a little more PT than that.

Trey Depriest might be one of the ten best middle linebackers in the country, but Alabama is so damn loaded at that position that-at least assuming that everybody stays healthy-his temporary suspension isn't that big a deal.  In fact, it really wouldn't be all that big a deal even if it weren't temporary.  (I'm not saying there's any reason to think it won't be).

In fact, it's hard not to get a little excited about the opportunity that is being afforded to Reggie Ragland and Reuben Foster.  Who will step up?  We don't expect Depriest to get Pipp'd, but it wouldn't be the world's biggest shocker.  Outrageous talent is on hand. 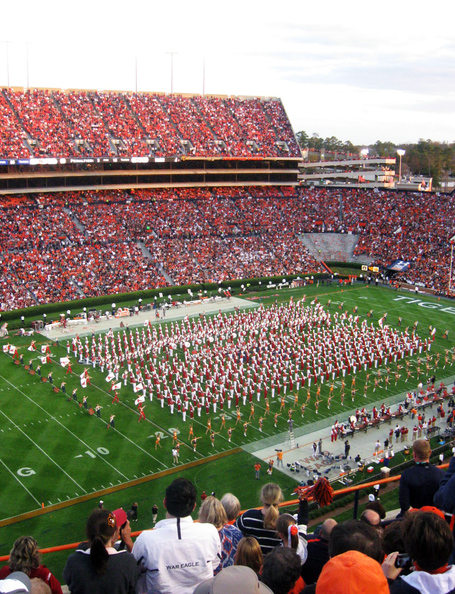 College football is changing, and the only question is how much.  Conferences have all the stability of half-melted butter, a still undefined playoff system is right around the corner, the end of amateurism as we know it in college sports may be in sight, and some are even theorizing about turning the NCAA into an NFL minor league.

Yet--at least for right now--the game is still defined by, and to some extent ruled by, its traditions.  Most of the big programs remain in their traditional conferences, teams still define seasonal success by how they do against their long-time rivals, fans still gather at traditional spots around the campus to warm up for games, cheerleaders still cheerlead, marching bands still blare out fight songs, and little boys still pretend to be the QB at Local U.

These are the good old days.  College football has never been more popular than it is right now, and our own team, despite all its past greatness, may be in the best spot it has ever been in; really, maybe it's the best spot any team has ever been in.  So please, do me a favor and enjoy traditional college football while you can.  It may never be this good again, and it may not be this way  for long.

At least if old-time college football is on its way out, it looks like it will exit with Alabama on top of the heap. 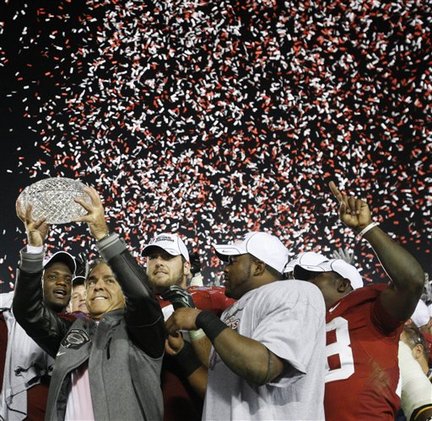