In 2012 the vertical element within Alabama's passing offense grew, and I expect that trend to continue in 2013.

I know I said at the end of my previous post that we would next be discussing the Inside Zone play, but for the sake of variety, lets first talk a little about the Alabama pass offense.

When Jim McElwain left Alabama for Colorado State after the 2011 season I was hoping Brent Pease was going to be the next Offensive Coordinator, and I’m sure many of you were too. I know Nick Saban was, so much so that he interviewed him the day after the 2012 BCSNCG. But Pease chose Florida, and Alabama ended up with Doug Nussmeier, who most recently was the Offensive Coordinator for the University of Washington. Fortunately this has worked out quite well for Alabama. Nussmeier, while keeping the core concepts of the Alabama offense intact, managed to add more of a vertical element, which has proven to be invaluable. That’s not to say Alabama never stretched the field under McElwain, but in 2012 they did so more frequently and more effectively, and this is something we can look forward to continuing in 2013.

Under Nick Saban, Alabama has always been a team that, when they throw the ball deep, typically did so by first establishing the run, thereby drawing an extra defender in the box, which in turned opened up the deep part of the field. Then they would line up in a formation that suggested they were likely to run the ball, only to use play action to fool the defense. There’s no better example of this than Amari Cooper’s game winning touchdown against Georgia in the SECCG. But what has increased under Nussmeier is the amount of vertical passing concepts used, both with and without play action. With the most talented set of skill players this school has probably ever seen, we should only expect this is to continue (and likely increase even more).

The specific play Alabama likes to run is Three Verticals, typically with all three WRs lined up to the same side. Inherently, Three Verticals (or Four Verticals) contain option routes, where each WR is taught to adjust their route based on how they read the coverage. But when Alabama runs it, for the most part, it’ll look pretty similar to what you'll see below.

Lets go to last year’s Iron Bowl for the first example. The play occurs at the 12:46 mark of the 2nd Quarter, and begins at 0:47:35 of the video … although once again I recommend paying more attention to the replay, which begins at the 0:48:04 mark of the VIDEO. This is my sketch of the play: 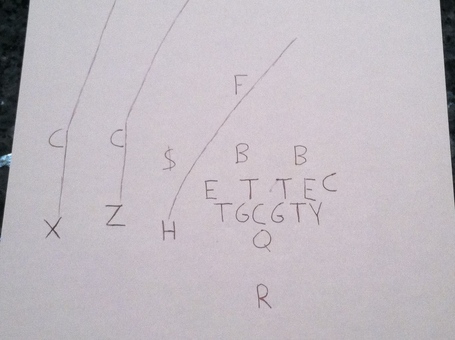 Alabama is in a one back formation, with the QB under center. The Y-Back is tight to the line on the right side of the formation. Both the X and Z WRs are lined up to the left of the formation. The H WR is initially lined up to the right, but is motioned over to the left of the formation. Auburn is playing their base nickel defense (4-2-5). Both linebackers are shifted over to the strong side of the formation. The boundary corner, originally lined up across from the H, does not follow the H across the formation. This typically indicates either zone coverage or a corner blitz, and when the strong safety moves down to line up across from the H, it begins to look like man coverage coupled with a corner blitz. That’s exactly what Auburn does … they’re playing man coverage across the board, with the strong side backer on the Y-Back and the weak side backer on the RB. The free safety is playing centerfield and the boundary corner is blitzing. For Alabama this is a play action, three verticals. 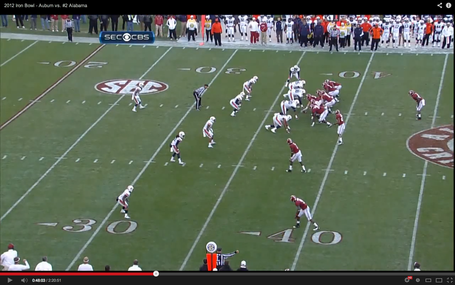 Either AJ McCarron or the Alabama sideline probably anticipated the blitz, because they’re in max protect, with both the Y and the RB staying in to block. Therefore it’s only a three man route. Essentially all the WRs are running verticals.

The X (Amari Cooper #9) runs a go route with a slight bend to the inside (skinny post).

The Z (Kenny Bell #7) runs a go route with a slight bend to the inside (skinny post).

The H (Christion Jones #22) angles across the field and toward the end zone. 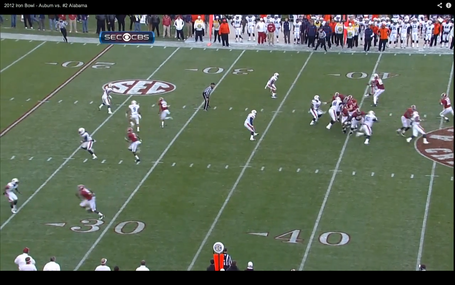 Because there are three deep routes and only one deep safety, that safety is caught in a bind immediately. If he sticks to the middle of the field he can help on Amari Cooper and Kenny Bell, but that leaves the strong safety with no help. If he helps out on Christion Jones then the two corners matched up with Cooper and Bell are left with no help. Jones beats his man quickly so the safety has no choice but to help. The two other corners also get beat, especially the one covering Cooper who simply doesn’t turn his hips fast enough … Nick Saban would show this play as a prime example as to why corners should not backpedal. From there it’s just pitch and catch. McCarron makes a perfect throw and Cooper catches it in stride for the touchdown. 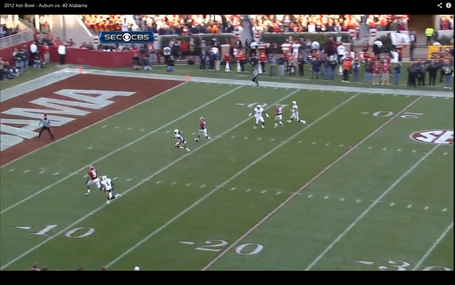 It’s important to realize how different routes compliment each other. It was Jones who took the deep safety out of the middle of the field, freeing it up for Cooper and Bell.

This, by the way, is a play they run frequently, only with slight formation variations.

They run it against Texas A&M at the 4:27 mark of the 4th Quarter and it begins at the 2:02:07 mark of the VIDEO. Remember to click out of the video immediately after the play, because things get painful quickly. Once again Christion Jones clears out the middle of the field and Kenny Bell is the one who beats his man and gets the football. 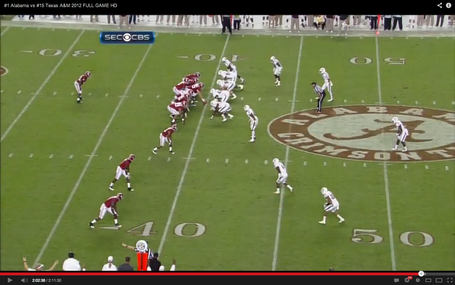 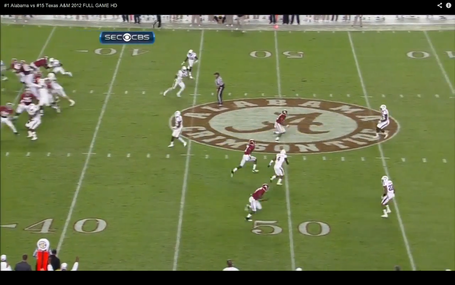 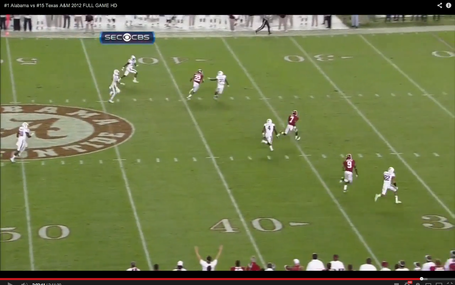 The also run it against Tennessee at the 8:27 mark of the 1st Quarter and it begins at the 0:17:02 mark of the VIDEO. Tennessee is playing a deep cover two zone, and as is often the case with multiple vertical routes, the zone defenders confuse their keys and leave someone open. In this case Amari Cooper is wide open in the end zone, so much so that he simply turns around and waits for the football. 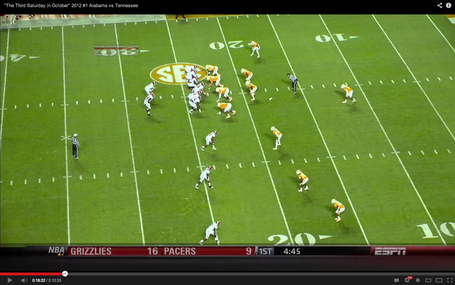 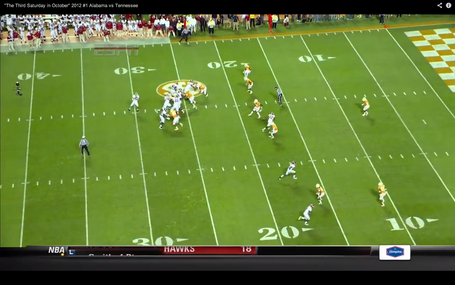 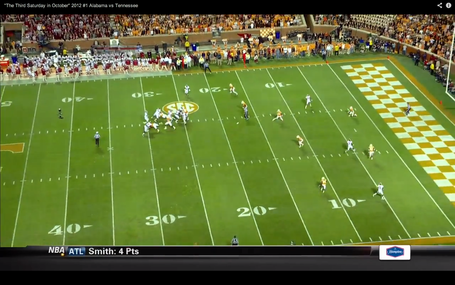 They also run it against Western Kentucky at the 6:04 mark of the 1st quarter and it begins at the 0:09 mark of the VIDEO. For this one you’ll notice that the personnel are different than the other three examples. This was prior to DeAndrew White’s injury and Cooper’s subsequent emergence, so White is the X. Additionally, Kevin Norwood is in for Bell at the Z, and that’s who ends up on the receiving end of this touchdown. 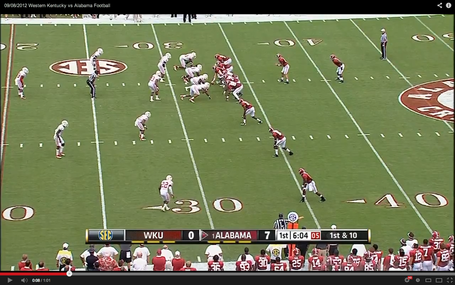 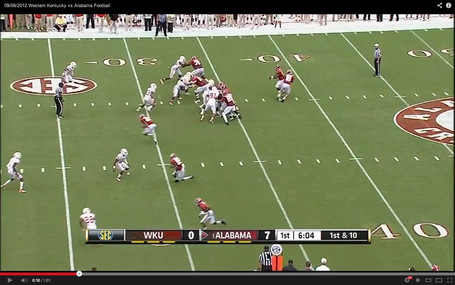 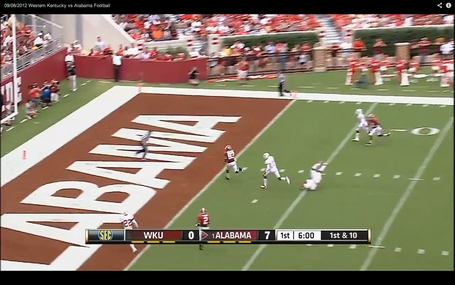 I’m sure there are plenty more examples, but these are the few I can recall off the top of my head. So next time you see this formation, especially if Alabama is in plus territory, there’s at least a decent chance that the play is Three Verticals. Typically you’ll see Cooper at the X (or White), Bell or Norwood at the Z, and Chris Black or Jones at the H.

With an even better stock of WRs this year, expect Alabama to start incorporating some Four Verticals plays into their arsenal, where they keep three to one side and use another WR out wide on the opposite side. They can also go with two on each side. When you have this much talent there are lots of possibilities, and I’m confident the Alabama offensive staff will take full advantage.