Okay, let's get this out of the way: Sophomore cornerback Geno Smith was arrested for DUI. He will be suspended for the Virgina Tech game.

Trey DePriest returned from his one week suspension for a violation of team rules.

Move along. Nothing to see here.

Classes started this past week and as is the tradition, the Freshmen were learning the Alabama Fight Song. 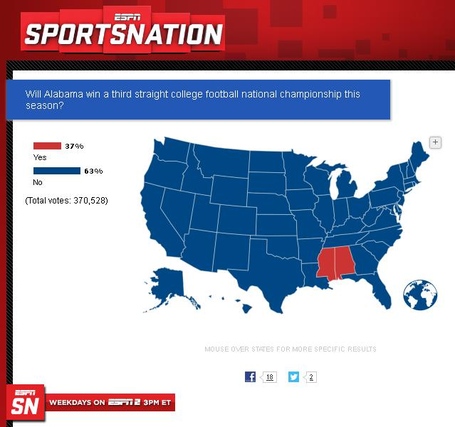 How did you vote in the ESPN poll that asked "Will Alabama win a third straight college football national championship this season?" The fine citizens of Alabama and Mississippi seem to think the Tide will indeed three-peat. The rest of the country are in denial.

Virginia Tech will be down yet another man as defensive lineman Corey Marshall has left the team for "personal matters". The Hokies have already reported that starting linebacker Ronny Vandyke and running back Tony Gregory are out with season-ending injuries. Also hurting are offensive lineman Mark Shuman (expected to miss four-to-six weeks with a knee injury), running back JC Coleman (sprained both ankles), and All-ACC cornerback Antone Exum (offseason knee surgery).

On Saturday, 4-star WR Cameron Sims (6-3/199) gave his verbal commitment to sign with the Crimson Tide in 2014. He is the 19th commitment and second wide receiver of this class (Derek Kief).

Basketball coach Anthony Grant is getting a jump on 2015 recruiting garnering a commitment from 3-star forward Brandon Austin (6-5/180) of Montgomery's Carver HS. He is the first commitment to the 2015 class.

Random Thought From Around the Nation

After some boisterous public outcry, the NCAA has shocked us all by doing the right thing! Earlier, the NCAA declared that Middle Tennessee State walk-on football player and former Marine Steven Rhodes had to forfeit two years of eligibility and take a mandatory redshirt year this season because he participated in a military-only recreational football league at a Marine base in 2012! Are you kidding me? They also hinted that it would take several weeks to sort it all out. However, after several days of relentless criticism for their ruling, the NCAA reversed their decision and have allowed Rhodes to play right away and still have four years of eligibility. NCAA, your time in college football is coming to an end.

The SEC released the 2014 Football conference schedule and the Florida Gators will be coming to Tuscaloosa on September 20, 2014. Alabama will need to schedule one more non-conference opponent.