Alabama's Running Game: The Inside Zone

Alabama's bread and butter is the Inside Zone. Lets take a look at what makes it so effective.

Share All sharing options for: Alabama's Running Game: The Inside Zone

In a previous post we discussed Alabama’s usage of the Outside Zone, one of the two types of zone runs. Now we’ll discuss the other type of zone run, the Inside Zone.

Alabama uses the Inside Zone more than any other running play, and they do so with great effectiveness. This is true for a variety of different reasons, one of them being the types of backs that come through Alabama. Under Nick Saban Alabama has used larger, more physical backs (Glen Coffee, Mark Ingram, Trent Richardson, and Eddie Lacy all fit into this category). These types of backs, traditionally, are more effective running between the tackles than they are at running outside the tackles, and for a single back team (which Alabama is) the most common between the tackles run is the Inside Zone.

The two main differences between the Outside and Inside Zones are the steps that the offensive linemen take and the aiming point for the running back. Conceptually both plays are the same, in that they are both predicated on zone blocking schemes.

As is the case with all zone blocking plays, the first question each offensive lineman (and tight end) must ask himself is ‘am I covered’ … i.e. is there a defensive player on the line of scrimmage, directly across from me. If the answer is yes, the lineman’s blocking responsibility is pretty simple – block the guy covering me. If the answer is no, things become a bit more complicated. That lineman must either help double team a player on the line of scrimmage before moving up to the second level, or he must go immediately to the second level. Whether or not he double teams a defender is based on a pre-snap call made either by him or one of his teammates. Different teams go about this in difference ways, and I’m not tuned in enough to Alabama’s terminology to know exactly what calls they make. But the key takeaway is that linemen don’t just decide on a whim whether or not to double team a defensive player … instead it’s always based on a call that is made once the offense sees how the defense is lined up.

When running the Inside Zone linemen generally use one of two types of steps to block a defender. The first is the drive step, which is simply a half step forward before engaging the defender. The second is the lead step, which is a half step at a slight angle toward the play-side. This type of step is typically used when the lineman is covered, but the defender is shaded slightly toward the play-side. This step allows him to achieve proper leverage.

The running backs aiming point tends to vary based on the specific play, but it will always be inside the tackles. Often times it’ll be the outside hip of the play-side guard, but that can change depending on how well that guard’s block holds up. Other times it’ll be a defensive player, typically either a defensive tackle (if the defense is playing a 4-3) or the MIKE linebacker. Depending on how quickly the defense flows to the play-side, the running back must choose whether to stick with his aiming point or cut it back, against the grain. What the running back cannot do is be a robot and just stick to his aiming point each play, no matter what the defense does.

Lets go back to last year’s SEC Championship Game for an example of the Inside Zone. The play occurs at the 1:56 mark of the 3rd Quarter, and begins at 1:34:51 of the VIDEO … although, once again, the replay proves to be more valuable, which begins at 1:35:13. 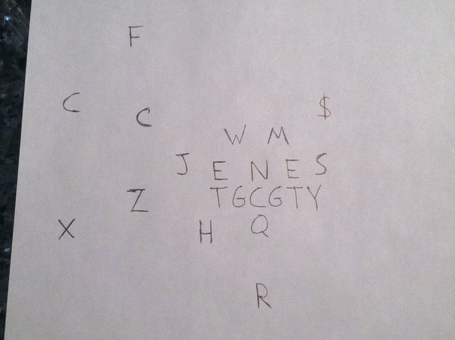 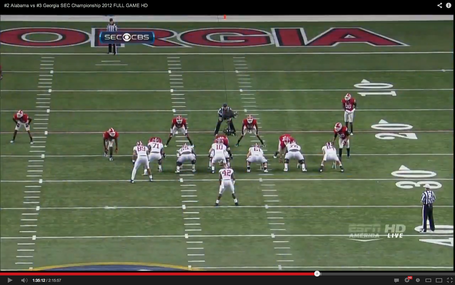 There are eight Georgia defenders in the box, and Alabama ends up blocking seven of them. Here is how each assignment breaks down.

The Y (Brian Vogler #84) drop steps, and then allows the SAM to engage him.

The RG (Anthony Steen #61) lead steps and helps double team the play-side DE. Then he peels off, gets to the second level, and engages the MIKE.

The C (Barrett Jones #75) lead steps and engages the NT.

The LT (Cyrus Kouandjio #71) lead steps (to the back-side) and helps double team the back-side DE. The he peels off and engages the JACK.

The H (Michael Williams #89) immediately gets up to the second level and engages the WILL.

The only player they leave unblocked in the FS. He’s lined up far enough off the ball where it would be tough to get a block on him, and if necessary it’s up to the RB to make him miss. 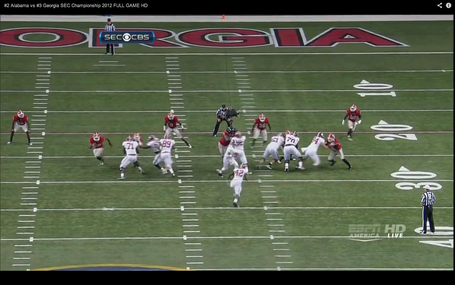 Every blocker executes their assignment perfectly. Jones, Steen, Fluker, and Vogler block up the play-side, while Warmack, Kouandjio, and Williams seal up the back-side, in case Lacy cuts it back. Lacy’s aiming point, as is often the case, is the outside hip of Steen, the RG. Lacy runs between the blocks of Jones and Fluker, all the while targeting Steen’s outside hip, which he is able to run off of once Steen secures his block on the MIKE. The FS fails to properly execute his run fill, and Lacy explodes through the hole for a nice gain. 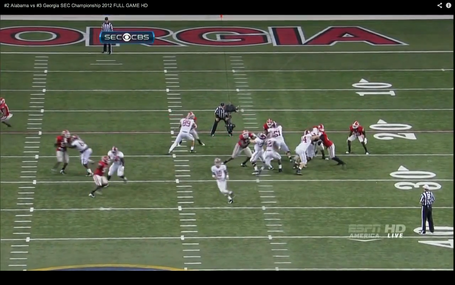