TRUNKATION: The Things You'll Be Glad To Know About Virginia Tech

Beyond the stats, outside the lines, and embedded deep within your brains, here are the essential things you need to know to get ready for the opener with Virginia Tech.

Share All sharing options for: TRUNKATION: The Things You'll Be Glad To Know About Virginia Tech

From: RBR Command Center
To: Ricky Muncie
Subject: TRUNKATION graphics
Hey Ricky, thanks again for the posts so far. The Manziel text thing was inspired, and we are still laughing at the news outlets that reprinted your "Saban Rule" piece.
But we really don't get the gist of this TRUNKATION thing. I mean, we do pride ourselves on being the "champagne of Bama blogs," and don't want to get a reputation for trolling like some sites have. 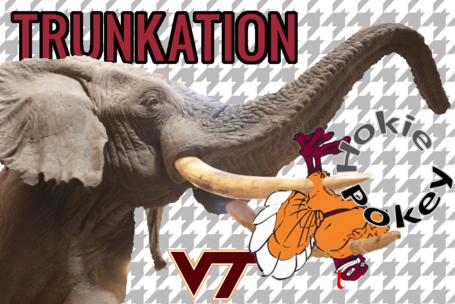 From: Ricky Muncie
To: RBR Command Center
Subject: Re: TRUNKATION graphics
Oh, the issue is with the graphics? Why didn't you say so?!?
This is merely an extension of the latest cognitive theories involving the reinforcement of key information. Just as audiences must be exposed to marketing messages multiple times, students retain information better when exposed to it through different genres.
The hidden purpose of TRUNKATION is to provide a flashpoint of memories, to aid the true Alabama fan's memory of key themes and statistics. (I hear that Phil Knight is experimenting with similar technology, but with rapid-fire images instead. I think he's just been bamboozled by the producers of "Chuck.")
Anyway, the pictures are harmless and educational. I'm sure you will see immediate increases in the already impressive Football IQ of the Crimson Tide faithful.
Cheers!
Ricky

From: Ricky Muncie
To: RBR Command Center
Subject: Re: Re: Re: TRUNKATION graphics
Would you ask Michelangelo to slap more fig leaves on people? Edvard Munch to make the Scream less noisy? Andy Warhol to be more inclusive in the flavors of his soup cans?
Good art stirs the heart to be sure, but truly Great art reinforces the narratives that shape our lives. Have you ever been in an old Catholic Church? Check out all those stained glass windows -- every one of them tells a story. The days of creation, the stations of the cross, the ascension, Noah's Ark, the goal-line stand, they're all there!
Okay, I made up that last one, but if Daniel Moore had been born 1,000 years earlier he'd have been working with glass on a parish payroll.
Keep staring at it, and the knowledge will seep within you.
Cheers!
Ricky

From: Ricky Muncie
To: RBR Command Center
Subject: TRUNKATION explained
Okay, you want some examples of the embedded knowledge?
Let's start with what you assumed was the Virginia Tech logo. In actuality, those were two letters, V and T, representing two very key numbers for understanding this game: 23 and 20.
In 13 games last season, the Hokies defense held opponents to 23 points or less on seven different occasions. Guess what -- those seven games were the ones Virginia Tech won. Every opponent scoring 24 or more beat the Gobblers.
Tech also returns a placekicker who knocked home 20 field goals last year, out of the 25 he attempted. He made 20, and missed 20% of the time. He can't afford to miss anything this coming Saturday, as they will need every point they get. Come to think of it, if they are even attempting field goals, it will be a long day for Coach Beamer.
So their game really boils down to offensive futility. If they are trying to win three at a time, they can't win -- and Bama's line to put pressure on the Tech offense is 24 points.
Cheers!
Ricky

From: Ricky Muncie
To: RBR Command Center
Subject: Re: Re: TRUNKATION explained
Gentlemen (and Lady,) with all due respect the turkey is rife with hidden meaning.
For starters, we reached back for a logo reminiscent of the rise of Virginia Tech as a serious contender. You don't have to go back any further than Frank Beamer, the longest-tenured head coach in the game today. Beamer has made his living with solid fundamentals, but his reputation has been cemented in the special teams play. For years, no team blocked kicks and scored in transition like the Hokies. After a while, the emphasis of social teams units came to be known as "Beamer-Ball."
Trust me, if anything screwy happens in this game, you will hear "Beamer-Ball!" from the crew in the booth. If Les Miles is known for clock bungles and chewing grass, then Coach Beamer puts the Special in Special Teams.
Except, well, lately he hasn't.
After finishing with the most efficient units in the nation in 2010 (according to the F+ scores,) Tech has been decidedly average to just-less-than in 2011-2012. They blocked fewer kicks in 2012 than Mount Cody got in a single quarter against Lane Kiffin's Vols.
The gobbler IS the identity of this squad -- yet everything about that identity is upside-down.
Cheers!
Ricky

From: Ricky Muncie
To: RBR Command Center
Subject: LOL Loeffler
Well, I was hard pressed to come up with away to subliminally evoke the most ill, grounded bird on earth. I needed it to represent Scot Loeffler.
The former Offensive Coordinator for the Auburn Tigers got kicked all the way down to the ACC, and it can't be fun on his part to prepare for Alabama for two consecutive games. His last outing ended up how again?
The good news is that Coach Loeffler is getting back his leading rusher and passer from last season. The bad news is they are both Logan Thomas, a once highly-regarded dual threat who just doesn't have the weapons around him. You might think that dual-threat guys would give Bama fits (think Newton, Manziel, Jefferson) but Thomas is behind a line with a combined 44 career starts (almost half from one guy,) and hit top three receivers gone.
Add in a rash of injuries, and players randomly asking or vacation... And this turkey is ready to be cooked.
Cheers!
Ricky

From: Ricky Muncie
To: RBR Command Center
Subject: Re: Re: LOL Loeffler
Thanks, folks. I won't let you down.
I'm saving this email chain somewhere on the site so we can refer to it later. Hope I find the right spot.
And I'm so excited, I'm not even waiting for the Bye week to get to work! 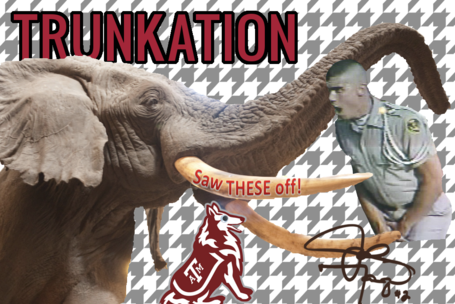 Cheers!
Ricky
(P.S. - I am saving this as an editorial guide for future reference. Don't publish this post.)