If Virginia Tech wins on Saturday it will likely be, at least in part, because Logan Thomas, the Hokies QB, played the game of his life. Lets take a closer look at the odds of that happening.

During his career at Virginia Tech Logan Thomas has proven to be something of an enigma. In 2011, his first year as the starting quarterback, he was quite good. He generated 7.71 yards per attempt, to go along with a 59.8 completion percentage, 19 touchdown passes, and 10 interceptions. In 2012, amidst talk that it might be his final year in Blacksburg, Thomas regressed significantly. His yards per attempt dipped to 6.94, while his completion percentage was a paltry 51.3. He threw 18 touchdown passes and 16 interceptions. In both seasons he was a strong runner, rushing for 469 yards in 2011 and 524 yards in 2012.

Physically, Thomas is impressive, standing tall at 6’ 6" and weighing in at 257. He won’t carve you up with his legs like a Johnny Manziel might, but he’s certainly a threat as a runner, which puts added pressure on the defense. As a passer he’s inconsistent and unpredictable. He has good zip on his short and intermediate throws, and he has a very strong arm that allows him to stretch the defense. On the other hand, his decision making, at times, leaves much to be desired. Too often he’ll try to force throws into tight coverage, rather than simply taking what the defense gives. Furthermore, he has a bad habit of locking on to his primary target on any given play, rather than properly going through his progressions. He’s especially susceptible to this when the play is designed to go down the field, often throwing into double coverage. 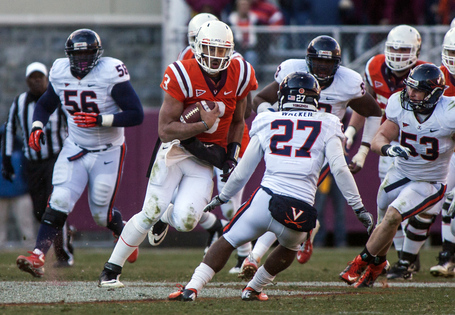 Loeffler runs a mostly pro-style offense that mixes in a little spread. His offense can be expected to huddle prior to most plays, as he likes to sub frequently.

When Virginia Tech runs the ball, I fully expect Thomas to be involved, at least some of the time. They’ll generally involve him in one of two ways, either by way of the zone read or the inverted veer. At times they’ll do this the conventional way, with Thomas in the pistol and a running back lined up behind him. Other times they’ll get a bit more exotic and bring a wide receiver or slot receiver in motion just prior to the snap, and run the option play between the QB and the WR.

Alabama will defend these plays in a couple different ways. The first, and most common, is that Nick Saban/Kirby Smart will give the defensive end being read a force call. If the coaches prefer that the running back keep the ball they’ll instruct the defensive end to take the QBs option away, and force the give to the running back. On the other hand, if the coaches would rather the QB keep the ball, the defensive end will be instructed to take away the give to the back and force the QB to pull it. This is more of a pick your poison strategy, rather than an actual defense of the play.

Additionally, Alabama may choose to gap exchange, or ‘scrape’. For instance, if the play is a zone read, the back-side defensive end crashes, signaling to the QB that the proper read is to pull the ball back and run with it. But another player, either a linebacker or safety, will ‘scrape’, effectively replacing the end and putting him in perfect position to make a play on the ball carrier. There are ways for the offense to counteract this strategy, to be sure, likely with what’s called an arc block.

Loeffler, traditionally, tries to use the run to set up the pass, so if Virginia Tech can establish the run early, expect to see a great deal of play-action. This is where Thomas will be able to put his arm talent on display, either by throwing deep posts or deep crosses. But again, pay specific attention to his decision making in these spots. He’s prone to going for the home run ball even if the defense takes it away, which may allow Alabama’s safeties to create turnovers.

When Virginia Tech passes out of spread formations expect to see traditional pro-style passing concepts. Thomas can make all the throws, whether it’s a shallow cross, deep in, fade-stop, etc. What Alabama will try to do is confuse him. I expect to see lots of zone blitzes, especially on passing downs, and this is where Alabama’s trademark pattern matching zone schemes should flourish. If the pass rushers can get just a little bit of pressure on Thomas it’s possible he’ll revert back to some of the bad habits he developed last year and throw into coverage, affording Alabama the opportunity to make big plays.

On defense Alabama is going to have some breakdowns. That much is inevitable. It’s the first game of the season and they’re replacing several key starters. It happened last year against Michigan, and on a few occasions Denard Robinson actually took advantage. The key for Alabama is to limit these coverage busts, because unlike Robinson, if Thomas finds the open man you can bet he’s going to hit him. That alone won’t be enough to overcome the talent disparity between Alabama and Virginia Tech. For that to happen Thomas will probably have to play the game of his life. That includes taking advantage of Alabama’s coverage busts, making NFL throws into good coverage, and making plays with his legs. Thomas is capable of all those things, but it has been quite a while since he has shown it. We’ll know soon enough if he is up to the task.