Top Plays of the 2012 National Championship Season: The Finale

With real, live football among us, it's time to vote a champion and finally put 2012 to rest.

Share All sharing options for: Top Plays of the 2012 National Championship Season: The Finale

After three rounds of unabashed gumping we have come to the most crucial question of our time — what is the greatest play of the 2012 National Title season?

It has been clear since November and December for weeks that McCarron to Cooper and the Yeldon Screen Pass were destined for the finale and you simply can't deny the importance or significance of either play. Without The Screen there (most likely) would not have been a Bama vs UGA SEC Championship game. And their certainly wouldn't be #15 without McCarron to Cooper. 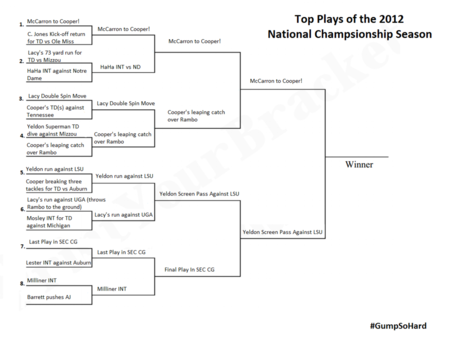