PHOTO: Alabama recruiting pitch is all about the NFL benjamins | CBS Sports

On one end of the recruiting spectrum, you have a coach and a program like James Franklin and Vanderbilt. The Commodores bang the drum -- and bang it repeatedly -- that the overwhelming majority of even SEC-caliber players never see a dime of NFL money, and that a quality education should be, has to be, the primary factor in choosing a college football program.

And on the other end of that spectrum, you have Alabama . If the NCAA wants to tell you that most of its athletes go pro in something other than sports, the Crimson Tide wants to tell its recruits that, well, they won't have to. Via ABC 33/40, a mailer Nick Saban and Co. are sending to recruits:

I freaking love this: 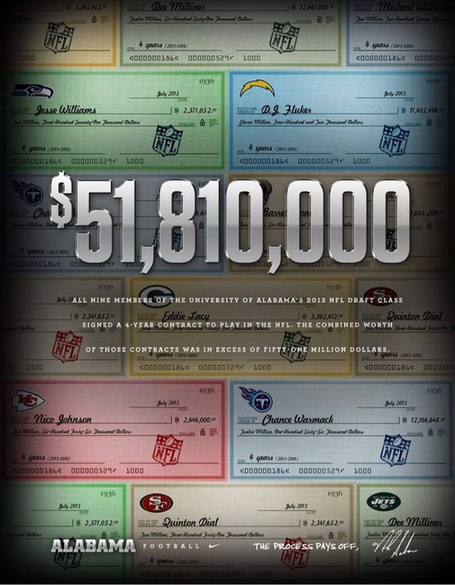 "It was OK," the former Vigor High star said during Sunday's Alabama Fan Day. "Around that time, my girlfriend was pregnant and I wanted to be there for her. That injury helped me be there for her."

"We call him Toodie," Fowler said, beaming with pride.

The San Diego Chargers have signed former Alabama linebacker Jerrell Harris to a free-agent deal, according to Chargers.com.

If there's one thing we know about Jerrell, it's that he doesn't have any quit in him. Best of luck to him as he tries to turn this stint into a full time gig.

Those are the words of a hungry man with fire in his eyes. Between these reports and the positive reports leaking out of practices about Cyrus Jones, I think I'm officially comfortable with our defensive back field. I have this nagging suspicion that this defense is going to be ridiculously good. People aren't going to know what hit them.

Here are some video links:

Cyrus Jones - Word is Cyrus is killing it out there in practice. Watching this video, he certainly looks the part.