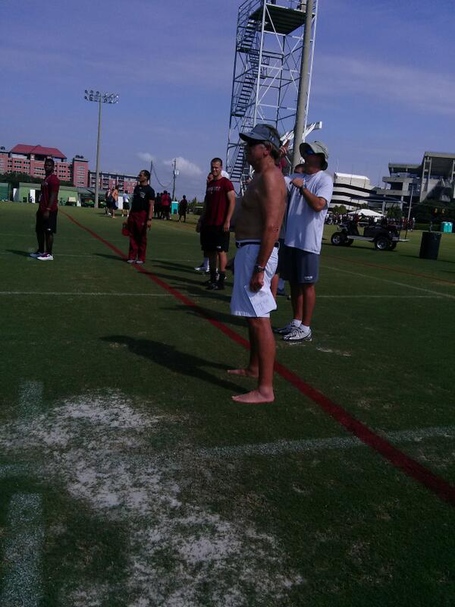 Look at that. Just take a minute to really appreciate the magnitude of the IDGAF attitude that just emanates from that picture. From the shoulder width, drunk uncle stance to the perfectly formed sock tan lines. This should be in a museum.

Manziel's attorney: Johnny will be the starting QB against Rice | CBS Sports

"I can't say much other than we're working through the process," Darnell said. "He's cooperating with the investigation. We think when all this comes out on the other send, he'll be the starting quarterback for the Aggies against Rice."

Boy, I hope Manziel's attorney made sure to put in a phone call to someone at College Station to let them know what the "Quarterback" portion of the depth chart would look like. Maybe it's just me, but it seems a bit presumptuous for the lawyer to word his response this way. If he had said, "we anticipate my client will be completely cleared" or something, that'd be fine. Saying it this way seems to take the decision out of the athletic department's hands and comes across as a bit of an overreach. Just my $.02.

"The players have to understand there's a couple things that are really going to affect their ability to continue to be successful," began Saban, whose team will seek a third consecutive national championship this fall.

"Complacency is one. Selfishness is one. And not playing attention to detail, not doing the little things right, not doing the things that got you there."

Saban said it is up to this team to create its standard of excellence.

The latest speaker to talk to the Alabama football team this month is New York Yankees manager Joe Girardi, who talked to the Crimson Tide on Thursday morning.

Girardi took the time on an day off for his team, which lost in extra innings Wednesday night to the White Sox at Chicago. The Yankees play host to the Detroit Tigers on Friday.

Is there any name that's too big to come speak at Bama? Just this week, Herm Edwards, Ray Lewis, and now the Yankees manager have all made appearances.

Competition at Alabama is stiff at tight end/H-back | AL.com

Vogler said he always has taken pride in having a strong work ethic.

"Just being the guy that's usually the first person to cross the finish line," he said. "I may not be the fastest, and I may not be the most athletic, but I do pride myself on hard work and just matching other people's intensity."

I would wager that most Bama fans won't know Vogler's name when the season starts. I'll wager that will change pretty quickly. This guy had a ton of promise as a recruit, and after a couple years of seasoning, I think he's ready to make some real noise.

The team practiced in full pads out in the scorching heat yesterday. LaMichael Fanning is still practicing at tight end. At this point, it seems that the "experiment" could very well result in a permanent move. Reuben Foster no longer had his left hand taped up. The team will practice once today, and will be scrimmaging tomorrow.