It was a good week for meltdowns as the passionate fanbases of Notre Dame, USC, and Florida took to the message boards to vent frustration over their respective teams' upset losses. Oh, and Tejas lost too. As always, nobody melts down like the 'Horns, folks. The standard PSA especially applies this week- the language below is offensive, vulgar, and may make you want to punch baby kittens. If you are easily offended I suggest that you point your browser elsewhere. You have been warned.

Baby Jesus wouldn't let them throw a flag because they bastardized his religion.

Aren't all these white boys 30 and married with 4 kids? Jesus.

Did I mention they are white?

I had never been a member of The Fire Diaz Fan Club, but sign my big ass up. Our defense sucks $#@! through dirty GI boot socks.

Our defense would fit right in with tecmo bowl trying to tackle bo jackson.

I'm getting high, who else wants to join me?

If someone puts a bullet in Manny's head and I'm on the jury. I'm acquitting.

Hey sunshine pumping Prius drivers! How does it feel? Bet my ass that you have already turned off the game. Diaz should be fired...but Ash sucks. Dumb mother $#@!ers. Ash is awesome. It's just the play calling.

My name is Mack Brown, coach of texas:

I once had Vince Young!

Nothing beside remains. Round the decay

Of that colossal wreck, boundless and bare

The lone and level sands stretch far away

One of the most pathetic performances I ever seen from this team. BYfuckingU gained around 500 yards on the ground. Burn this $#@! to the ground. There is no hope. $#@! you Mack and deloss

There is no accountability, there is too much coddling and Mack just seems apathetic in general. I imagine during half time the players were sitting indian style in the locker room eating peanut butter and jelly sandwiches while butter tooth brown read nursery tales to the players to inspire them to do greater things. It's going to be a longggggggggggggg season......sigh.

Any member of this coaching staff with an ounce of self respect would resign tomorrow. Since we all know that won't happen, here are the things I plan on doing before I watch another minute of a game that is coached by a single member of this pathetic staff:

a.) remarry my stripper exwife with no prenup

b.) get anally penetrated by Johnny Holmes

$#@! you Mack you dirty slut bitch clapping $#@!got thunder pussy.

Sick of losing to OU and Kansas state. Lets at least not get our $#@!s gaped when we lose to them. I'm sick of these players coming out flat for prime time games. Sick of the same generic pussy press conferences. Sick of OU winning conference champ every $#@!ing year. Sick of having to watch a supposed top 3 defense look absolutely helpless against the run. Sick of Mack Brown! EABOD Dodds

This is a team full of pussies

From our $#@!got QB faking a head injury. (He started by faking a leg injury)

Still whatever gets people to light Mack, Majors and Diaz houses on fire (with them in it), I'm down. Good $#@!ing riddance.

How much does Satan cost? How much? No NCAA investigations. Diaz ducks. Mack suxs. So does Ash who is supposed to not suck. Case sucks. Pay the money. Were about to get raped by a subapr OU. Go away Mack. Jesus

I was hoping he was actually talking about Satan. AKA Beelzebub, Lucifer, The Dark Prince, the Devil. That $#@!er could probably get some $#@! done. It might take some human sacrifices, but I'm willing to give up Espinosa, Echols, Manny, Mack, Dodds, and a handful more for the cause.

Ok rehab time: I was a sunshine pumper and thought we would compete this year. I thought our defense would turn it around and show up this season. I was dooped.

My name is CowboyFred and I'm a Texas football addict/sunshine pumper.

Just found out I'm HIV positive tonight. Got it from a toilet seat in a bar off Montrose.

It was the second-worst news of the evening.

Is this where we post if we are not going to another game until the band gets a twirler that doesn't look like a manatee? I'm getting used to watching the football team get ass raped, but I see no reason not to be able to see an attractive twirler in a skimpy outfit at halftime.

I have nothing but the utmost respect for Mack Brown.

Is what I'll be saying if he commits seppuku in front of the team at halftime.

Mack is a cancer. His pussy infects the entire team. Nothing will change until he is excised

jesus christ, Mack. You're out of your league. Deloss, please die, Mack please retire, and Manny, please go get $#@!ed by a woman (because obviously you're not into that).

Men aren't alligators, grass isn't water, and ball carriers aren't water buffalo. He is completely out of his element. No wonder our guys continue to bounce off tackles, grab for air, and in general play like pussies. They are coached by a pussy.

I fucking hate sports. Tomorrow I am going to get into like art or some shit. Something that doesnt shit on my soul every year 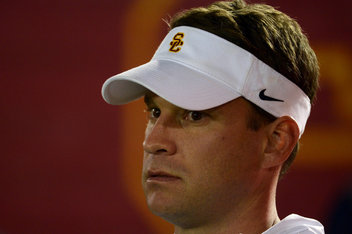 I think I figured it out. Kiffin is trying tank the season so we get a high draft pick. Maybe we can get lucky and snag Jadeveon.

College students rarely listen when you tell them to "wrap it up" to avoid mistakes.

look at it this way: if you cheer for SC this year, nobody can call you a fairweather fan when the team is good again someday…

seriously kiffin, go fuck yourself. I've defended you probably the longest out of anyone.

This is fucking pathetic. Throw the fucking ball down the field kiffin you fuckstick

I know he's saying "Kessler, Game Manager", but he sounds like "Kessler, Gay Manager" on my audio.

Someone keeps pressing the wrong button to get the RB to dive at the line of scrimmage.

Joke's on you. We lose, we're that much closer to getting a good coach. Also cirrhosis of the liver.

I think we saw a new phenomena tonight: prevent offense. We can christen this game The Great Bubble Screen of 2013 and put it to memory

Driskel threw his helmet down in anger but it was intercepted

I'd love to talk about how shitty my team is, but they wouldn't understand something offensive.

Hey look! An entire drive without a single flag!

Say what you will, that's fucking progress.

"How do you handle this if you're Will Muschamp?"

You beat Jeff Driskell with a goddamned axe handle in the middle of Ben Hill Griffin, is what you do.

Gameplan: Let's prove everyone wrong and show them Driskel is a real good QB!

Look, If Nolan Ryan gets lit up for 10 runs after throwing 8 wild pitches, his ass would get pulled. Yes, i know the difference between the two sports, but the point is, if you don't have it, YOU JUST DON'T FUCKING HAVE IT. Two years is enough. This is the EXACT same shit we dealt with all year last year. 11-2 was thanks to amazing defense. They SHOULDN'T be relied on to score points! At least TRY someone else.

How do you fucking take a sack? That was the dumbest god damn thing I've ever seen. Screw your fucking head on right. Be more fucking aware. Fuck.

Fitting ending there. This team is fucking pathetic.

This is the part where I make the alligator metaphor. Do you know how alligators kill their prey? It's not through the bite. The bite is just to get a hold on them. The alligator latches onto its prey, drags it down into the water, and just holds on tight until that poor fucker wears itself out and can't fight back anymore. Then the kill.

This has been the worst Florida game I've watched since forever

And by forever I mean 2 years ago. When it was worse.

We were so afraid of the endzone our own fucking corner ran out of bounds when he had an easy TD return on that interception. FUCK!

So I've been hearing rumors that the Jets will fire Rex Ryan to make way for Will Muschamp so that they can make a change without changing anything.

We should go 7-5 with this offense. Driskel shits the bed every time it matters, Pease is predictable, and the O-Line can't hold up in a stiff breeze.

This is going to be a rough year if we can't even beat Miami. Imagine what USC, LSU and UGA will do.

5 turnovers! Go gators! I thought for sure that last drive would've made it six, but Driskel messed up and couldn't spike the ball right. Man so close to six turnovers.

I just don't understand why we wouldn't kick the field goal there, after we already tried that swinging gate shit and fucked it up. This was clearly not the time to leave points on the field.

Watching a couple of deformed snails race would be more entertaining than watching this shit excuse of a thing we call an "offense."

EDIT: TYLER MOORE CAN SUCK A FAT ONE TOO

Aaaaaand Will Muschamp has just entered the final year on his UF contract. Let the search committee begin!

STOP STARING DOWN THE FUCKING RECEIVERS YOU FUCKING DUMBASS.

I've watched Connor Shaw, Aaron Murray, Tommy Reese and Devin Gardner play since I got home from SunLife and all I can tell myself is if I could have put any of those four guys' morning turds at QB for the Gators we would have won by two TDs.

Welp I'm gonna say it. I'm so happy that this game hasn't gotten so out of hand yet that Mussburger has to start eye fucking some beautiful girl in the stands.

I see that highly touted ND Defense from the NCG is still hanging around.

Temple's QB ran all over us, you fucking KNEW Gardner is mobile, WHERE THE FUCK IS THE SPY?

Could be worse, we could be Texas…

Where's the dating site for folks that like to drink, watch college football, and post stupid shit in Game Threads/IRC?

Okay, white RB is playing, compare him to Danny Woodhead…

Glad our secondary took the short bus to the game

Well Lou thinks we are still in this. You guys are so fucked Michigan.

This game is giving me a fucking heart condition.