One of the core concepts within Texas A&M's air raid offense is packaged plays.

Texas A&M has a great offense, in large part because they have talented skill position players, a strong offensive line, and a dynamic, Heisman Trophy winning quarterback. But what brings it all together is the scheme that was introduced last year by new head coach Kevin Sumlin and former offensive coordinator (now the head coach at Texas Tech) Kliff Kingsbury. That scheme combines traditional air raid concepts with packaged plays, and they consistently operate out of spread formations.

To put it in simple terms, the air raid offense combines a number of passing concepts (most notably Shallow Cross, Mesh, various screens, and ‘6’). These offenses are relatively commonplace, and can be found across college football and, more recently, the NFL. But one of the wrinkles that helps make TAMU so efficient on offense, almost always keeping them ahead of the chains, are their packaged plays.

The biggest problem for offensive coordinators and quarterbacks is that they can never know for sure what the defense will do once the ball is snapped. They can get a pretty good idea by watching enough film and finding tendencies, specifically based on the formation that the defense comes out in, but they can never know for sure. The defense can play Cover 2 for five straight plays and line up in a Cover 2 look on the sixth play, but at the snap of the ball, buzz their strong safety into the intermediate, middle of the field, and play Cover 1 Robber. The offensive staff and the quarterback could not have possibly known, prior to the snap, that they would do this, and it may catch them off guard and force a mistake.

Traditionally, the quarterback will come to the line with two plays called in the huddle. If the quarterback simply gets to the line, calls the protection, and snaps the ball, the offense will run the primary play. However, if the quarterback comes to the line, surveys the defense, and yells "KILL KILL KILL" (or some variation) the entire offense will know that the second play called is the one that will be run. This is what the vast majority of college and pro teams do, including Alabama. But there are still a couple of problems with this approach, the main one being that, after the ‘kill call’, the defense is still given the opportunity to adjust. The second is that it relies on the quarterback making the proper pre-snap read, which is susceptible to the problem discussed above – the defense may show one look, but do something entirely different once the ball is snapped.

Lets go back to last year’s game against Texas A&M for an example of each, beginning with a play that packages a short pass and a run. The play occurs at the 11:46 mark of the 1st quarter, and begins at 00:46 of the VIDEO. 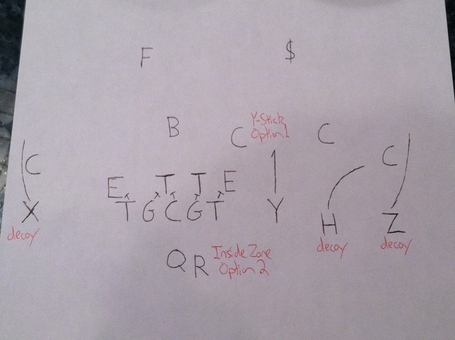 Texas A&M is in a four WR set, with a single WR to the left side and trips to the right side. The QB is in shotgun with a RB lined up to his right. Alabama is in their dime/sub formation (4-1-6), and they’re shifted toward the strong side of the formation. This play combines part of the Y-Stick concept with an inside zone. 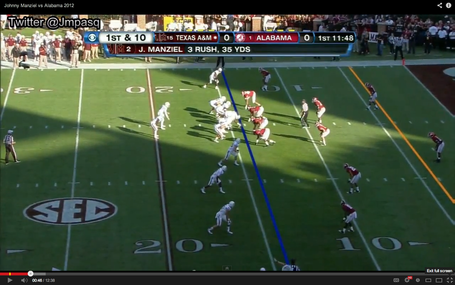 As noted in the sketch, there are only two options for the offense. The first option is the quick pass to the Y-Receiver. The second option is a zone run for the running back. The other three WRs are decoys, and the QB will not throw any of them the ball under any circumstances. On the whole this play is pretty simple. When the QB gets the snap he’ll look to his right to see if the Y, running a short hitch route, is going to be open. Meanwhile the offensive line will begin zone blocking. If the Y is open the QB will throw him the ball. If he isn’t open the QB will turn and hand the ball off to the RB.

In this particular play the key is the defensive back (Vinnie Sunseri) lined up to the strong side, and that’s who the QB will be reading. If he stays home then the Y should be open. However, if he moves over to cover the Y, that should open up a running lane for the back. 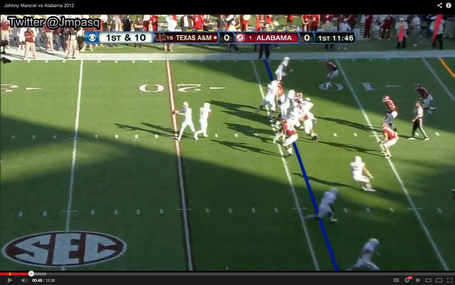 Sunseri doesn’t move over to cover the Y, and Manziel throws the ball quickly and the offense picks up an easy six yards.

Here's an abbreviated look at the same play, except this time the QB hands the ball off to the running back. The play occurs at the 15:00 mark of the 3rd quarter, and begins at 1:18:34 of the VIDEO.

Both teams have the exact same personnel on the field as the play above ... the only difference being that the offense has their trips lined up to the left and their single WR lined up to the right. Initially Vinnie Sunseri is lined up inside. 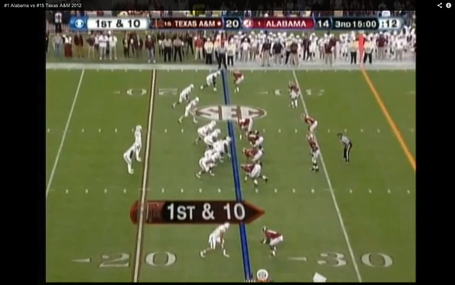 However, just prior to the snap, Sunseri moves to the outside and aligns himself with the Y-Receiver, in an effort to take away the quick hitch (one of Alabama's halftime adjustments becomes apparent immediately). 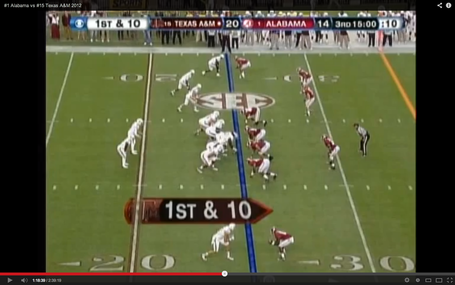 After receiving the snap Manziel looks to the Y, sees him covered, and hands the ball off to the RB. 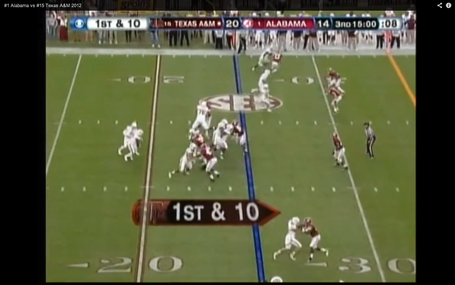 Keep in mind that within this sort of play there are many variations, specifically when it comes to the type of running play called. It could be a run for the QB rather than for the RB (especially when you having a mobile QB like Johnny Manziel) and the blocking schemes may be different. But the basics remain the same … the first option is a short pass and the second option is a run. Texas A&M ran some variation of this play at least ten times against Alabama last year.

Next lets look at a play that packages a short pass and a wide receiver screen. The play occurs at the 2:31 mark of the 1st quarter, and begins at 03:09 of the VIDEO. 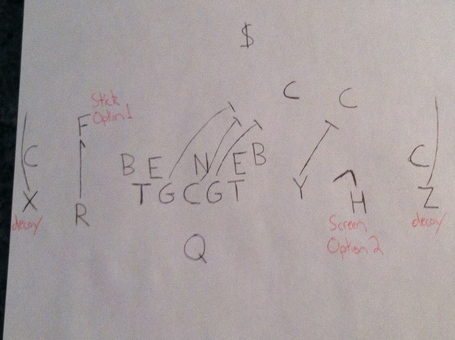 Texas A&M is in an empty set, with two WRs to the left side and three WRs to the right side. The QB is in shotgun. Alabama is in a dime/sub formation (3-2-6). They’re blitzing and playing man coverage across the formation with a single high safety. Once again this play uses the Stick concept, but this time it couples it with a WR screen. 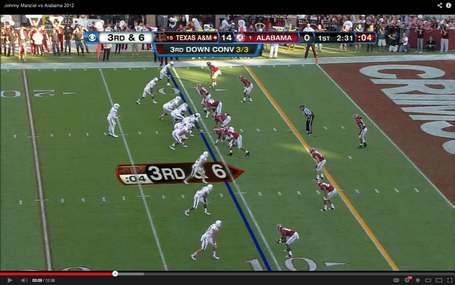 Manziel gets the snap and immediately looks to his left at option number one … the stick route. Because the defense is in man coverage the option is not there. Meanwhile, both guards, the center, and the Y begin to set up their blocks for option number two. 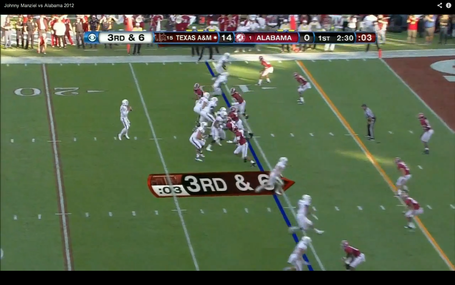 Upon realizing that the short pass isn’t open, Manziel snaps his head around and throws the slip screen to the H-Receiver, who breaks a tackle and picks up the first down. 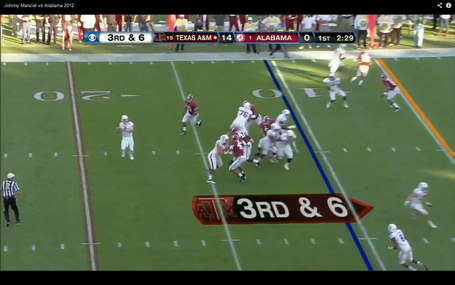 As is the case with the first play we looked at there are many different variations of this concept. Different formations can be used … 5 WR, 4 WR, and 3 WR sets work with this concept. Additionally, the screen can be to a running back rather than a wide receiver. But once again the basics remain the same … the first option is a short pass and the second option is a screen.

These types of plays are especially effective in a HUNH offense, when the tempo forces the defense to be quite vanilla, thus preventing schematic adjustments that could take away both options. These concepts serve, first and foremost, as a consistent chain-mover. Furthermore, should the defense attempt to take away both options by committing more players closer to the line of scrimmage they leave themselves vulnerable on the back end. If the play-caller (or QB, depending on what adjustments he’s allowed to make) senses that the defense is cheating to take away both options he’ll dial up a vertical concept out of the same formation (e.g. Deep Y Cross), which is likely to result in a big gain.

Packaged plays, when run correctly with the proper personnel, are quite difficult to defend, and I think we’re all excited to see what Nick Saban and Kirby Smart have planned.