Cornerback should be a strength for the Aggies but what about Safety?

Leading up to the 2013 football season many of us gumps expected the Alabama passing game to be the focal point of the Crimson Tide offense. With a rebuilt offensive line and a plethora of talent at the skill position, AJ McCarron and the 'Bama wide receiving corps seemed poised for a break out year.

Unfortunately, all the hype quickly crashed to a halt midway through the 2nd quarter against Virginia Tech. Blocking issues up front led to hurried throws by AJ McCarron and miscommunication on routes between the quarterback and wide receivers resulted in multiple dropped passes and one interception. Simply put, the Alabama passing attack two Saturday's ago looked more anemic than domineering. There is still plenty of time for the 'Bama offense to redeem themselves and this Saturday looks to be perfect time to do just that.

If Alabama has any hope of redemption against Texas A&M, the passing game (and offensive line) must live up to the preseason hype. Amari Cooper must demand double teams and Christion Jones, Kevin Norwood, Kenny Bell and DeAndrew White must be able to take advantage of a somewhat depleted A&M secondary.

For A&M, the defensive back field, especially cornerback, was also expected to be the strength of the defense. Leading the charge for A&M at cornerback is 6-0 185 lb junior Deshazor Everrett. Deshazor is an All-SEC type corner and his stats from 2012 are impressive to say the least.

Started in 12 of 13 games, missing the Louisiana Tech game due to injury ... saw action at safety and cornerback ... contributed 56 tackles, including 31 solo stops ... intercepted two passes for 26 yards, returning one for a touchdown ... broke up nine total passes ... had a career-high nine tackles against Missouri, just one less than his 2011 total ... contributed a career-best six solo tackles against No. 6 LSU ... had 3.5 tackles for loss for a total loss of nine yards

Tide fans may recall Everrett from this unpleasant memory from 2012.. 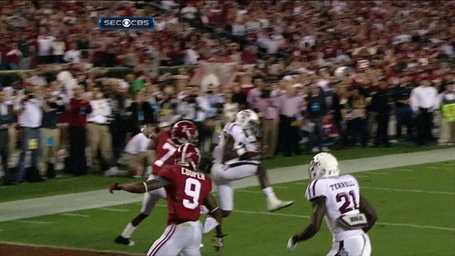 Opposite Everrett is sophomore CB De'Vante Harris. As mentioned many times before Harris was one of the four A&M players suspended just before the Rice game and he will see his first action of the season against Alabama. In 2012, Harris recorded 30 tackles (2.5 for loss), one interception and three PBU's. But the question mark for the Aggie defensive back field won't be found at cornerback, but rather at safety.

With the news that junior safety Floyd Raven will miss the game due to an apparent collar bone injury, junior Clay Honeycutt will most likely be called on to fill the void. Honeycutt was a three-star duel threat QB coming out of Dickson, TX but was quickly converted into a safety. He saw action in only one game in 2012, recording one PBU. However, in 2013 he has already reeled in one interception and seven solo tackles. Opposite Honeycutt at strong safety is junior Howard Matthews. Matthews played in 12 games in 2012 and and looks to be on his way to a strong campaign in 2013.

I would assume (hope) 'Bama will use plenty of 4-5 wide sets which should allow for senior Toney Hurd Jr. to see plenty of playing time as the nickel back. Unlike Honeycutt, Hurd saw plenty of action in 2012, playing in 13 games recording 67 tackles (4 TFL), 1 INT and 1 PBU. Looking at Hurd's highlight's from 2012 he seems to be an absolute missile in run support.

Backing up the starting five is a ton of green grass. Looking at the depth chart for the game this Saturday, only one player, senior Tramain Jacobs, has seen actual non mop up duty playing time. The rest are just freshman and sophomores. I won't even pretend to know much about these players but I'd have to believe the thought of A&M having to dip that deep into the well in such an important game would send shivers down the back of any Aggie fan.

With temperatures expected to reach the mid to upper 90's, depth will most certainly be a cause for concern on both sides and A&M can't afford any injuries in the defensive back field.

A&M fans don't seem to be all that concerned with the loss of Raven but you have to think Alabama is planning on attacking the inexperience at that position. At any rate, the success or failure of the Alabama passing game vs the A&M secondary will go a long way in determining the outcome of the game Saturday afternoon.

Hope for the best, right?