The Goalpost Goddess: Johnny Football and a Test of the Emergency Broadcast System

“The idea of molding men means a lot to me.” ~ Coach Paul “Bear” Bryant

Share All sharing options for: The Goalpost Goddess: Johnny Football and a Test of the Emergency Broadcast System

There has been a lot of talk this week of what would have happened if The Bear had been able to get ahold of Johnny Foosball. As the Fox article pointed out, Coach Bryant had the original version of JFF right there in Tuscaloosa and before the team even had a chance to check their FaceSpace status Coach had already suspended Joe Willie for the final two games of the 1963 season and that was for RUMORS of drinking two beers during an OFF WEEK!!

I won’t even begin to speculate what Coach Bryant would have done to JFF if he were to have to face his nonsense these days but his words about Joe Namath were as follows:

"I don’t guess anybody would think much of what Joe did nowadays, including myself," Bryant recalled in 1980, three years before his death. "But he was supposed to be a leader, so he had to live by the rules. It was the hardest thing I ever had to do, and it was to the greatest athlete I ever coached."

This week we celebrate the Anniversary of Coach Bryant’s birthday. He’d have been 100 years old yesterday. I detest that the anniversary of such a legend has been tarnished by such evil as what occurred on 9/11/01, but I am glad that the Bryant Museum is going to be celebrating his legacy with an Ultimate Fan Contest (www.323wins.com) and with the Centennial Celebration (www.bryant100.com) where you can enter your own Coach Bryant stories and have access to videos, quotes, stories from other fans and check the calendar for updates regarding events surrounding the celebration.

EDITOR’S NOTE: This is a test of the emergency broadcast system… this is only a test… please stand by….

<blockquote class="twitter-tweet" data-partner="tweetdeck"><p>Live every day like its your last because you never know when Charles Robinson will come knocking on your door.</p>&mdash; BourbonGhost (@BourbonGhost) <a href="https://twitter.com/BourbonGhost/statuses/377905700921671680">September 11, 2013</a></blockquote>

My twitter feed started looking like gloom and doom, I had to leave, sign out, get the heck out of dodge else I fling myself into oncoming Atlanta traffic…

We now return you to your regularly scheduled programming….. thank you for your patience.

I’m having a hard time with continuing on the Johnny Manziel bashing when we’ve potentially got the NCAA breathing down our necks. This all sucks, I’m so mad I could spit nails and it’s starting to spill over into my personal life. I’m a CHICK, this stuff isn’t supposed to spill into my personal life, it’s "just football" most of my girlfriends would say. To which I would answer, "It’s my University, my Alma Mater, The Capstone, and it seems they’ve gone and allowed themselves to get into trouble with some not so scrupulous people."

Plus, Luther Davis, what is up with you, dude? Did someone tell a bad "Yo, mama" joke? Did your bed have bugs in it? What is UP? Did your ring not get as much money at the pawn shop, bro?

Look, I got a whole lot invested in these past few seasons; I’ve been telling my daughter that she would be able to be as proud as I was of this University. She would be able to hold her head high instead of the halfhearted mumble I gave after the scandalous "dark times" we faltered through between Stallings & Saban. I wanted to be able to say that ‘Bama was back and was going to at least keep their nose clean while they were up there. I do NOT want to eat the words we’ve been feeding all these other teams over the past few years. Humble pie doesn’t taste good. I’m a bit of a foodie snob and I only eat my humble pie when there’s a heaping helping of Championship Stew served alongside.

So, y’all, forgive me for the lack of insight that I have to give today. Forgive me if I haven’t much to say except that I’m glad that it seems that the University has a bit of a head start on this as evidenced by the statement released by Athletic Director Bill Battle:

"We have been aware of some of the allegations in today's story and our compliance department was looking into this situation prior to being notified that this story was actually going to be published," Battle wrote. "Our review is ongoing. We diligently educate our student-athletes on maintaining compliance with NCAA rules, and will continue to do so."

And apparently Coach Saban is already tired of talking about it, too:

"I’ve already answered it three times, so who else … Can we get in a line and everybody asks a question?" Saban said. "We will handle it appropriately. Bill made a statement. This is an administrative issue that our leadership will do a very, very good job of managing."

So, before I get an even more burning feeling in the back of my throat, I’m going to leave you with a picture of our amazing RBR Beau and bid you all a great weekend, don’t forget to work on your Hoodoo for tomorrow & keep all those poor Aggies in your thoughts as I travel to College Station, they won’t know what hit ‘em. 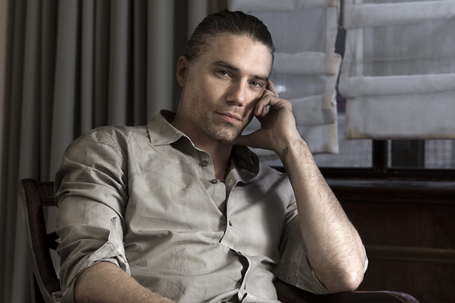