This week's edition of our shameful revelry in the misery of others.

This edition of "It's Meltdown Time!" will feature the fanbases of Texas, Nebraska, and Wisconsin. As usual, the 'Horns rule the day, seemingly going out of their way to type the most unconscionable things imaginable. Weekly PSA applies: the language below is horrible. It's vile, disgusting, perverse, offensive, vulgar... get the point? If you read further you will very likely be offended. You have been warned.

For some context, the Wisconsin meltdown centers around the bizarre ending of the Badgers' game at ASU where everyone stood around and watched the final 18 seconds tick off the clock, with the Badgers on the ASU 15 down by two. Have to say, it may be the strangest ending to a game in some time. Enjoy it and the meltdowns below. 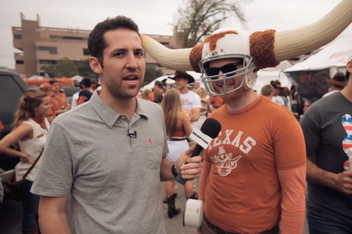 At halftime someone must have injured Bo Wallace's leg and converted him to Mormonism.

3rd and 9, throw it 4
and the real herpa derp has arrived.
we're fucked

Not sure who those impostors were earlier, but here is the Mack Brown Texas Football that I remember!
Go MBTF! choke on a dick.

I just ran out of coke. But I've still got more crown. This day will be over soon.

wide the fuck open on 3rd and 7 gay

Crowd can feel it... A big colon blow again

come the fuck on major you really cant be calling this fagget assed bullshit. fucking hell.

Maybe we can all just collectively shift the fanbase to OSU. The combination of our numbers and that old white guy's money could be mighty potent. Go pokes?

No more coaches who's names have Mack in them...Mackwilliams, Mackovick, Mack Brown...NO MORE. Scott just ran like a smurf past everyone. Jesus. We are dead.

looks like I picked the wrong week to quit methamphetamines

Take the goddamned numbers off the helmets.
I would spit in Mack Browns face if I saw him in the street. You should be ashamed, sir. You and all your burnt orange ass kissers like Peter Bean.

What's in a hotty toddy? I need a fucking drink. About the best thing I can say about this program is that, as far as I am aware, they are not covering up the systematic assraping of young children.

I hope Mack dies in his sleep tonight

aborted babies are in better shape than the state of this program.

gonna go drink drano now. thanks Mack you butter toothed fuck
Fuck Yeah!!!!! I don't have the longhorn network. I knew there was a bright spot.

After the game, the wife and I heard several loud pops from different directions. "Suicides?" "No, fireworks." Do Jews celebrate Yom Kippur with fireworks?

267 yards rushing
and so many last week. faggot can't even say the number from last week, 550 MOTHERFUCKER

REPORTER: Mack what happened out there?
MACK: I wasn't watching. I need to see the tape and I will try to pull something out of my ass to help me explain it on Monday.

Burn this motherfucker to the motherfucking ground. Fucking North Dakota would push our shit in fucking deep.

I'm struggling to come up with 10 teams that I would wager money on us beating.
Here's another shot. "To Syria gassing the entire athletic department..."

These 502's are really hurting our meltdown contributions.
Shove that game tape up your ass, coach who doesn't know any x's and o's.

This what it's like to be a aggie fan. We were relevant for a time. Now we are the little brother

I was consoled by an aggy tonight. Is this what rock bottom feels like?

I spent 2 hrs in church yesterday morning for nothing. Thinking of becoming a Pastafarian.

I was drunk by the tennis courts and caught the first half with some kind folks under an oak tree. I then wandered to Dog and duck where my ranting garnered cheers and a polite request for me to leave.

My mom could literally coach this team better than this sorry sack of shit... We were Texas and Fuck You MBTF... FUCK YOU!

The guy doesn't deserve any of that fuckin "praise" or whatever the self-righteous pumper jackasses on here have been spewing. He has brought us back to rock bottom and it's all his fuckin fault. He's had several opportunities to avoid this, so fuck him. He has demonstrated he doesn't give a shit about anything Longhorn and is just banking his 5 million/year.

Sometimes I fill my bath tub with ketchup and pretend I'm a meatball.

I hope bedbugs bite your liver spotted shins while you try to sleep tonight, you fraudulently rich old fuck!

Mack Brown thinks Gigli should have won an oscar for Best Screenplay.

Thanks for pissing in Manziel's face, mack! What, no response?
Fuck you mack, you senile pussy!

Thanks for pissing in Bo's face too, mack! You fucking idiot! God Damn, gete fuck out!!!!
Fuck you mack

Just fuck you Mack. GTFO already. Resign at halftime and we will play without a head coach.
Faget bitch.

You should find a large rusty nail and ram it down your urethra.

Anybody got a fuck you mack brown mobile wallpaper?

Fuck this shit. I've supported Mack for far longer than I should have based on what he's done for the program, but enough is fucking enough. Get the fuck out and don't let the door hit you on the way out. I don't even wanna think about what an offense of the caliber of Tech or Baylor is gonna do to us as the season rolls on. Sorry, liver, but you're gonna suffer mightily before January rolls around.

someone needs to investigate if Bo Wallace is being paid by Pantene Pro V shampoo and conditioner. His hair is lustrous.

so pumped for Women's Soccer season.

This is weird. I'm actually proud of our defense for being physical enough to get penalized.

Well...beck and Papsmear are all ours for years and years

Everything is alright. We're going to win 9 games games again this year against not so great competition and go to a bowl game. Right guys?

it's called shi%^ing the bed. We like to piss things down our legs.

I challenge anyone to find a team that can go 3 and out in 17 seconds of game time as consistently as we do.

The standard season for us will always be beating the weak teams, sh#$!*ng the bed against good teams, and occasionally falling ass-backwards into a conference championship where we get stomped in front of the nation

Same story. Lack of pressure, offense going conservative after a lead. It's almost like the coaches don't read this board.

Bozo will never change. 3 mil a year for this clown. Amazing.

I think I need to be alone for a while

The student section is wearing black, but can we still call them the Sea of Red? The Sea of Black sounds like some nasty venereal disease you'd get from a long weekend in Colorado.

Games like this give me deja vu. Not just the deja vu of "oh remember that other game where Nebraska gagged on dick down the stretch" but this blurry feeling of dread where in a dream years ago you have seen this before, but this isn't even the disaster. Oh no, the disaster is coming still, sometime later. Later today? Tomorrow? Next week? I don't know, but holy fuck I cannot escape the sensation of absolute doom. Fuck.

WOOOO. Fuck the sun is coming out I hope I dont get sunburned

Just completely disgusted with our team. All I'm asking is for 1 full game of football, but fuck it, I'm out. I know this story all too well.

At least if it was a prime-time game, I could have cried myself to sleep.

I swear to god Lane Kiffin is coaching at Nebraska...

I guess it's good I'll be working Saturdays the rest of the season. This just hurts, and not in a good way. 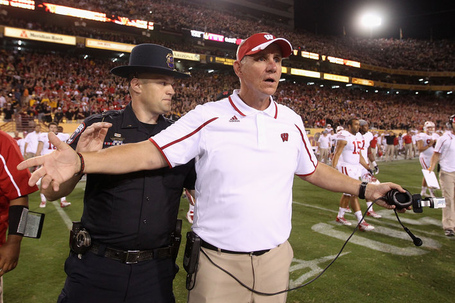 Good lord. I've seen it all. I don't get worked up about these games much any more. But I'm shaking. I don't think I've ever seen a hose job that bad. I don't believe it. Un-fucking-real.

please, can we for a moment forget Stave's questionable "knee" and focus on one of the most ridiculous botchings in the history of officiating?! Those incompetent shitheads should not have jobs by Monday.

Jen Bielema just tweeted: "@jenbielema #karma"
Slut will get her karma when Les ass rapes her pig farmer husband in a few weeks.

Don't worry guys, the Badgers will somehow miraculously find a way to get to and lose the Rose Bowl.

Did Wisconsin teams insult every referee's mothers at one point?

What the fuck was that you fucking PAC 12 ref assholes

I think I just got evicted for screaming too loud

This game should be fucking ours. I've never seen bullshit of this magnitude. FFFFFFFFFFFFUUUUUUUUUCCCCCCCCKKK.

I stayed up to the bitter end at 2 goddamn AM for this bullshit?
Fuck this noise.

Just to be clear,
if we had a decent goddamn kicker none of this would have been necessary.