Only a decade ago - even less - Tennessee-Florida was a war, year-after-year one of the biggest college football rivalries in the nation. In 2013, however, any week where Tennessee-Florida is even arguably the best SEC game of the week is a week that is bereft of big SEC games. Got us a bereft week here, y'all.

Share All sharing options for: SEC Games to Watch │Week 4 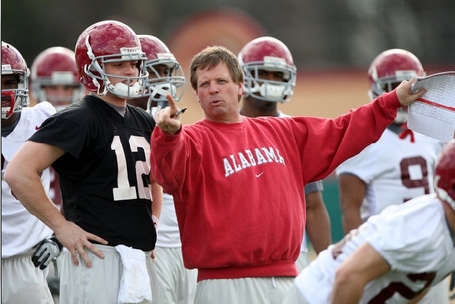 Jim McElwain will get a fond welcome back to Tuscaloosa, but his Rams won't. Colorado St. performed semi-respectively - for a team at their level - in competitive losses to Colorado and Tulsa and a relatively easy win over Cal Poly, but "team at their level" is the key phrase. Alabama, on the other hand, is at Alabama's level. It's high time the Tide get a cupcake, and the dessert hour has arrived. Despite CSU's cupcake status, the Tide is more interested in working out the kinks than in showing their best game, so I wouldn't be anxious to lay the 39.5 on this one.

Auburn has played a somewhat tougher schedule that probably makes up for the 40 yards per game difference favoring LSU in the two teams' offensive stats, but not for the 433.7-267.7 difference in yards per game allowed, which explains why LSU is rightfully a solid favorite in this game. But it wouldn't be surprising if Auburn is competitive: as we know, they played their best game of the year in 2012 against the other Tigers, probably a sign that they match up well. I wouldn't bet on this game, but if I did I think I would take the 17.5 and go with Auburn.

Tennessee has to be a bit shell-shocked after the beat-down they took against Oregon last week, while Florida had a week to prepare for the Vols (and to recover from their sloppy loss to what was probably an inferior Miami team). So maybe Tennessee won't be able to recover their poise, and maybe Florida worked something out during the off week.

Indiana is a tough team to figure. Last week they pasted Bowling Green, who looked like the class of the MAC in beat-downs of Tulsa and Kent St., by a 42-10 score . . . but the week before that they lost to Navy. The Hoosiers are throwing up a gaudy 571.3 yards per game, but they're also surrendering over 400 a game even though their schedule to date consists of Indiana St., Navy and Bowling Green.

Missouri has wins over Murray St. and Toledo, so the trip to Bloomington will be their stiffest test of the season. But let's get real, a trip to Bloomington should be no sort of stiff test for an SEC team. Missouri had injury problems to blame their difficult 2012 entry into the nation's toughest conference on, but if they want to earn their SEC ticket in 2013, it better get another victory hole punched in it this week. This is middle SEC vs middle B1G. I would take Missouri and give the three points.

This time last year the Arkansas program was in turmoil, to put it lightly. Coming off a loss to Louisiana-Lafayette and utter destruction from Alabama in a game that was not as close as the 52-0 score, with Bobby Petrino nursing his bruised face and ego, John L. Smith doing everything but wearing a clown suit to games, and beset by injury, the Razorbacks could not prevent the Scarlet Knights from riding out of Fayetteville with a 35-26 win that was a rare victory for a Big East team over an SEC team.

There won't be any more such, as the Big East no longer exists as a football conference, but Rutgers is in the running for the last ridiculous automatic Big East BCS bowl berth as that berth goes this year to the Big East's successor, the new American Athletic Conference. Their one loss, a 52-51 road overtime loss to Fresno St., in no way, shape or form should be taken as an indicator that Rutgers isn't a solid contender for the automatic berth. All they have to do is beat Louisville on October 10, and is Louisville really all that and a bag of chips, or is it their hype based only on the bowl win over a Florida team that was sunk more by its own quarterbacking than by Louisville's?

That's off the subject, but sue me. What's on the subject is that Arkansas needs to win in Piscataway for the respectability of the Bielema regime just as badly as Missouri needs to win in Bloomington to be eligible for SEC-ness any time soon. Those two games will go a long way toward determining how presentable the SEC's depth is in 2013 - but conference depth is all it will show. Realistically neither Missouri nor Arkansas has any chance of barking with the SEC's big dogs this year.

As for this game, the oddsmakers have it as a toss-up, and that's probably a fair assessment. Don't bet.

It took a Garrett Gilbert TD pass with 12 seconds left last week to lead SMU to a 31-30 win over FCS foe Montana St. But Montana St. was the #3 FCS team, and SMU was semi-respectable in an opening loss to what may be a decent Texas Tech team, staying within 20-16 before the 4th quarter of a 41-23 loss, so SMU isn't completely horrible like, say, Massachusetts.

Nevertheless, this is not a team that should be able to hang with Texas A&M, who may confidently expected to score at will against an outfit that gave up a 36.0 ppg average to the aforementioned Montana St. and Texas Tech. Unless TAMU is suffering from a severe post-Bama-game hangover - which ain't a rare event - this is a rout. But while SMU has no chance of actually winning the game, it's not beyond the bounds of possibility that they could hang around and embarrass the Aggies with a competitive game.

Possible, yes. Probable, no. The spread is 28.5, and that's not much at the rate A&M scores. Lay the points.

Vandy looked downright Vandy-esque last week in the 35-25 loss to South Carolina that was only made to sound close by a 15-0 4th quarter in Vandy's favor. On the other hands, Massachusetts is abysmal, averaging only 7 points a game in an 0-3 start against Wisconsin, Maine and Kansas St.

Vandy is probably the only SEC team that would ever go to Massachusetts for an away football game. They arrive as a 32-point favorite, and while they should blow past the Minutemen easily, 32 is too much for a comfortable bet, nor is it wise to bet on UMass at almost any spread. Lay off.

The Bulldogs are off to a tough start, but realistically the neutral site loss to Oklahoma St. and the road loss to Auburn aren't enough to definitively show they are inferior to the average-ish 2012 version. Troy, on the other hand, shows firm signs of being a middle-of-the-pack Sun Belt team.

It says here that Dak Prescott is an upgrade for the injured Tyler Russell and should keep the job: Russell is talented but plays too cautiously against tough foes-and the Bulldogs always have a heaping helping of tough foes on the schedule. I like Mississippi St. to cover as a 14-point home favorite.

They don't pay me enough to analyze this game. The spread, at 32.5, is not huge, but neither is Georgia's incentive. I wouldn't care to wager on this contest.

Real life made me miss this column last week, but week before last my picks really weren't as stupid as it seems, I promise - but I went 0-3 against the spread. I'm 2-3 on the season.