Random Thoughts From Around the Country: Week Four

Lotsa teams caught looking ahead. Lotsa other teams trying to impress the cute girl in class by beating up the wimpiest kid.

Share All sharing options for: Random Thoughts From Around the Country: Week Four

It wasn't too long ago that scoring 70+ on an opponent was unheard of. Nowadays it seems like a weekly event. If you read my little rant on Saturday, you may realize I have a distaste for these match-ups: 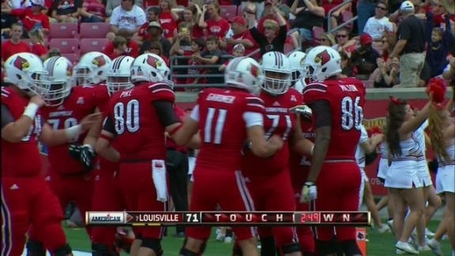 #4 Ohio State 76 Florida A&M 0 - I would expect as much from Urban Meyer and his classy outfit in Columbus.
#7 Louisville 72 FIU 0 - Louisville is trying to overcompensate for their WEAK schedule (sorry, it's not gonna work).
#16 Miami 77 Savannah State 7 - Miami will be Miami.
#20 Baylor 70 LA-Monroe 7 - Baylor had two pick-6s and a kickoff fumble recovery in the first quarter so I guess I can excuse Coach Art Briles for leading 35-0 after 15 minutes.

On the other side of the mismatch quarter was a few SEC teams who looked less-than-SEC calibre:

Of course all of this is fodder for the SEC-haters out there. However, the Big 10 had a few team come out flat as well:

° Boise State is now 2-2 for the first time in a long while. However, now we are stuck listening to all the wonks talk about Fresno State being this year's mythical "BCS-buster". Sigh.

° Georgia Tech has quietly rolled to 3-0. Could their triple-option offense sneak up on Clemson come November 14?

Coming Up:
#12 South Carolina at UCF - the Knights are 3-0 and starting to get some votes after upsetting Penn State in State College. (11am CT, ABC in most southeast markets)

South Alabama at Tennessee - Everything says that this should be a cakewalk for the Vols but don't fall asleep on coach Joey Jones and the Jaguars who beat WKU last week. It sure doesn't get easier for UT after this game: Next three games: UGA, USC, @Bama. Brutal. (11:21am/12:21pm, SEC TV)

If you are a college football junkie and find yourself in the Research Triangle, here is how you should spend your Saturday:

* Kickoff time for Alabama and Georgia State will be 11:20am CT/12:20pm ET, October 5 at Bryant-Denny Stadium and televised by the SEC TV (click here for a pdf of your local affiliate).