The Ole Miss offense looks poised for a very big year. Lets take a deeper look at what makes them so effective.

Share All sharing options for: Preview: The Ole Miss Offense

There has been lots of talk this week about similarities between the Ole Miss offense and the Texas A&M offense. For the most part this talk has been misguided – the only similarity between the two is that they both fall within the umbrella of spread offenses. Aside from that they’re quite different. Ole Miss employs a balanced spread attack, one that can beat you both through the air and on the ground. What it doesn't include is the backyard football element that helps to define Texas A&M. They almost never huddle – either snapping the ball immediately after getting to the new line of scrimmage or checking to the sideline after initially lining up. Against Vanderbilt they passed 47 times and ran 37 times. Against Texas they passed 27 times and ran 45 times. One can’t be sure how their play-calling will break down on Saturday, but my guess, based on the current state of the Alabama defense, is that we’ll see a fair amount of passing from Ole Miss.

The Ole Miss offense is led by Bo Wallace, their junior quarterback. Wallace is supported by a very impressive cast of skill positions players, starring Donte Moncief and Laquon Treadwell. Moncrief plays out wide, either at the X or Z position, and is coming off a 2012 campaign where he totaled 979 receiving yards. Treadwell, a true freshman (and top WR recruit in the country), typically lines up in the slot. In addition to those two, Ole Miss is very creative with how they use another true freshman, Evan Engram. Engram is listed as a tight end, but frequently lines up in the slot and at H-Back. He’s their leading receiver to date. Ja-Mes Logan also plays out wide, opposite Moncrief.

Their top running back is Jeff Scott, who is off to a fantastic start this year, running for 330 yards on only 35 attempts (9.4 yards per carry). Scott is very fast, and typically does his best work outside the tackles. Jaylen Walton serves as the primary backup. The Ole Miss offensive line is very experienced, and has added top offensive tackle recruit Laremy Tunsil to the mix. In short, they’re very impressive on offense and the Tide will have their hands full on Saturday.

When Ole Miss runs the ball they almost always do so with some sort of read option play, in order to take advantage of Bo Wallace’s mobility. Wallace is listed at 6’4" and 209 pounds, so as far as quarterbacks go he’s on the larger side. He does his best work in between the tackles, serving as a perfect compliment to Ole Miss’s quicker running backs. Because of this, of all the read option plays, the one Ole Miss runs most frequently is the inverted veer. As recently as five years ago almost no one had heard of the inverted veer, but that all changed with Gus Malzahn and Cam Newton in 2010. Malzahn needed a way to take advantage of Newton’s size, and he did so with option plays that allowed his quarterback to stay between the tackles, rather than using traditional option plays, which call for the quarterback to run outside the tackles.

When running the inverted veer the quarterback is reading a play-side defender, typically the play-side defensive end or play-side backer, who is intentionally left unblocked. The running back takes an outside angle, and once the ball is put into his chest the defensive end has a decision to take – crash inside to take the quarterback or stay outside to stop the running back. As is the beauty with both the veer and the inverted veer, no matter what the defender being read does, he is always wrong, so long as the quarterback makes the proper read at the mesh point (which Wallace is quite good at).

In order to illustrate this, lets take a look back at a couple of plays from Ole Miss’s game against Vanderbilt earlier this year. The first play is an inverted veer to the left. The play occurs at the 10:44 mark of the fourth quarter, and begins at 0:55:08 of the VIDEO. Here’s my sketch of the play: 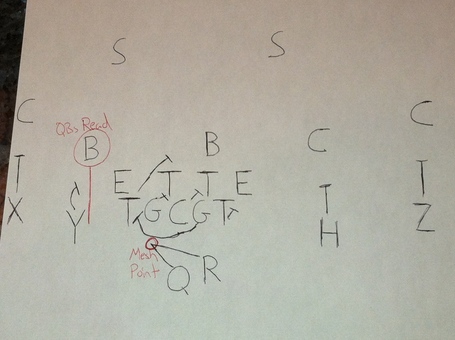 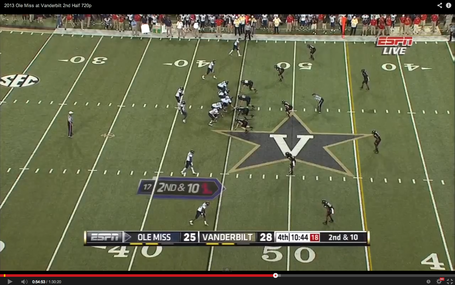 Wallace is reading the unblocked, play-side backer (#42), who I circled in the sketch. If he stays outside, Wallace will keep the ball and run up-field. If he crashes down to the inside Wallace will hand the ball off to Jeff Scott who will run to the outside before turning up-field.

The play-side offensive tackle jumps out to the second level to seal off the back-side backer.

The back-side offensive guard pulls around and blocks the play-side defensive end. 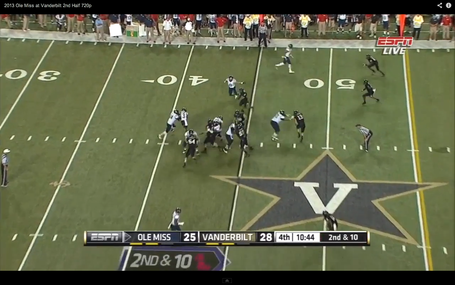 The backer stays to the outside, so Wallace makes the proper read, keeping the ball. There’s one other wrinkle here, which comes in the form of the Y. In case the backer had crashed inside and Wallace was forced to hand the ball off, the Y is waiting to seal off the edge should the backer reverse direction and head after the running back once the ball is handed off. 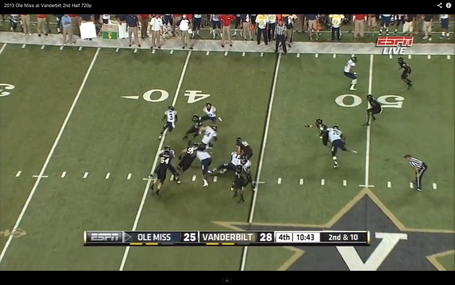 This play results in a big gain for Wallace.

At the 11:15 mark of the fourth quarter Ole Miss runs the exact same play, out of the exact same formation, against the exact same defensive formation. It begins at the 0:53:49 mark of the VIDEO. The same defender is being read, but the only difference is that this time he stays inside, so Wallace gives the ball off to Scott. By the time the backer realizes this and tries to beat the running back to the edge it’s too late. The Y has sealed the edge and the backer runs right into him. 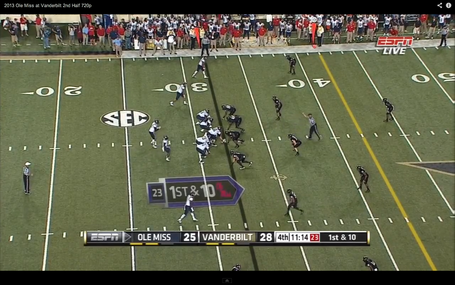 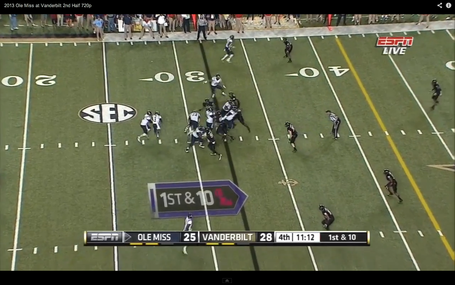 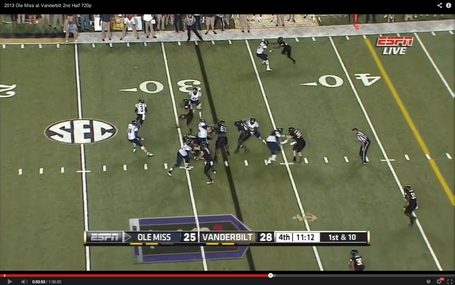 The inverted veer is Ole Miss’s favorite offensive play. They could run this up to twenty-five times a game, with the only differences being cosmetic, while all the fundamental concepts remain the same. 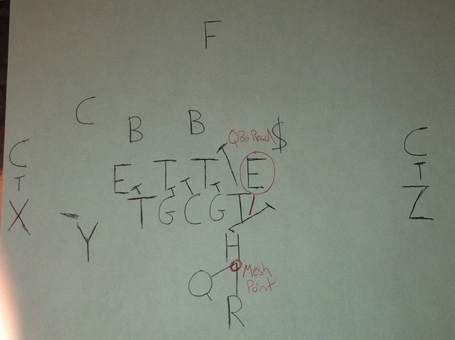 Ole Miss has three wide receivers on the field, two to the left and one to the right. They have an H-Back lined up behind the play-side tackle and the running back is lined up to the quarterback’s right, and slightly behind him. Once against Vanderbilt is in their 4-2-5 nickel formation. The strong safety moves down into the box and, curiously, both backers are shifted toward the weak-side. 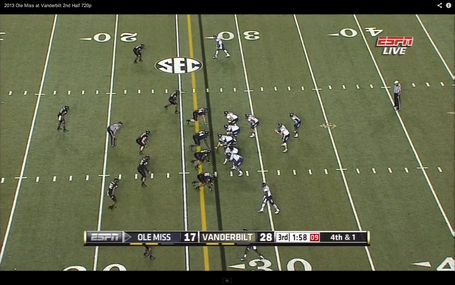 Wallace is reading the unblocked, play-side defensive end, who I circled in the sketch. If he stays to the outside Wallace will hand it off to the running back. If he crashes inside, Wallace will keep the ball and run off tackle. The key block here is made by the H-Back, whose responsibility is the strong safety. 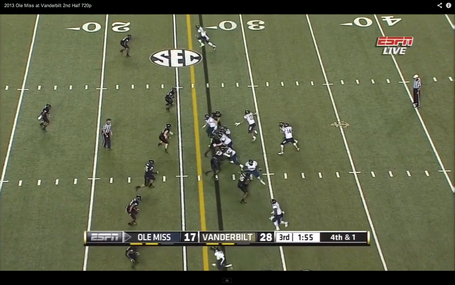 The defensive end crashes inside and once again Wallace makes the proper read, keeping the ball and running for the first down. 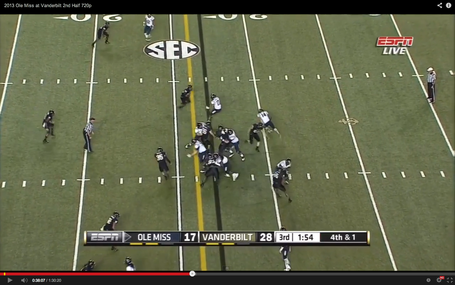 The primary difference between the zone read and other option plays is that the defender being read is on the back-side. If that defender crashes inside, the quarterback keeps the ball and runs toward the area that the defender vacated. If the defender stays outside, the quarterback hands the ball off to the running back and a traditional zone run follows. Finally, Ole Miss runs the zone read at the 9:10 mark of the fourth quarter and at 0:57:28 of the VIDEO. Here’s my sketch of the play: 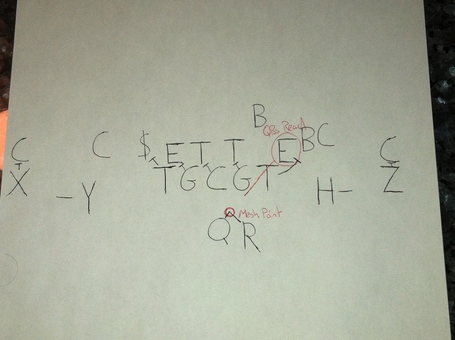 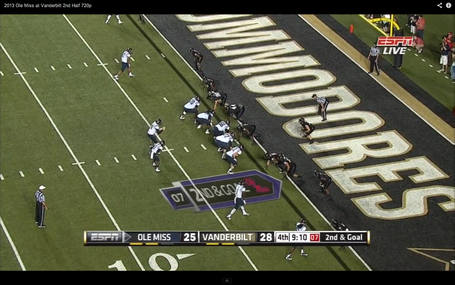 Wallace is reading the unblocked, back-side defensive end. If the end crashes in Wallace keeps the ball and if the end stays outside Wallace gives the ball to Scott. The entire offensive line zone blocks to the play-side while the back-side tackle kicks out and blocks the back-side backer, sealing him off to the outside and opening up a potential running lane for Wallace. 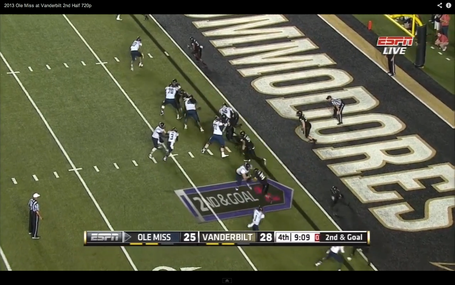 The defensive end crashes inside to take away the running back and Wallace walks into the end zone, untouched. 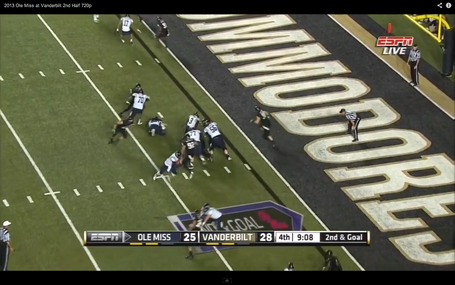 Ole Miss’s option rushing attack is very good. In particular the veer and inverted veer are difficult to defend, because no matter what the read defender does he’s wrong, so long as the quarterback makes the correct decision. Alabama will counter this with force calls and by scraping defenders, which will hopefully be enough to mitigate the effectiveness of these plays. At least, we shouldn’t expect much triple option from Ole Miss. That isn’t really in their repertoire.

When Ole Miss throws the ball they’re quite similar to another HUNH team, the Oregon Ducks. That means lots of short passes (slants, hitches, drags, etc), wide receiver screens, and vertical concepts stressing the middle of the field.

Their screen game is the best way to get Treadwell and Moncrief, two guys with very good skills after the catch, the ball in space. They’ll do this with bubble screens to the slot receiver (Treadwell) and slip screens to the wide receiver (Moncrief). For a good look at both Ole Miss’s screen game and Treadwell’s talent, check out their second drive of the second half against Vanderbilt, which begins at 12:15 of the VIDEO.

Alabama will likely come out in press coverage, looking to take away these easy throws, but there’s a danger in that. If Ole Miss feels like the defense is cheating for the screens they’ll fake it, and either the slot receiver or wide receiver will run a wheel route, giving the offense an opportunity for a big play.

Four verticals is also a staple of the Ole Miss offense, specifically when the opposing defense is bringing extra men into the box. They run this play at the 8:43 mark of the second quarter, and it begins at 0:53:59 of the VIDEO. Here’s my sketch of the play: 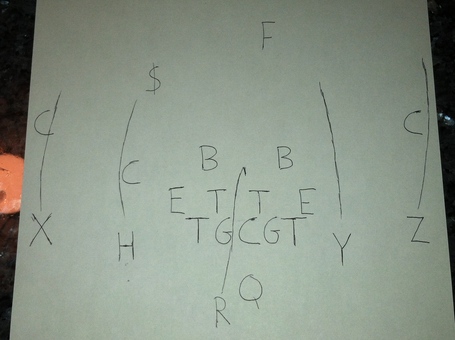 Ole Miss has four wide receivers, in a 2X2 formation. The running back is lined up to the left of the quarterback, and slightly behind him. Vanderbilt is in their 4-2-5 nickel formation. 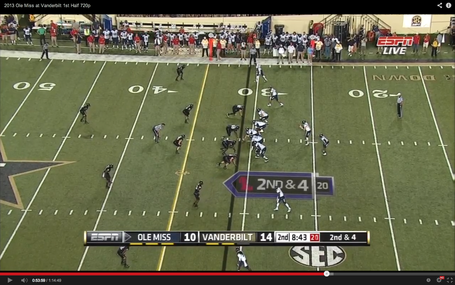 The key to throwing the ball down the seams on four verticals is to drop the ball between the zoning linebackers and the deep safeties. The second Engram clears the linebacker Wallace throws the ball his way. 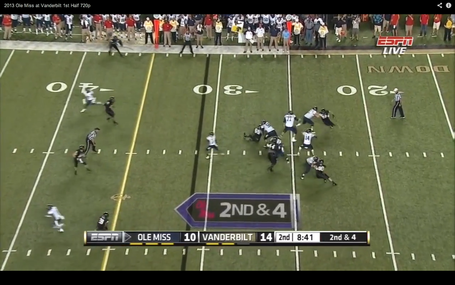 The throw is perfect and the result is a big gain.

We’ve heard a lot lately about Alabama’s pattern matching zone, and this is one of the biggest areas where it comes into play. It was invented specifically to stop this type of play, because rather than allowing the receiver to pass by, the linebacker is supposed to turn and run with him. Unfortunately, if they bite up to stop the run, that type of coverage breaks down immediately. Staying disciplined against play action will be a huge key for the Alabama defense on Saturday.

As I’m sure you’ve come to realize, Ole Miss’s personnel pretty much remains the same throughout the game, no matter where they are on the field. Vanderbilt chose to counter this with their nickel packages, hoping to stop the run first. Ole Miss countered by throwing the ball 47 times. My guess is that Alabama will play more dime, making Landon Collins the key, as they’ll rely on him to be sound against the pass and act as an extra linebacker against the run.

The other big question is how will they defend Treadwell. Even if Deion Belue plays, I wouldn’t expect him to shadow Treadwell, because he’ll have his hands full with Moncrief on the outside. Geno Smith, if he has worked his way back into the starting lineup, is their best slot corner but his lack of size may prove inadequate against Treadwell. Jarrick Williams has better size than Smith, but he doesn’t have his talent, and I could easily see Treadwell abusing him in man coverage. It will be interesting to see what Coach Saban has planned for this match-up in particular, and for the Ole Miss defense as a whole.