The Goalpost Goddess: Can They Do It?

For the first time in a while I find myself not attending an important SEC match-up and it has me a bit nervous.

Share All sharing options for: The Goalpost Goddess: Can They Do It?

My daughter has become quite the Irish dancer and she's performing a Simple Jig and a Two Handed Reel at her school Feis on Saturday.  The last time I missed a game for one of her events was in November of 2007 (I won't even mention which game it was) and the last time I missed an SEC game was an early November 2011 game.  I'm not putting anything out there into the universe or anything, but I'm just saying, those two facts alone have me a bit more nervous than they should.

After being inspired by 5026's post about attending as many games as you can and enjoying at least one game at BDS in your lifetime as a Bama fan, I felt that I had to do what I could for those who had never been.  That's why my tickets went to a fan who had never been to a game at BDS and why I also expect that he will represent fanaticism well without me there.  So, he gets to enjoy a game at one of the most amazing locations in the US to do so and I get to trust that our team is in good hands with him taking my place in those seats (hoping for the best).

Last year Ole Miss gave us a bit of a scare and until Judge started watching the game just after halftime I was concerned that they may have had us, thankfully he didn't let his obligations (I promised no rubbing it in) get in the way of his game watching and was able to cheer us back from the brink in the second half.

I think I'm channeling old friend outsidethesidelines here this week in my pessimism but I won't voice it as he always did and now OldWhistleBritches now does.  Stats lie, hell, I'm a statistician I can turn numbers into anything I want them to say on any given day.  What I know is that this game will have to be played for sixty hard minutes on Saturday and thankfully we're playing at home in front of a crowd that is ready to be loud.  Even the upper bowl of the student section was full and loud last Saturday for Colorado State so I expect it will be even louder for our first home SEC matchup of the season.

A lot of discussion was had about why our home season started so late this year and apparently we had a team cancel off our schedule and that is why we ended up with CSU at home after an early bye week.  No one has really leaked who that team was that backed out on us but I wish someone would say, it would make for some interesting internet and bulletin board fodder.  Plus, who doesn't love to hate a team that makes your first home game mid September? It was hard to get excited about last week's game but I'm glad that I was there. I got to experience AlabamaJammer's first trip to BDS and the look on his face when we entered the stadium on the field level was priceless.  If you EVER get to take someone there for the first time and you've experienced it many times before, for your heart's sake, do it. It will remind you what you may take for granted every weekend in the fall.  Just as I had forgotten what it was like to go to a game as a child until I took my daughter a few years ago, I had forgotten the magic of it all until I saw the chills rise up on his arm as the videos began and the band struck up "Yea, Alabama."

So, to everyone that is going to the game on Saturday - enjoy it, yell extra loud for me, savor the atmosphere & get up when Coach Cochran tells you to.  To those of you that will be enjoying it at home like I will be, try not to throw things at the TV because you're going to need that remote again next week & the TV for the rest of the season.

1. The RollBamaRoll Welcome Center (in case you missed it.)

2. My email for any questions you may have that you don't want to leave in comments:RollTideYall74@gmail.com

3. One of the most delicious men on television right now, the RBR Beau: 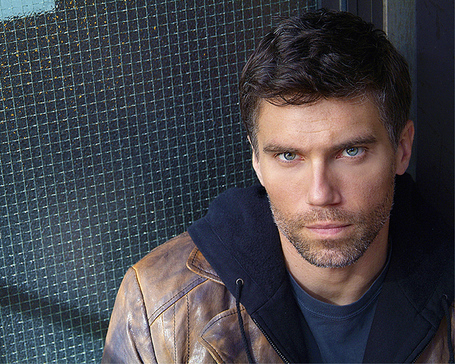 I think those eyes should cause a 15yrd penalty via maltintel.com

Oh, and a reminder to go and visit the Bryant Museum while you're in Tuscaloosa, they're celebrating Coach Bryant's Centennial year with an Ultimate Fan Giveaway & if you sign up you get a free ticket to the museum.  Details Here

As always, enjoy the game and