Taking our final, and most detailed look at the Oklahoma offense prior to Thursday's Sugar Bowl.

Share All sharing options for: Preview: The Oklahoma Offense

In two previous posts we took a look at Oklahoma's team statistics and their quarterback situation, so lets jump right into skill position players, offensive line, and scheme.

As we've discussed previously, Oklahoma is a run first offense.  Their top rusher is Brennan Clay, who is in the midst of a fantastic senior campaign.  In 12 games Clay has rushed for 913 yards on 158 carries (5.8 YPC), to go along with 6 touchdowns.  His highlight of the season was a 200 yard effort against Kansas State at the end of November.  Clay is on the smaller side, at 5'11" and 201 pounds.  He can beat teams between the tackles and on the edge, and is the key cog within this offense.  For much of the season the backup was Damien Williams, but he was dismissed from the team following the Kansas State game, and so Oklahoma will be without his services when they take the field on Thursday night.  The leading candidate to step up in place of Williams may be senior Roy Finch, who has rushed for 347 yards on 59 carries this year (5.9 YPC).  And as we talked about in the quarterback preview post, Bell and Knight are running threats -- which we'll touch on more, later.

Oklahoma's leading wide receiver is senior Jalen Saunders.  After tallying 1065 yards as a sophomore and 829 yards as a junior -- both years with Landry Jones throwing him the football -- Saunders has had a bit of a down year, likely because both Bell and Knight aren't as adept as Jones at getting him the football.  His receptions are right on par with his career norm, at 56 (he had 50 in 2011 and 62 in 2012), but his receiving yards are down to 654.  This is probably due to the inability of both quarterbacks to stretch the field on a consistent basis, something that Landry Jones did quite well.  But Saunders, who is only 5'9" and 157 pounds, is still dangerous in the passing game, especially on short and intermediate routes, and Alabama must account for him on every play.  Oklahoma's number two receiver this year is Sterling Shepard, who has hauled in 44 receptions for 540 yards.  He also caught 6 touchdown passes.  Lacoltan Bester and Jaz Reynolds are also players to watch in the passing game.

Oklahoma lost starting tackle Tyrus Thompson and starting guard Adam Shead toward the end of the season, but it seemed to have very little effect, as the line has performed quite well in their absence.  It's a bit unclear, at this point, who will be starting along the offensive line on Thursday, but the favorites seem to be Derek Farniok and Nika Kasitati.  The unit is led by Gabe Ikard, arguably the top center in the Big 12.  Right tackle Daryl Williams is also impressive.  We can expect this unit to really challenge Alabama at the point of attack.

By nature Bob Stoops likes to throw the ball, a lot, which has led to Oklahoma having among the most prolific passing offenses year in and year out.  But without a talented passer at the quarterback position this year, Stoops has been forced to adapt, and to his credit Oklahoma boasts one of the most productive running attacks in the country.  At the heart of their running attack is the zone read -- a play that allows them to take advantage of their quarterback's ability to run the football, and not neglect Brennan Clay.

They'll run option plays with both quarterbacks, although they'll do it more with Knight in the game -- which is one of the reasons I suspect Knight will get significant playing time on Thursday, given Auburn's success with option plays against Alabama.  They'll sprinkle in some veer and inverted veer, but more often than not it'll be a basic zone read.  We've discussed the zone read before, but here's a brief refresher -- the quarterback will enter into the mesh point with the running back and read an unblocked, backside defender.  If that defender stays outside, the quarterback will simply give the ball to the running back and it'll be a zone run to the play-side.  On the other hand, if that defender crashes inside to take the running back, the quarterback will pull the ball out of the mesh point and run toward the area vacated by the unblocked defender.

Here's one example of Oklahoma running the zone read.

Oklahoma is in 20 personnel (2 backs, 0 tight-ends, and 3 wide receivers).  Oklahoma State counters with their base nickel package. 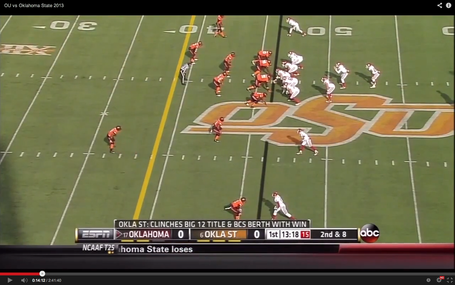 There are a couple things about this particular zone read play that make it unique.  First, instead of the quarterback reading the end man on the line of scrimmage he reads the backside linebacker, who flows toward the edge once the play begins to develop.  The defender crashes inside, so Knight pulls the ball out of the mesh point and runs toward the edge. 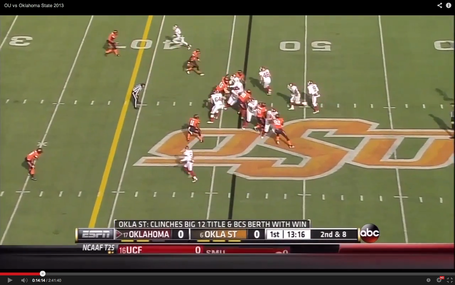 The second unique element to this play is the use of an arc block, in this case being made by the fullback.  The zone read has been around for awhile, but arc blocks are relatively new.  Alabama saw some of this against Auburn, including on Nick Marshall's big run right before halftime.  It's a great way to counter scraping defenders and corner blitzes.  When executing an arc block the fullback's job is relatively simple.  He 'arcs' around to the backside and blocks the first bad color shirt he sees.  If the quarterback ends up running with the ball it's often the arc block that frees him up for a huge gain.  That's what happened on the Auburn play I mentioned above, and, in case anyone remembers, it's what happened on Colin Kaepernick's long second half touchdown run during last year's playoff game against the Green Bay Packers. 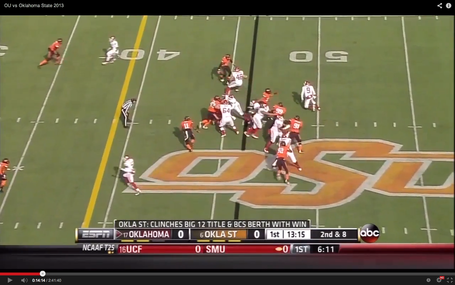 In addition to the zone read, Oklahoma will use the triple option every now and then.  Alabama has only faced a triple option one other time this season, and that was against Virginia Tech.  The Hokies, on the whole, had very little success with this against the Tide, with one exception -- Trey Edmund's long touchdown run.

Here's an example of Oklahoma running the triple option.

Oklahoma is in 11 personnel, with all three wide receivers lined up to the left side of the formation.  Oklahoma State, once again, is in their nickel formation.  Slot receiver Sterling Shepard comes in motion from left to right, just before the snap. 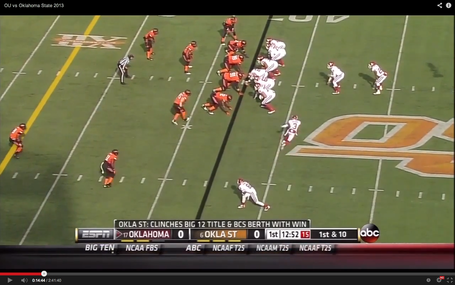 But instead of waiting for him to cross the formation, the snap comes even before he reaches the quarterback.  He changes direction, and he's now the third man in the triple option. 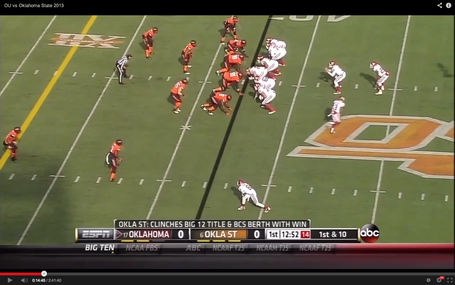 This time the quarterback is reading the end man on the line of scrimmage.  He crashes inside, so Knight pulls the ball out of the mesh point and runs toward the edge.  Shepard stays behind Knight and to his left, as the pitch man. 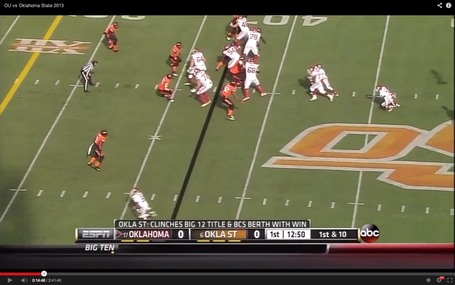 Now the man being read is the slot corner.  Knight plays this perfectly, attacking his inside shoulder and forcing him to either play the ball or the pitch man.  The defender stays outside, so Knight keeps the ball and turns upfield, picking up a nice chunk of yardage. 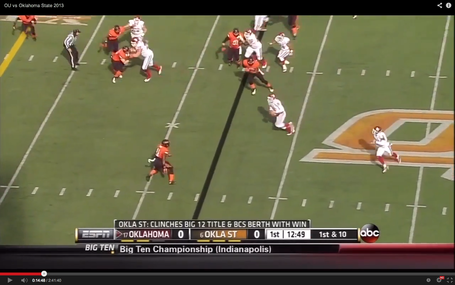 When Blake Bell is in at quarterback, Oklahoma will still use the zone read, but they'll supplement it with some basic quarterback power plays.  They'll especially use this in short yardage situations, just as they did when he was the backup to Landry Jones.  Additionally, they'll use basic inside zone and outside zone running plays.  Their run game is the key, which is nothing new to Alabama.  In fact, out of all their opponents this year, Texas A&M and LSU were the only offenses equipped to challenge the back end of the Alabama defense.  Furthermore, they're also no stranger to option plays.  The only difference is that Oklahoma, unlike most of the teams Alabama has faced this year, aside from Auburn, makes use of arc blocking.

But their running game isn't on par with Auburn's, and they will need to make plays in the passing game to beat Alabama.  They have enough talent at wide receiver between Saunders and Shepard, but, unfortunately, for them, they simply don't have a talented enough passer to make plays downfield consistently.  Look for them to keep the reads very simple for whichever quarterback plays, meaning lots of quick throws, screens, and play action passes on early downs.  But if the Alabama defense can take away the first read, and make Knight or Bell go through their progression, mistakes will happen.  I know this all sounds familiar, and it should.  I'm not one to make predictions, but assuming Alabama takes the field focused and motivated, I would be very surprised if Oklahoma cracked 20 points.