How Do I Hockey: The Playing Surface

Share All sharing options for: How Do I Hockey: The Playing Surface

Last time, we touched briefly on the objectives of hockey. Today, we'll look at the playing surface, which also necessitates a brief discussion of three rules: Icing, Offsides, Goal Interference.

First, take a moment to familiarize yourself with the diagram below. Got it? Good. 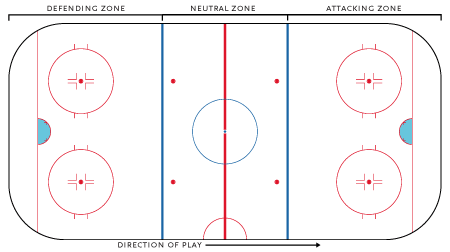 The rink (or "ice") is divided ice into three zones. The first is the neutral zone. Last time, we said that this is the territorial divider between the teams, and is where the puck is dropped in a scrum known as a "face off" to resume play after periods or scoring or certain other stoppages. This area of the ice is also where players attempt to organize their offense, where the teams' benches are located, where penalty boxes are located and where defenders often attempt to disrupt an attacking opponent.

On either side of the red line are the "blue lines." Blue lines are the beginning point of a team's goal, which must be defended (or, conversely, where opponents attempt to score on the other team). Like soccer, players must have possession of the puck before crossing into an opponent's zone. If a player is "offsides," play stops, and a face off occurs outside of the blue line (or, if a player is already in the opponent's zone, and the puck has not crossed the blue line, they may cross back out of the opponent's zone -get onsides- with no stoppage of play.

This youth hockey video does an exceptional job illustrating the blue line and the very common offsides infraction.

Go back to our diagram, and now look at the smaller, thin red line near the boundary of the ice. This is the "goal line," the area where the goalie keeps shop. The center of this goal line (marked in blue) is the "crease." The crease is where the goalie perches in front of the net and attempts to stop the puck. Opposing players may not just set up camp here to harass the goalie, take a whack at him or score cheap goals. They must generally stay outside this area; failure to do so results in a penalty known as "interference."

Of course, with a no-touch area like this, an entire cottage industry of tactics and guys have sprung forth -plays and players designed to screen the goaltender's visibility and increase scoring chances. In the below video, one such person, the massive pain in the ass Alex Burroughs, executes this perfectly: showing you the crease, staying out of it to avoid interference penalties, and still screwing with opposing goalies to create scores:

The flip side is when the no-go zone is violated, and it is taken pretty seriously by players. In fact, touching the goalie period is interference...Crowding the goalie, whacking him, interfering with him, or otherwise invading the crease will earn you a stick to the body (often by the goalie) or a swift jab. Below, you see an interference penalty, a scrappy goaltender, and swift reprisal for going after your net-minder.

Now, refer back to the diagram. See those two bullseyes right outside of the crease, one to the left and one to the right? These are the face off circles. When there are routing stoppages in play (such as a goalie covering the puck, the puck unintentionally getting lodged under guys, or the puck is otherwise unable to be advanced), then the zone where the puck stopped progress is where a new face off would occur -you need not go to center ice to face off. Areas below this are "down low;" areas above it -and towards the blue line, are "the point" or "high." The areas in the middle, between the face off circles, are known as the "slot" or "between the circles." If you extend an imaginary line from one face off circle to an opponent's face off circle, this space on the ice is known as "the lane." Tomorrow, we will discuss these real and imaginary ice features as they pertain to player positions and positioning for game play. 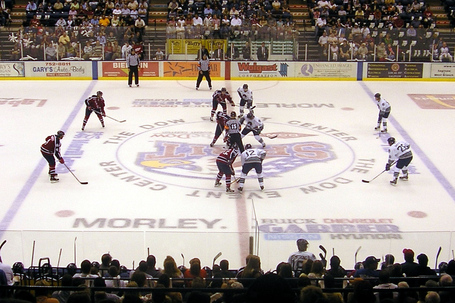 A final note on the red line, the goal lines, and the defending zone: The red line also is crucial for an infraction known as "icing." If a player shoots the puck from their side of the red line into the opponent's zone where it crosses the goal line, and the defending team is the first to touch the puck, then play stops -there is no way to rehabilitate icing, as with off sides- and the teams face off all the way back in the offending team's zone.

Icing therefore often "flips the field position," as it were, and can put exceptional pressure on the offending team. Of course, there are strategic reasons for icing the puck, and there are also circumstances where there is no icing (such as the attacking team touching the puck first, or the attacking team being down one or more players during a penalty). The below video explains icing pretty well, and differentiates between traditional icing and the "no touch" variant, which is in use by college squads, many semi-pro leagues, and in international play. Then, there is "hybrid icing," now an NHL rule, and we won't even discuss that.

But, why all the variants of what should be a simple play, determined by player position on the ice? The main reason is that when players are skating pall mall to chase a puck to prevent icing (or to cause an opponent's icing infraction), people get hurt. Badly. Often.

I know this is long, but we hope you enjoy it. Below are the remaining three parts, their publication dates as we run up to the Iron Cup -Erik