How Do I Hockey? Players, Scoring and Penalties

Part Three of Five: We conclude basic play, before moving on the Iron Cup and Alabama Hockey Q&A

Share All sharing options for: How Do I Hockey? Players, Scoring and Penalties

In this installment, we'll look briefly at what the players' responsibilities are, how goals are scored, and a few of the penalties generally affecting play.

The Charlotte Checkers probably set forth these as concisely as I've seen.

Here is a quick diagram of how the players are positioned during center ice face offs (such as would occur after scores, to start the game, to start periods, etc).

Immediately after a team gains possession of the puck, the players then attempt to move through the neutral zone and into an opponent's zone. See below, which shows the location of each player in their own zone, or while attacking an opponent's zone. Note our discussion yesterday of "lanes," if you draw two imaginary vertically along the length of the ice, you can see where the wingers would proceed up and down the ice in their "lane" and the center would generally captain middle of the ice.

Unlike football or baseball which may have set plays, hockey tends to be a fluid sport, with players generally trying to be in position to make a play, or use offensive sets which exploit an opponent out of position. It is very helpful for a casual or new viewer to think of basketball here -where a point guard may call a set, and then the players execute to see if they can create space for a score.

There are other ways to "set plays," of course; the most immediately recognizable being 1. "cycling" the puck -where players maintain possession of the puck, and then pass it around the net area in a circular fashion (think of the NBA's high-low game) 2. the "rush" -where players criss-cross the ice, advancing quickly through the neutral zone and using with sharp, precise passes to create a numerical advantage, or open shooting lanes for a clean shot on goal (and we have previously discussed creating screens in front of the net, as well as one-on-ones versus a shooter -either via overtime, penalty shot, or "breakaway".)

Here is what cycling the puck looks like, and why it it is important in creating scores.

Here is the iconic Detroit Red Wings' Red Army Unit, and within the first 1:00 of the embed you see 1. the rush, 2. the one-on-one breakaway, and 3. cycling the puck to create a shooting lane.

These principles of scoring are slightly different when an opposing team loses a man (or more) for a set period of time because of committing a penalty. This period of time (usually 2:00 or 5:00) is known as a "power play." Power plays tend to be more deliberate than the above, with much more passing as the ice is a bit more open absent an opponent. This is also when the team with the "man advantage" sets up a defender in front of the crease to screen the goalie from incoming shots, to tip the puck in on long passes/shots, or to simply force it in if the goaltender is unable to completely control the puck being shot at him (--the latter are known as "garbage goals," or "rebound goals," and a smart move is to just shoot the puck at the goaltender and hope for the best). See below for an example of the defense being set to disrupt the power play passes, but rebounds from the goaltender result in a score for the attacking team (think of this as a scoop-and-score, if it helps you analytically -capitalizing on the ball being mishandled.)

That being said, what are some of the reasons a team can find themselves down a player (where they leave the playing surface and go the the "penalty box"?). The main infractions are below, but they are generally divided into minor, major, misconduct and game misconduct penalties, and the amount of time the offending team is penalized varies accordingly (2:00, 5:00, 10:00, ejection, etc). The number of penalties, infractions etc are large (you probably should review this page). In the meanwhile take a look at the ones most frequently assessed (and, yes, I am unafraid to use the "Dummies" version).

All that said, I think you have the general nuts and bolts now: playing surface, penalties, positions, scoring. The tactics and strategy (particularly with swapping players and strategic substitutions known as "line shifts") are infinite. While we do not have the space for those discussions, I did stumble across an amazing teaching image below. While meant as a coaching tool, it will also help the casual or new fan understand the further role of each player, and how all the seeming chaos on the ice is actually just beautifully orchestrated violence. 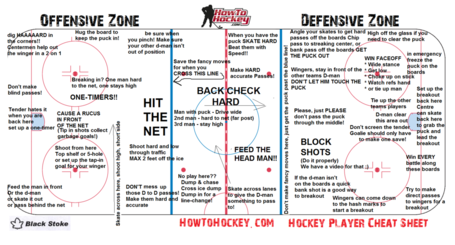 Thanks for reading, and, as a program reminder: Question and Answer with Alabama Hockey on Thursday; Friday, Iron Cup preview.