Share All sharing options for: Better Know Your Bama Recruits: The Defense

As we continue the slow march towards national signing day (February 5th), it's time for another look at the recruits that have committed to sign with the Crimson Tide in three weeks.

Remember that all verbal commitments are non-binding, and these players are free to change their mind at any time up until and including signing day.

Ronnie played a number of positions in high school, including linebacker and wide receiver, but he projects as a safety at the next level. Watching his tape, Clark isn't going to blow you away with his speed. He's a bit of a lumbering runner, taking big strides and often picking his way through traffic, rather than bursting through a seam. His tackling form is decent, but there are a number of times where he seem to set his feet early, and ends up reaching to make the tackle. All of those minor critiques aside, Clark does have the build to be a physical presence in the defensive backfield, and could very well be the answer for the strong safety position in '15. Here's his YouTube highlight film.

A couple of things jump out when you watch Dwight: he is big and he is strong. Johnny does a good job of attacking blockers, and doesn't give up ground, even to double teams. Projecting for the next level, he looks like he will be a dynamite run stuffer. He doesn't seem to have great moves or speed for getting penetration, so I don't expect him to make a large impact in the passing game, but he has the potential to be a brick wall on the line. Here is his YouTube tape. 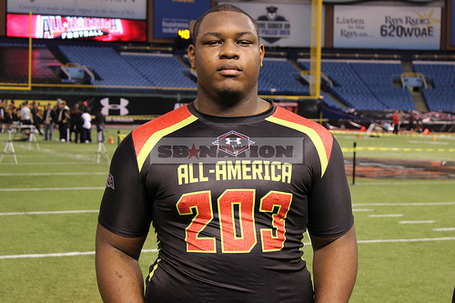 Just like Johnny Dwight, Josh Frazier is big and strong. Unlike Dwight, Frazier seems to get decent penetration, especially considering he's getting this production from the defensive tackle position. Whether bull rushing one on one blocks, using his power to split a double team or swim-moving his way into the backfield, Frazier demonstrates a combination of power and speed that doesn't come around everyday. Already at 330+ pounds, Frazier should be the nose guard of the future. Here is his highlight reel. 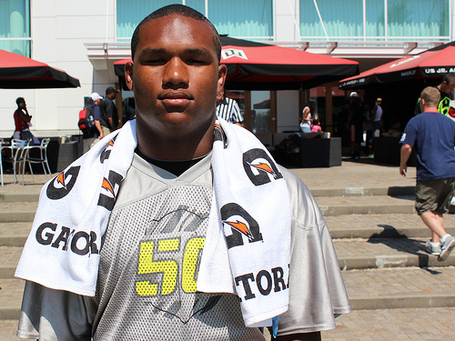 The last time we saw Da'Shawn Hand, he was breaking Michigan's heart. They were right to be upset, though, as Hand is a bona fide, can't miss, this kid will rule the world-type star. Hand looks like a video game create-a-player in his highlight tape. I apologize for the effusive praise, but it's hard not to get excited about this kid. The combination of raw physical abilities and smarts that he possesses is truly rare.

Da'Shawn may legitimately be the best pass rusher Nick Saban has ever recruited to Bama, and if you had to pick one player in this class that will have the biggest impact his freshman year, he would be my pick. Here are a couple highlight tapes - a general one, and one with a lower quality that shows Hand making some devastating hits.

Keith Holcombe is a somewhat lightly regarded recruit (as evidenced by his Rivals non-ranking). Watching his tape, it's partially understandable. Keith has good, but not amazing, speed, and he's awfully thin. Projecting him a couple years down the road with some weight on him, though, there's definitely some promise here. The one thing that stands out is that Keith plays with good technique. He handles blocks well, strings out wide runs, does a decent job in pass coverage, and makes good form tackles. This will be a guy to keep an eye on in '16/'17. Here is his highlight tape.

Almost universally regarded as the best outside linebacker in this class, Christian Miller has a bit of a pedigree. His dad played for the Gamecocks in the early '90s, then had a nine-year career in the NFL. Honestly, when I watch his tape, the thing that impresses me most about Miller is his motor. His speed/tackling/play-making skills are all good, but this kid plays with so much energy it will make you tired just watching him. Here is his highlight tape.

Given his dimensions, the first description of Smith that comes to mind is "space eater", and while that certainly isn't inaccurate, neither is it sufficient. Smith does a good job of controlling his blocker, pushing him into traffic on run plays, or beating him outright to rush the passer on pass plays. While a guy this big is never going to have great speed, Smith does show a nice burst at the line, and there were times in his tape that he caught a guy much smaller than him in pursuit. Considering the depth we will have on the defensive line next year, it may be too much to expect him to get playing time in his freshman campaign, but he should be a valuable addition to the rotation after a redshirt year. Here is his highlight tape. 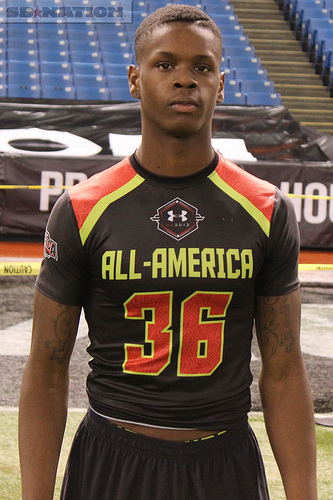 This is an interesting one for me. The only highlight tape I could find for Williams had him labeled as a safety, but then went on to show him pretty much exclusively on offense/special teams. There was only one play on the reel that showed Williams playing defense (at the 2:50 mark), and it's nothing spectacular. He comes unblocked against a quarterback and basically just holds on for dear life.

Here's what I know from the tape: the kid has speed and he is really good in space. I wouldn't be surprised if he's our punt returner/kick returner of the future. But as a safety? I would imagine he's a bit away from that. At only 180 pounds, he needs to gain at least 20 pounds before he's a legitimate option there. It's possible he was recruited with an eye at putting him at cornerback, but without any tape to evaluate his hips/coverage skills, I'm not really in a position to comment on the viability of that option. Here is his highlight tape.

And that will do it for this week. Be sure to check in next week, as we wrap up the profiles of Bama's current commitments.