What the Sugar Bowl Means to Alabama

Share All sharing options for: What the Sugar Bowl Means to Alabama

Perhaps I have misread the pulse of the Crimson Tide faithful but it seems as if the general feeling over Alabama playing in the Sugar Bowl is slightly less than ecstatic. About 35 days ago we all had our sights on the national title game, now we find ourselves just mere hours from the final game of the season yet the mood is somber.

As I told the boys over at Crimson and Cream Machine, we all felt that 2013 was national championship or bust and I didn't think a twelve win season and Sugar Bowl appearance would be enough to heal those wounds. Alabama is a program whose success is marked by championships, not 10 win seasons and bowl appearances (though we own those records as well). Oddly enough, Sooner fans feel the same way about the game. A 10 win season is a great accomplishment but when your aim is a national title and you miss, feelings of disappointment are hard to suppress.

But what does this game mean for Alabama?

Tonight marks Alabama's fifth BCS appearance in six years, three of which were national title games. To date, 'Bama is 3-1 in BCS bowl games under Nick Saban and 3-2 all-time.

The Sugar Bowl is also a home away from home for Alabama, where the Crimson Tide have won three national titles.

The Sugar Bowl is where this happened 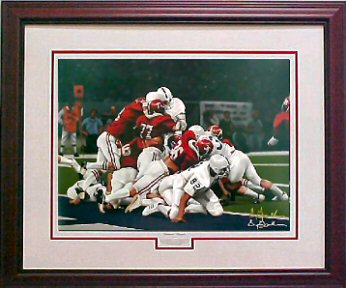 It is where I hold my earliest memories of Alabama football..

No, this isn't the national title game and in a way that feels weird. I have found it hard to watch bowl games the past week or even get excited about the idea of playing Oklahoma. But it's time to stop sulking. We have a game to play and our boys deserve our love and support.

So, to that I say Roll Tide and Beat Oklahoma!