Share All sharing options for: Better Know Your Bama Recruits: The Offense

National Signing Day is now less than two weeks away.

We have already covered two installments in our Better Know Your Bama Recruits series: the early enrollees, and the defense. This week, we'll be looking at the offensive recruits, and next week we'll wrap up the profile coverage with a review of the big names that are still floating out there before national signing day.

Remember that all verbal commitments are non-binding, and these players are free to change their mind at any time up until and including signing day.

NOTE: Rivals position rank database seems to have crashed. The first two players' rankings are correct, but the rankings were not available for the others at the time that I published this article. If Rivals gets their rankings up shortly, I will update accordingly.

Though he is classified as a center by all of the recruiting services, his high school highlight tape shows Casher playing pretty much everything but. By playing left guard, right guard, and right tackle, Casher demonstrates a flexible utility that can often come in handy (perhaps for Casher's sake, this is more the case than usual, given the depth of the OL in Bama's signing class this year (more on that later)). At only 6'1", Casher will certainly be an interior lineman, and his highlight tape may leave you reminiscing about another interior lineman that had a penchant for baring his belly. This kid is a strong, road-grader type blocker, and more often than not, it seemed his target ended up on the ground. Check out his highlight tape for yourself, and let me know what you think. 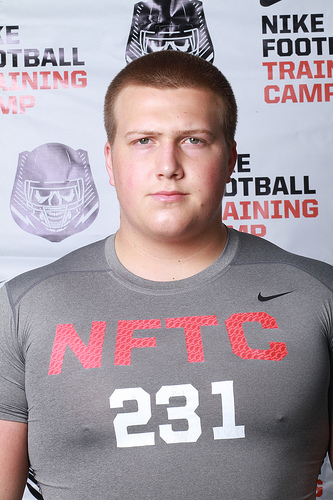 So about that offensive line depth... somehow, Saban has managed to land the top two centers in the same class. Some things just shouldn't be possible, and this feat is on that list. Unlike Casher, Hassenauer's highlight tape does show him playing center. I'm not sure that there's much to say about this kid, other than his ranking seems to be well deserved. He gets into his stance quickly, and then stones rushers on pass plays, or drives his man on run plays. Here is his highlight tape. Be sure to check out the :50 second mark, when he drives his man 10 yards down field. We're early into this list yet, but Casher and Hassenauer alone have to make you feel pretty good about the future of the interior of the offensive line.

Jackson is a bit of an interesting case. As a JUCO player, Jackson had the option to sign weeks ago, and didn't. The rumors were that there were it was some potential academic snags that were a sticking point. Saban had an in-home visit with Jackson yesterday, and all reports seem to indicate that Saban was bearing good news on the academic front. If eligible, Jackson should immediately provide a viable option at the left tackle position. Here is his highlight tape.

Mr. Media. To my knowledge, Kief is the only commit in this class with his own website (creatively named www.derekkief.com). If self promotion is the kind of thing that puts you off, be sure to note that the site was created and is maintained by his uncle, who is understandably proud. Kief isn't going to blow you away with his speed, but at 6'4", he does provide a big target. He has also great hands, and does a nice job of high pointing the ball and catching away from his body. Check out one of his highlight tapes here. 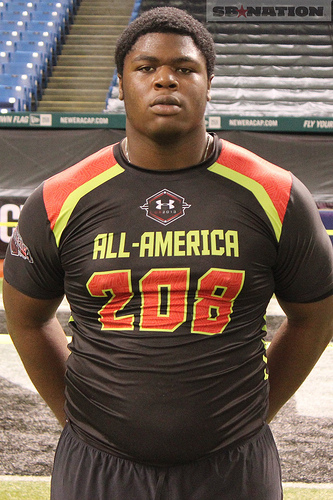 Here we have yet another strong interior lineman. McBride is a big kid that plays strong and looks like he'll be a run-blocking terror. One negative on him is he seems to rely a ton on power and plays with heavy feet when pass blocking, which could be a problem against quicker defensive tackles. Here's his highlight tape.

Another prospect, another big time offensive lineman. Noticing a trend yet? Ross (I'm not typing that last name multiple times) does a nice job in both run blocking and pass protection, but he seems to have a tendency to end up on the ground. I can't tell if this is a balance issue where he has trouble keeping his feet, or if he's just basically tackling his guy half the time, but either way, he'd be better served staying upright more often. Overall, Ross looks like a solid tackle prospect, and he should be right in the mix when the right tackle spot opens up in 2015. Here is his highlight tape. 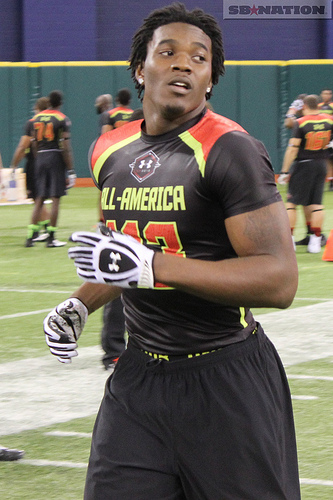 Bo is a big get. He's an extremely athletic guy, that many consider to be capable of playing either running back or wide receiver at the collegiate level. While his speed and route running skills are both very good, from some footage that I've seen, his hands are just adequate. Watching him play running back, though is something else altogether. Scarbrough runs with speed, power, fluidity, and an elusiveness that belies his size. It will be interesting to see what role Bo can play this year, as Bama has a bit of a logjam at running back presently. In some ways, a redshirt year may make sense due to the depth chart, but at the same time, it will be hard to keep a guy like this on the sidelines. Get a drool napkin, and check out his highlight tape.

Though his classified as a kicker for his recruiting rankings, Scott is likely the answer to the age old question "Who will replace Cody Mandell?" I wouldn't be surprised if he gets a look at kicker, though, as he seems to have a heck of a leg. His highlight film includes him coming just short of making a field goal from his own 40 yard line (that's 70 yards, folks). Check out his highlight tape.

And that will do it for this week. Be sure to check in next week, as we take a closer look at the bigger names that remain undecided.