The Power of Pink Meet - Bring on the Razorbacks

With the night sky in Tuscaloosa lit in pink for the better part of the a week now, the No. 7 ranked Alabama gymnastics team is set to take on No. 10 Arkansas in the Crimson Tide's 10th annual Power of Pink meet Friday at 7:30 p.m. in Coleman Coliseum

Share All sharing options for: The Power of Pink Meet - Bring on the Razorbacks

The lights surrounding Coleman Coliseum and the newly built Sarah Patterson Champions Plaza are illuminated by pink lights. Other landmarks around campus like the roof of the Student Recreation Center, Denny Chimes and the fountain in front of the Ferguson Center are also pink in preparation for the meet.

Coach Patterson was the first to introduce a fully "pink" meet to raise awareness of breast cancer. It has since influenced other colleges and even the NFL and NBA to follow suit. $1.45 million has been raised for disadvantaged women in west Alabama to be able to cover their medical expenses in the 10 years since the beginning of the "Power of Pink" program. A few years ago the team began recognizing breast cancer survivors on the night of the meet and just last year 17 survivors were introduced on the coliseum floor with the team after the opening fireworks. 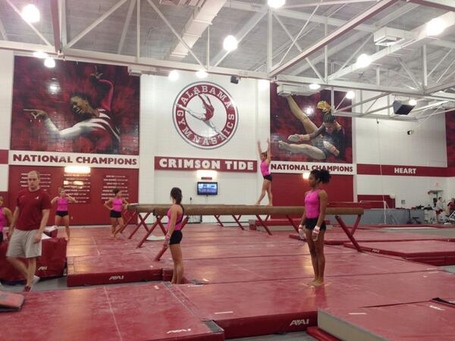 Practice for the Power of Pink meet via pbs.twimg.com

But the Alabama gymnasts cannot allow these glowing lights to distract them from the task at hand. As soon as the national anthem concludes, the gymnasts must "flip the switch," in the words of UA coach Sarah Patterson, and turn their attention to their third meet of the season.

"You've got to flip it, that's what we talk about," Patterson said. "You've got to have a mental switch, then you flip it and you go into what you're doing."

Alabama is ranked No. 7 overall, No. 4 on vault, No. 5 on uneven bars, No. 8 on balance beam and No. 11 on floor exercise. It's another top-10 showdown as the No. 7 Tide gymnastics team takes on No. 10 Arkansas Friday in the 10th-annual Power of Pink meet - Buy tickets here.