Be ready for anything.

"The team gets in the same formation group, you can't substitute defensive players, you go on a 14-, 16-, 18-play drive and they're snapping the ball as fast as you can go and you look out there and all your players are walking around and can't even get lined up. That's when guys have a much greater chance of getting hurt when they're not ready to play.  ... I just think there's got to be some sense of fairness in terms of asking is this what we want football to be?"

Most football fans are, at this point, at least passingly familiar with this particular monologue from head coach Nick Saban, whose distaste for the #HUNH offense (we're hashtagging it here in an effort to seem hip) has been well documented the past few years. What most people seem to have forgotten, though, is that the opponent that precipitated the quote was the 2012 Rebels from the University of Mississippi, who came to Tuscaloosa for a relatively ordinary mid-season game and spent most of the night giving the eventual national champs fits (they actually only scored 14 points, but did so on drives of 13 and 16 plays and even led the game for a grand total of 15 seconds, something that was pretty shocking for the home audience). It more or less set the conversation for the national audience and national media, and everything that happened in 2013 did little to make it go away*.

* — If you have the time, I definitely recommend this piece from Football Study Hall, regarding Alabama vs. the #HUNH. Use it at your next tailgate to make yourself seem educated.

Obviously, nothing is written dictating that previous encounters between these two programs will have any bearing on this Saturday's version of things. But history, obviously, is on the side of the visitors Saturday.

As for the home team, here's their offense. 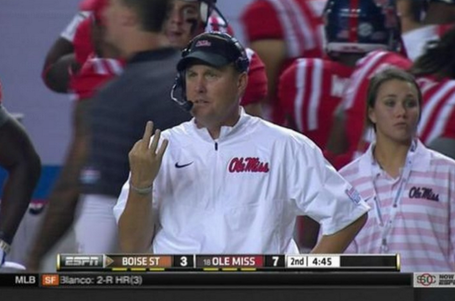 Ole Miss head coach Hugh Freeze actually followed a similar path to the SEC as Auburn's Gus Malzahn. In Freeze's case, he was able to parlay his reputation as one of the better high school coaches in Tennessee and his coaching of the state's most coveted high school prospect - Memphis' Michael Oher ... yes, that Michael Oher* - into a position with Mississippi head coach Ed Orgeron. He spent some time in the wilderness - Lambuth and Arkansas State - before matriculating back to Ole Miss after Nutt's dismissal.

* - Freeze probably doesn't care, but do you think he spent any time wondering why the people who made "The Blind Side" into a movie went to such great pains to depict him as such a doofus? The guy posted a .785 win percentage as head coach at Briarcrest Christian, won two state championships ... and yet, Disney turns him into the kind of idiot who accepts cell phone calls from his players' parents on the sidelines during a game. At least they had the decency to give him a different name.

So, one of the stupidest, most commonly used phrases in life is some version of the following: "It is what it is." It's a meaningless cliche that far too many people employ because they think it makes them sound smart.

In the case of Bo Wallace - now in what I think is his 45th season of eligibility in Oxford - it's probably the most appropriate phrase to use. Wallace, boyish charm aside, is who he is as a quarterback. That's not an insult - his career completion percentage is nearly 65 percent, he has thrown for over 7,600 yards already in his career (over 250 per game) and he has 50 touchdowns to his credit. But he is a perfectly average SEC quarterback, and the Rebs' fortunes more or less depend on whether he can keep the ball in his team's hands, instead of the other team's.

Wallace's game logs bear that out: In 2013, he threw a total of 6 picks in the Rebs' 5 regular-season losses, including a ghastly night in Starkville to end the season in which he threw 3 INTs and fumbled in overtime on the game's final play (when it looked he was going in for the tying touchdown). For what it's worth, he was also largely responsible for wins at Texas (a bigger deal at the time) and at home against then 8th-ranked LSU.

Ole Miss fields 6 skill position players - Laquon Treadwell, Vince Sanders, Cody Core, Evan Engram, Quincy Adeboyejo and Jaylen Walton - averaging double-digits in yards per catch for the season. All of them except Walton - a tailback - have at least 11 catches for the year.

Walton, naturally, is doing most of his damage on the ground, averaging 6.9 yards per rush. Fellow backs I'Tavius Mathers and Jordan Wilkins are each averaging over 4 yards per carry, as well.

Here, of course, is where we must pause and be frank: Ole Miss has yet to be tested in 2014. Early trips to Atlanta and Nashville - to play Boise State and Vanderbilt, respectively - tell us little about what this team will do against an elite defense (Boise and Memphis, curiously, are both ranked in the 40s in overall total defense thus far). And it will be facing an Alabama defense that enters off a bye week, when it appeared to be hitting its stride against Florida.

It is fair to wonder, by the same token, whether this is the best offense that Alabama will have faced to this point. Statistically, West Virginia is their superior, but Ole Miss is every bit as talented, and one could make the case it has yet to unleash its full arsenal. The Rebs will be at home, in the biggest game of the Freeze tenure to date ... and we should expect anything.

And, of course, hope for the best. But you knew that already.