College Football Random Thoughts From Around the Country: Week 5

Share All sharing options for: College Football Random Thoughts From Around the Country: Week 5

The SEC again took the spotlight with a troika of exciting college football games.

It is difficult to know what to take away from the Aggies in this overtime win. They struggled and looked quite beatable for the first three quarters including just 4 of 13 on third down efficiency. But then Dr. Jekyll (that's the good one BTW) showed up in the fourth quarter. TAMU quarterback Kenny Hill had 386 yards passing with 4 TDs but completed only 21 of 41 with an interception.

The improved Razorbacks have made this match-up relevant again. They led most of the game behind the running of the two-headed monster of Alex Collins (131 yds, 1 TD) and Jonathan Williams (95 yds, 1 TD).

However, the Hogs left tackle Dan Skipper had a rough day with two of his penalties negating big Arky plays. The first was a touchdown pass called back in the second quarter due to holding call. The second was a controversial tripping penalty called in the fourth quarter that erased a 55-yard run by Williams to the Aggies 3 yard line. The Razorbacks ended up punting on that possession.

Last week after a win over Vanderbilt, coach Steve Spurrier said the Gamecocks were "not a very good team" and had liberal use of the word "embarrassed". At the time, one would have thought it was a tactic to inspire his team or maybe disarm future opponents. But it looks like he was just being honest. SC had not lost at home since 2011 and now they have two home losses on this season.

The Tigers, fresh off an upset loss to Indiana, were not much better until the 4th quarter rolled around when they rallied for two touchdowns. Every stat leaned in Carolina's favor - including 10 more minutes of ball possession and 50 more total yards. The exception was 4th down conversions of which Mizzou converted all three attempts including two in the winning drive with the second one being the winning score from the one yard line.

Up, up, and away! (Dale Zanine-USA TODAY Sports)

As expected, the Vols gave UGA a tough game. Also as expected, Georgia running back Todd Gurley carried the team with a career best 208 yards on 28 carries. It was just enough as the Dawgs eked by the Vols. Not that he was getting much help from his teammates. Quarterback Hutson Mason was only 16 of 25 for a paltry 147 yards, 1 TD and 2 interceptions. Running back Sony Michel suffered shoulder injury after three carries while teammate Nick Chubb was an ineffective runner (11 for 32 yds).

UT quarterback Justin Worley looked good (23/35, 264 yds, 3 TD, 0 turnovers) despite missing three series in the second half with an elbow injury. He returned to guide the Vols to a pair of touchdown drives in the final period.

Not that it really matters, but UGA actually dropped one spot in the AP poll from 12 to 13.

Ole Miss 24, Memphis 3 - The final score does not tell the story here as the score was 7-3 going into the 4th quarter when the Tigers ran out of gas. The Rebs will not be able to get away with lethargic play against the deeper teams of the SEC West.
Florida State 56, NC State 41 - Another game in which depth overcomes a spirited underdog. Jameis Winston had 4 touchdown passes but also had two interceptions. He was hit early and often, compiling -3 rushing yards. The 'Noles suddenly look beatable.
UCLA 62, Arizona State 27 - Ishmael Adams had a 95-yard interception return for a touchdown just before halftime and followed that feat with a 100-yard kickoff return for another score in the third quarter.
Colorado State 24, Boston College 21 - former Bama running back Dee Hart rushed 10 times for 117 yards, including a 43-yard dash that moved the ball deep into Boston College's territory on the game-winning drive.
Yale 49, Army 43 (OT) - These two teams first met in 1893. It was Army's first trip to the Yale Bowl since 1988 and the first game against Yale since 1996. Yale leads the series 22-16-8, but had not beaten Army since a 14-12 win in 1955.
Minnesota 30, Michigan 14 - Wolverines coach Brady Hoke slips further down the quicksand in a humiliating home loss.
Air Force 28, Boise State 14 - Now you know why former BSU coach Chris Petersen jumped ship for the Washington Huskies job. Cupboard = bare.

Krazy Kristi's "SHUT UP!" of the Week goes to Penn State. After having bowl eligibility restored for this season, the Nits go out and get shellacked on their homecoming by Northwestern 29-6.

If you have a friend or family member who is getting married this Saturday, you need to disown him/her because this is going to be an incredible day of SEC football. I hope it's not a beautiful day because I will be sitting on the couch ALL day:

- If you don't have school or work on Friday, this might be worth watching. Might the Ducks be looking ahead to next week's game with #8 UCLA? Both teams are 4-0.

- This game could determine the fate for the rest of the season for both teams.
Vanderbilt @ Georgia 3:00 PM CT / 4:00 PM ET SEC Network

- The Pac-12 respectfully requests that you NOT watch this game to the end. 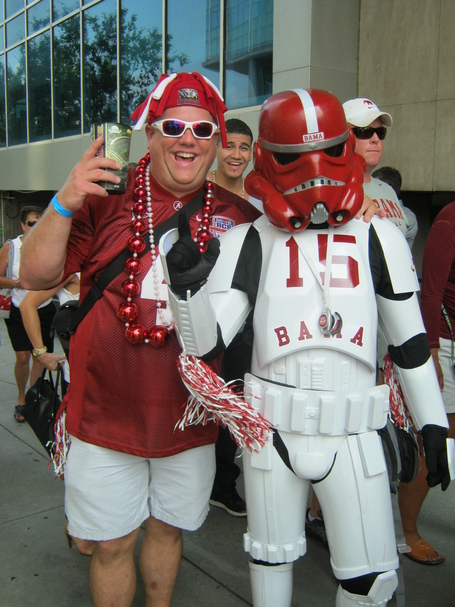 Alabama at Ole Miss will be at 2:30 PM CT / 3:30 PM ET CBS - quite possibly the most important game on the schedule for the Crimson Tide.