In high school I was a long haired idiot, somewhat bookish, and full of pretentions. I read a lot of Faulkner. "Lots of people read Faulkner," you say. Sure, but only I really got it. Well, only me and my friend Josh. He was equally long haired, bookish, and full of pretentions. As to being an idiot, he would go on to write a PHD thesis about hyperbolic-3 manifolds which I know has something to do with math, but only because he told me. So, by virtue of being a sixteen year old boy, he was still an idiot, but probably less so than most. We sat around and talked about Faulkner a lot.

One summer evening between my tenth and eleventh grade years, we were lucky enough to get to hang out with Josh's older brother and his group of friends back from college. Most of them were sophomores but I seem to remember that there was a junior or two. Man, could they talk about Faulkner.

At some point, one of the guys brought up their grand literary pilgrimage. A few years prior, several of them hopped in a car. With a quick detour to see the house where Elvis was born in Tupelo they went to Rowan Oaks, Faulkner's Greek revival house in Oxford, Mississippi. They tossed a Frisbee around his yard, went to Square books, and then they went to the five star Taco Bell.

We left Birmingham a few days later. Elvis's birthplace is roughly the dimensions of a straight shot two car garage if both cars are Fiat Spiders and it's in constant danger of pelting by foul balls from the Elvis Presley Memorial Baseball Field. Rowan Oaks was rotted in all the right places. In vain, we went from window to window hoping to see the wall he wrote the outline of The Fable on. In my memory the neglected façade and trees dripping Spanish moss would rival any early R.E.M. cover at conveying Southern Gothic but in 2005 John Grisham got a hold of the place and now I hear everything looks great - gleaming columns and resplendent fascia. That's surely for the better, but I liked the fading lady motif. Square Books wouldn't let me hold the $2300 signed copy of The Sound and the Fury. Then we went to the five star Taco Bell. 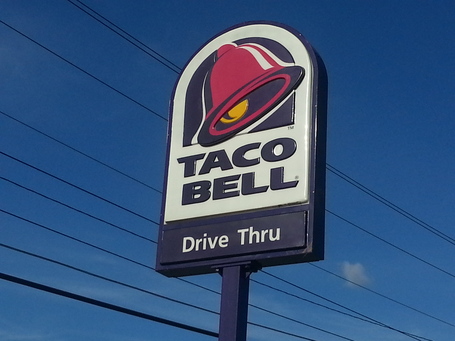 Twenty plus years and hundreds of miles away, I can't figure out which of Oxford's Taco Bells my memory so esteems. Google tells me it's most likely the one on University Ave. If Yelp! Is any indication, it has experienced decline.

When did things go south for my favorite Mississipian fast food establishment? I can only speculate. I would think it happened sometime between Eli Manning's graduation in 2004 and his wedding to fellow Ole Miss alum Abby McGrew in 2008. A lack of delicious tacos to one who, over four years in Oxford, became accustomed to regular access to the same would explain why they were compelled to eschew the home tacos of their alma mater and perform their nuptials where ersatz tacos were plentiful: in San Jose Del Cabo, dangerously close to the cursed Californian city he so successfully fought to escape. But that's just a theory.

Another theory is that I was young when I ate it. Fast food is notoriously beloved by the young. My eight year old pleads for happy meals as my two year old cries "Hamuger!" by which he means French fries. I enjoy the occasional Big Mac or Taco Supreme, but they are usually an expedient that is to be endured. There comes a time to put away childish things, or at least a time to insist on calling them "collectables."

What follows is a more nuanced taco than your standard Tex-Mex fare. I won't pretend to any claims of authenticity because authenticity is a silly shibboleth. Seek flavor. This is pork with citrus and various vegetables. It came from my head which came predominantly from Ireland and Italy. But I've eaten and read and cooked before. If whoever you cook for asks if this is real Latin American cuisine, tell them yes. They'll believe you because there's no cheese involved.

For the Cilantro Yogurt

Start by generously salting your butt. Cut all six limes in half, peal and smash the garlic. Take five of the jalapenos and decide how spicy you want these tacos to be. I deseed four and retain the seeds from one of them. I get a little tickle of heat without being blown away. But I'm generally cooking for a crowd that includes children. This would be awesome with the seeds of all five peppers menacing your taste buds. Whatever your balance, rough cut the lot. 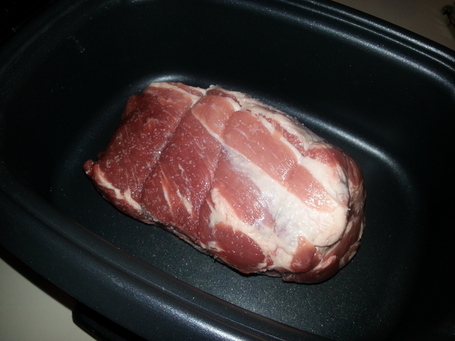 Place the meat in a crock pot. Pour in a 50/50 mix of Orange Juice and Chicken Stock until the meat is mostly covered. Squeeze the limes over the pork and toss them in, rinds and all along with the jalapenos and garlic. Set on low, cover, and cook for seven hours. About half way through, turn the butt over. 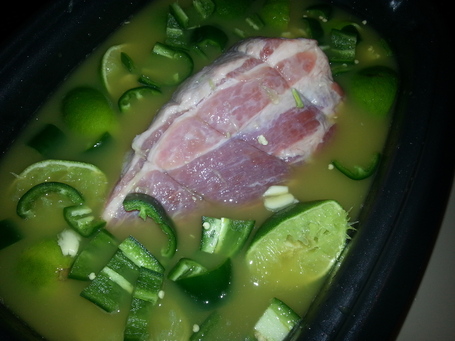 While the crock pot is doing its job, deseed and mince the tomato, jalapeno, and cucumber for the salsa. Add the lime juice and a bit of cilantro. Finish the salsa with salt to taste and let rest for at least an hour. 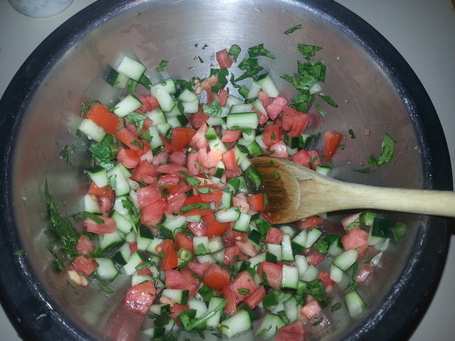 If by some chance you have an older crock pot without a timer, get rid of it. Spend the sixty or seventy dollars for one with a timer, not so you can know just how long your food has been cooking, but so you can forget about it for a while. There is an idea that real cooks don't use timers in any situation and I'll admit to being guilty of playing it loose on occasion when grilling, but that's when cooking time is limited to at most five minutes a side. On longer cook times you are constantly checking for doneness or color. The conceit that you will best a timer is a foolish illusion. Don't even bother. You won't win. Trust the tools.

Put the meat in a large bowl and let cool. Don't throw away the braising liquid. When cool, pull the meat apart and place in a Dutch oven or large skillet with two minced jalapenos (and as many seeds as you want), a handful of chopped cilantro, and two cups of braising liquid. Reduce over medium heat and salt to taste. 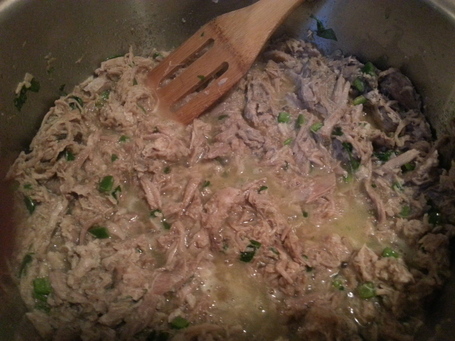 Because tomorrow morning I might dump the remaining salsa on eggs or spead the pork over... something. I have no idea. If you just put a lot of cilantro in either the meat or the salsa you'd be fine when they are all mixed together but I might use them separately so I try to get a full flavor from each.

Get slightly more redundant by adding cilantro and salt to the yogurt and mix well. As per usual, crème fraîche, with all its labor intensive accent marks, is a likely preferable substitute to yogurt, but that "î" is a right royal pain in the ass to type so I avoid it as best I can.

Warm some tortillas, add meat, salsa, and a bit of yogurt and eat.

In one of my early posts I expressed a desire to fill out a plate by suggesting side dishes. I'm stymied here. The whole idea of a taco is that you put it all inside. No one gets a taco with fries so I'm not going to bother. My wife and I considered a corn and black bean salad, which would be delicious with the above. Especially if you just put it inside. So let it be.

In Spanish, the word "taco" translates directly as "billiard cue." That's apt. My taco is to a billiard cue about as the average Taco Bell taco is to my taco. But you weren't there those many years ago. I ate like a king for less than four dollars (yucky Pepsi aside). I've been to taquerias, lauded taco trucks on Valley Ave., and seen Windsor, Canada. But youth are impressionable and every time I have a taco of any kind I think of Faulkner and Oxford. I don't mind the connection. Considering that we've only lost to Ole Miss four times in my forty-one years, tacos are high among my football comfort foods.