Share All sharing options for: The Jumbo Package │10.02.14

"If you have more guys in the box than they can block, they fake the ball to the back and throw a smokescreen, or bubble screen, or flair the guy out there and throw him the ball and block the perimeter. Those things all count as passes," Saban said after Wednesday's practice. "They run the guy on the rocket sweep and toss him the ball, it counts as a pass but is really a run. "When you play these kinds of teams sometimes their statistics are distorted relative to how they really move the ball because a lot of their short passing plays complement their running game and they're all tied together."

So a pass is a run and a run is a run but a run cannot be a pass.

4 and 5. Alabama -6 at Ole Miss Under 52: This wager is all about taking advantage of Ole Miss' offensive line, which is simply not that good. If Alabama can take away the run game, Bo Wallace will chuck some interceptions. On the flip side, look for Alabama to lean on the run game more to keep Blake Sims out of third-and-long. Getting Derrick Henry and T.J. Yeldon the football is a good thing. Nick Saban off a bye week is a very good thing.

This is the first I've heard of the Ole Miss offensive line being not very good. (Could be I just haven't been paying much attention to Ole Miss but I digress) I've heard they aren't one of the best but not good?

Ole Miss is tied at 41st in the nation for sacks allowed (7) and the Bama line is 11th at just four. (Btw there are 23 teams who have allowed just 7 sacks this season so the rankings are a bit off there). You could point to tackles for loss allowed where the Rebs sit at 90th with 29 allowed in just four games. Contrast that to Bama who has allowed just 18 and sits tied for #25. (the #1 team is Cincinnati who has allowed only 7 TFL).

So are those numbers good enough to say Ole Miss' offensive line "is simply not that good"?

According to Yahoo! Sports, Ole Miss's football and women's basketball programs are under NCAA investigation. Most of the potential violations were in basketball, and the football side relates to a "previous Ole Miss staff" (read: Houston Nutt). 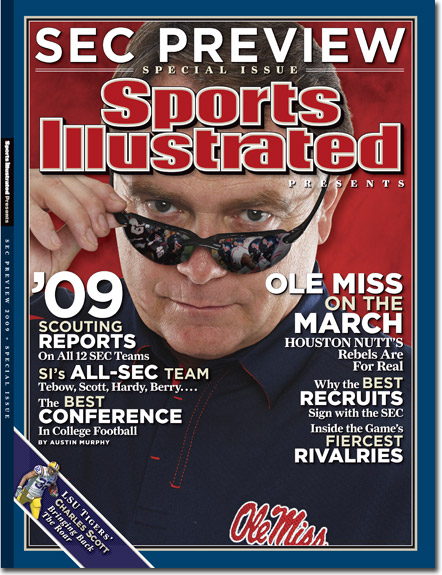 -- From the action we saw, Blake Sims threw two passes as the receivers and quarterbacks did their route tree. He wasn't spotted throwing in Tuesday's practice, but our viewing window represents just a small fraction of the practice overall. Jacob Coker and Alec Morris were leading the two lines of passers. On Wednesday morning's SEC teleconference, Nick Saban said Sims wasn't having any issues related to the bruised throwing shoulder suffered Sept. 20 against Florida. Saban will meet with reporters after practice.

And Bo Wallace is bearing the brunt of the hatred being hurled at the #11 team in the country. "The defense is great, but you never know with Bo Wallace." Trust me: there are a lot of "good" quarterbacks who, if they had to do what Bo Wallace has had to do so far, would have struggled a lot. He's capable of making some miraculous throws.

This doesn't seem like it relates to the question at hand, but I'm getting there. You see, before the season began, I thought this Ole Miss team would go 9-3 in the regular season and win its bowl game. Now, I'm thinking it's more like 8-4 with a bowl win, but I don't want people to jump to the conclusion that it's about Bo Wallace. It isn't. It's about the SEC West and the University of Tennessee. Arkansas was supposed to be a joke. They're not. Mississippi State wasn't supposed to beat LSU. They did. A&M was supposed to take a major step back with their "shitty" defense and the absence of Johnny Manziel. They're 4-0, and at times their offense looks BETTER than it did last season. Tennessee was replacing their entire offensive line and was expected to really struggle. They took Georgia to the wire and look much improved. Alabama is Alabama. LSU is down but full of talent. Auburn played in the national title game last season.

It's just not as easy as many expected it would be to get to nine wins. Things have changed.

#2 Lawd is the SEC West a SOB this year.

As reported by multiple outlets during the NCAA offseason, Alabama has taken a hard-line stance in blocking senior Daisha Simmons from transferring to Seton Hall for family reasons. ESPN college basketball analyst Jay Bilas said in an interview with Swish Appeal that the NCAA has done the right thing in response to the blocked transfer request, but Alabama is "acting in a shameful fashion".

Simmons' mother, Christena, told Swish Appeal that the explanation for blocking the transfer that she received from Alabama assistant athletic director Shane Lyons was, "They were down one scholarship and it was too late to replace her."

Well this doesn't look good, like at all. Let's be real, I think we can do better than hold up a player (who has already graduated) from transferring to a school closer to home so she can take care of her mom.

But that's also where the Rebels' increasing talent and experience at cornerback factors in. Former star recruit Tony Conner is a sophomore now while senior Senquez Golston holds down the other corner position. "You can't load up on both every snap," Freeze said. "So there's going to come a time where our kids have to win a one-on-one. If you take turnovers and everything, all of that is equal, it'll come down to who wins the most of those one-on-one battles."

With all of the huge games on the horizon, the SEC race might be decided by the number of not-so-huge games. When you've got so many teams bunched together, the odds will tell you that everyone will beat up on each other. What could determine the SEC race, then, is who has the most easy games. And that is why a Mississippi State vs. Missouri SEC title game is a distinct possibility