Good things happened when Mr. Sims took off with the ball (and yes, he IS levitating that dirt clod with the power of his mind.)

In case you were under a rock1 in the third quarter, you are probably aware that Cam Robinson suffered a lower leg injury on Saturday. Originally reported as a high-ankle sprain, it’s come out that the big man had surgery on Sunday to repair a torn ligament. As a result, the best-case scenario is he’s back in time for Mississippi State, but I suspect the Tide will be without the stud freshman until Auburn or even the postseason.

1 | Or taking a nap because you thought the game was over. Or passed out drunk. Or otherwise incapacitated.

So how big a deal is this going to be? Probably a big deal:

That ain’t good. Robinson went down early in the 3rd, so this is effectively a first half / second half split. The most disturbing change up there is the nearly 5 yard drop in yards per play. Keep in mind, however, that Alabama was in run-out-the-clock mode for most of the second half, as evidenced by the shift from an even pass/rush balance in the first to a 25%/75% split in the second2. The more useful numbers here are the rushing splits, which reveal a half-yard drop in yards per carry and about a 15% drop in rushing success rate.

2 | This could also have happened because Robinson is pretty critical in pass protection, whereas Leon Brown is more known for his road-grading.

This drop wasn’t just the absence of Robinson — Kiffin got a little cute with his playcalling on the drive Robinson went out, Tennessee was probably expecting the run given the game situation, and they were just playing better on defense than they did in the first half — but this is something to watch for against LSU. All that being said, I thought Leon Brown and Bradley Bozeman did pretty well given the circumstances, and hopefully the reps at their new positions over the next two weeks gets everything settled down in time for the Tigers. 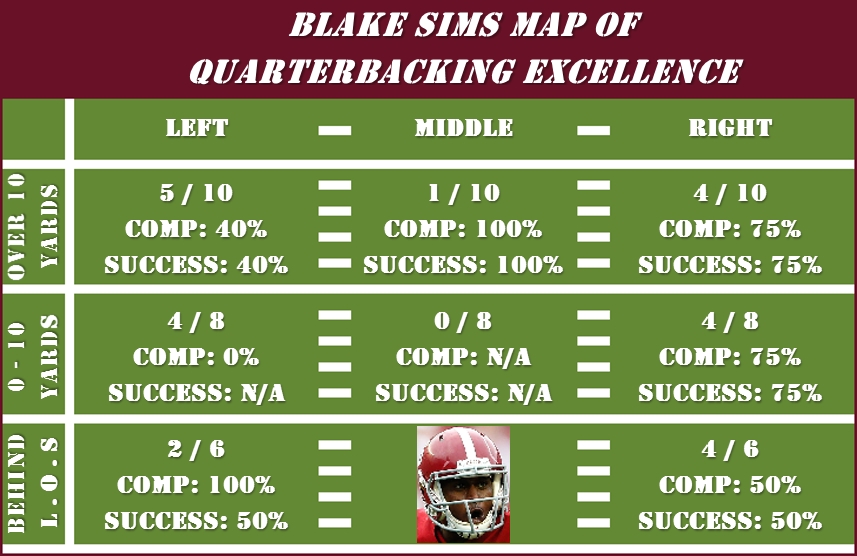 Very interesting results here this week, particularly in light of the (presumed) injury situation with Blake Sims. 10 of his 24 attempts were of the 10 yard plus variety, which is a big, big departure from the split as of late3. Hopefully that’s a sign Sims is beginning to get past whatever happened in the UF game. The left/right distribution was more balanced this week as well, with 11 targets headed to the left and 12 to the right. The lone pass over the middle was a drive-saving 13 yarder to Amari Cooper on third and 7, during the second drive of the game.

Last week’s trend of throwing early and often continued against Tennessee, with Kiffin dialing up first-down throws over 44% of the time, about 9% more often than normal, at the expense of some second and third down attempts. That may not have been the best choice, however, as the success rate on those throws was down over 8% from the season norm. Third down success was down just a tad, but this was offset by an almost 5% jump in second down passing success rate.

Third downs, man. Not only did the Tide run on this down almost 20% more often than usual, but they picked up the first down almost every time. The frequency was likely due to trying to run the clock out in the second half, and the success rate was definitely buoyed by a couple of great scrambles by Blake Sims. This level of success on third was down pretty critical, as success rates were well off the season pace for both first and second down runs.

The direction splits were pretty balanced this week — if one attempt around the left end had headed around the right end instead4, the distribution would have been symmetrical. Tennessee was absolutely gashed up the middle, giving up successful runs 73% of time. This offset the putrid results when running over right tackle (likely due to Austin Shepherd being banged up) and around the left end5.

4 | Say, for instance, that absurd jet sweep out of the wildcat that lost 9 yards, Lane? Maybe don’t run that again, Lane.

Akin to the previous chart, the almost 80% success rate on third downs is outstanding. This game was closer than it should have been6, and the main reason the Tide pulled it out is that number right there. Alabama’s been pretty lethal on third down all year, but Saturday’s performance is about as good as it gets against a good defense.

Tennessee bowed up a bit in short yardage, holding Alabama well below their 75% mark for the season. This was offset by the Tide’s puzzling efficiency in the shorter intermediate distances, where they ran successful plays 26% more often than usual.

6 | Go back and watch Tennessee’s first scoring drive. Absolutely putrid officiating basically handed them a score — more on that later.

Blake Sims in the ‘gun was pretty prevalent this week, as he lined up there 16% more often than usual, with a welcome 11% uptick in efficiency. This came at the expense of the pistol, which is now the waffle iron7 of the Alabama offense. Play action passes were particularly nasty this week, picking up 112 yards over three non-garbage attempts8.

7 | As in, that kitchen gadget that you enjoy immensely but only trot out once in a blue moon. Unless you’re Nevada, where waffles happen every weekend.

Not much worth noting out of the backs section, aside from being particularly effective running out of the I this week. 4 wide receiver sets were rather prevalent this week, with about a 17% uptick in usage and the status quo in efficiency. No 5 wide this week.

You might have heard of that Amari Cooper guy, he’s pretty good at this whole football thing. Yeldon continues to move up the chart, soaking up targets that might otherwise have gone to Kenyan Drake. O.J. Howard was not targeted this week, but still managed to drop everything that was thrown to him.

Yeah, so, Tennessee did some really interesting stuff this week. For example, they really pushed the limits on having too many men in the backfield on several plays, usually due to the right side of their line getting way, way back from the ball. This was particularly egregious on the play immediately after Marlin Lane’s 44 yard run, where it appeared the right side of the line was a full yard and a half off the line of scrimmage, which is kind of illegal. Not necessarily competitive-advantage-illegal, but illegal nonetheless.

Speaking of that run, a blatant hold on Cyrus Jones9 allowed Lane to get past the secondary, even though it occurred right in front of the line judge, on the ‘Bama sideline. That was after a very questionable spot after a third-and-1 run deep in Tennessee territory that should have been measured at the very least. Real banner drive by this crew, and unfortunately indicative of their shoddy performance on the night.

9 | In conjunction with a really, really awful angle taken by Nick Perry

UPDATE: Glen (who is much better at this than I am, it should be noted) correctly pointed out it was Tony Brown who was held on the play noted above, not Cyrus Jones. Whoops.

Tennessee’s offensive formation against the Tide: hurry-up, no-huddle, shotgun, 1 back, 3 wides, and 1 tight end set a yard and a half back of the tackle. The 11 personnel look was present on 43 of Tennessee’s 79 snaps, with most of the rest having that tight end split out wide. Mix it up a bit, Butch, sheesh. Get your Neyland on and run some single wing — they might actually like that up there. Apparently the pistol is also Butch’s waffle iron, showing up on just one play, and Not Working.

Speaking of the no-huddle, Tennessee was pretty decent at that on Saturday, posting a higher success rate than Ole Miss and Texas A&M did. They also had some decent success running play action. usually out of the zone read with Josh Dobbs.

Dobbs had way, way, way too much success on third down, posting a success rate over twice as high as the Tide’s season average (when you remove the one attempt Nathan Peterman had in the first). Dobbs’ ability to extend drives with his legs, both on designed runs and completions off scrambles, was the main reason Tennessee hung around as long as they did.

Short passes were the Tide’s bugaboo this week, with Tennessee finding success 29% more often than usual for this defense. This was balanced by attempts between 5 and 15 yards from the line of scrimmage, which Tennessee went to more frequently than the Tide typically sees, but with reduced success.

Too much good for Tennessee here. The most stunning result of the game to me was their ability to run on the Tide defense, which came into the game pacing the country in defensive rushing S&P+. The main culprit was Josh Dobbs, who really took it to the middle of Alabama’s defense on draws and scrambles. I suspect part of the reason Tennessee’s rushing offense was not well-regarded coming in is that Justin Worley cannot run like Dobbs can, and as we’ve seen with Blake Sims, a highly mobile quarterback can make all the difference. Most of Tennessee’s successful third down runs involved Dobbs, which was very, very frustrating to watch.

That third down success rate is pretty glaring. This is beating-a-dead-horse territory, but that’s way too high for this offense, Dobbs or otherwise. It seemed to me like the defense relaxed after the first quarter, and that simply cannot happen again this season. If that occurs against any of the remaining SEC foes the Tide will pay dearly.

4-6 yards to go seems to be a problem for the Tide this season. I suspect that’s because it’s a situation that lends itself to any play call on any down, which would make defending in those situations more difficult. At any rate, Tennessee really had Alabama’s number in those distances, hitting a success rate over 30% higher than the Tide’s season mark.

Xzavier Dickson didn’t really get 3 sacks this week — I discovered he had two previous sacks that I credited elsewhere, but that is now fixed. Reggie Ragland continues to be an absolute terror, generating his first forced fumble of the year on a beautiful form tackle to Josh Dobbs in the second quarter, setting up a short field for the offense. He’s now the only Tide defender with at least one interception, sack, forced fumble, and pass breakup. Not listed is Dalvin Tomlinson, who collected his first sack of the year.

As usual, if I missed anything important, feel free to publicly shame me in the comments!