WARNING: SEC bias and overflowing levels of gump ahead

All statistics are courtesy of Football Outsiders, home of the F/+ Combined Ratings for college football.
The Fremeau Efficiency Index (FEI) was created by Brian Fremeau; check out his website BCFToys for other goodies.
The S&P+ rating was created by Bill Connelly; check out his college football analytics blog, Football Study Hall.
Hat tips to Addicted to Quack's kalon and FO's 7th Day Adventure column for the inspiration.

This, to me, was the most interesting game of the season thus far. Somewhat akin to the Tide’s game against their other East opponent (back in the before time, in the long long ago1), the game started out with an absurdly long touchdown on the Tide’s first offensive play, albeit to Kenyan Drake instead of Amari Cooper. Florida proceeded to capitalize on miscue after miscue to keep it close through the first before wilting under the Tide onslaught over the next three quarters.

1 | September wasn't that far back, but it sure feels like it.

Tennessee, on the other hand, had a very different experience. Cooper added a 41-yarder to his 80-yarder, followed by a short T.J. Yeldon touchdown run2 and a longer Blake Sims scamper that was a near carbon copy of his outrageous one against Texas A&M. The Tide was rolling at 27-0 with no end in sight.

Then, the Tide relaxed and the referees got involved.

Tennessee’s ensuing drive was easily their most explosive of the night, featuring a 44-yard Marlin Lane run — buoyed by a blatant hold on Tony Brown that wasn’t called — that set up Tennessee’s first score of the night. From there, Kiffin got cute, Dobbs got confident, and Tennessee clawed back to within 10 midway through the third quarter.

Then, The Drive happened.

Check out CB’s play-by-play rundown if you’d like, but you all saw it. Lights-out playcalling by Kiffin, hard running by Yeldon and Derrick Henry, and another heady, lethal scramble from Sims silenced Neyland Stadium and effectively ended the game. Tennessee managed another field goal, but that was all she wrote. At the end of the day, Cooper’s record-breaking night was just far too much for Tennessee to handle.

My pick was spot on, but I’ll freely admit that was not the game I was expecting. As I stated in this week’s Charting the Tide, Alabama cannot afford to let any of their future opponents back into the game like that. Tennessee was overmatched, but LSU, Mississippi State, and Auburn will not be.

As it’s a bye week, there’s no opponent to preview, so I thought I’d do something a bit different for this week. Below is a look at where every team in the SEC stands in the advanced metrics, along with some idea of where the SEC West3 is headed after 9 weeks of glorious football.

3 | If Georgia doesn’t win the East, they deserve to be deported to the ACC.

4 | That Orange You Can’t Sit With

Tables grouped by division and ordered by pertinent F/+ ranking

Wondering what all of this means? Check out the PTN primer!

So, what do we know?

That the SEC West features the four best teams in college football, with all disrespect to FSU and Oregon intended. I firmly believe these four teams could beat any other team in the country on a neutral field, and barring significant injuries to key players, I expect that to remain the case for the last few weeks of the season. Mississippi State is now the lone undefeated squad in the SEC, but I personally feel that changes on November 15th when they encounter what is sure to be a lusty crowd in the stands and a vengeful Tide on the field at Bryant-Denny. This race is wide open, but we’ll get to all of that in a bit.

’Bama continues to pace the country in S&P+, which bodes well for a nasty slate of games down the stretch. I’m beginning to grow tired of FEI, because it’s getting kind of sad at this point. Notice how those four schools at the top are also the four schools at the top in S&P+6? Yet, they’re no higher than sixth in Mr. Fremeau’s pacific-laden FEI ratings, which feature a three-loss USC at #4. Yeah, um, no. These ratings are very kind to Georgia, currently 2nd, largely because of their outstanding special teams unit and country-leading field position rating. Note that previously left-for-dead LSU is now lurking inside the top 15, right where Lucky Les wants them.

6 | Also four of the top six in the shiny new CFP rankings, which seem to meet with most folks’ approval.

The offensive and defensive charts paint a clearer picture of why each team is where it is. You’ll note the big four all sport top-12 rankings in offensive and defensive F/+, which might have something to do with their success on the field thusfar. Note also that LSU is top-12 in both S&P+ splits, which means next week is going to be yet another slugfest with the Bayou Bengals. Georgia has paired a very good offense with a good-enough defense to field the only complete team from the East, and will likely be a tough out for the West representative in December.

Gary Pinkel and Steve Spurrier might want to try to merge teams or something, because if you took the Gamecocks offense and paired it with the Tigers defense, you’d have an SEC West team. Unfortunately, the ol’ ball coach’s high-flying offense is once again hampered by a putrid defense, and Missouri can’t do anything right when they’ve got the ball. Arkansas’ record belies their strong performance7 on the field, as they’ve got a pretty solid defense to go with their pretty solid offense. Butch Jones is probably wondering what possessed him to try to redshirt Joshua Dobbs, as Tennessee’s total inability to do anything on offense with Justin Worley has wasted a stout defensive performance on the year. Texas A&M, Kentucky, and Vanderbilt have participated in the 2014 college football season.

7 | Outside of special teams, that is.

Special teams are all over the map, ranging from the aforementioned scary Dawg unit and sneaky-good LSU to the impossibly bad Razorback contingent. Just north of Arkansas is the Tide, who while improving continue to be held back by poor special teams play earlier in the year. Despite the efforts of the country’s finest punter in J.K. Scott, shaky placekicking and some truly boneheaded return work have put the Tide deep in the hole. At this stage of the season, even a perfectly average special teams unit would propel Alabama to the very top of the F/+ rankings. Returning hasn’t been an issue the last two weeks, but placekicking is still a question mark, with Adam Griffith shanking a (somewhat extended) extra point last Saturday. Hopefully this situation continues to improve (or, at least, not get any worse), as the Tide’s remaining SEC foes will make ‘Bama pay dearly for any miscues in this department.

UPDATE: Turns out Griffith has been dealing with an undisclosed injury. That certainly casts a different light on his struggles.

So what’s going to happen in the West?

A barnburner8. Each of the big four have two games remaining against each other, so this is far from decided. I’ll leave the Alabama games to their respective PTN’s, but three other games concerning the West deserve special attention: 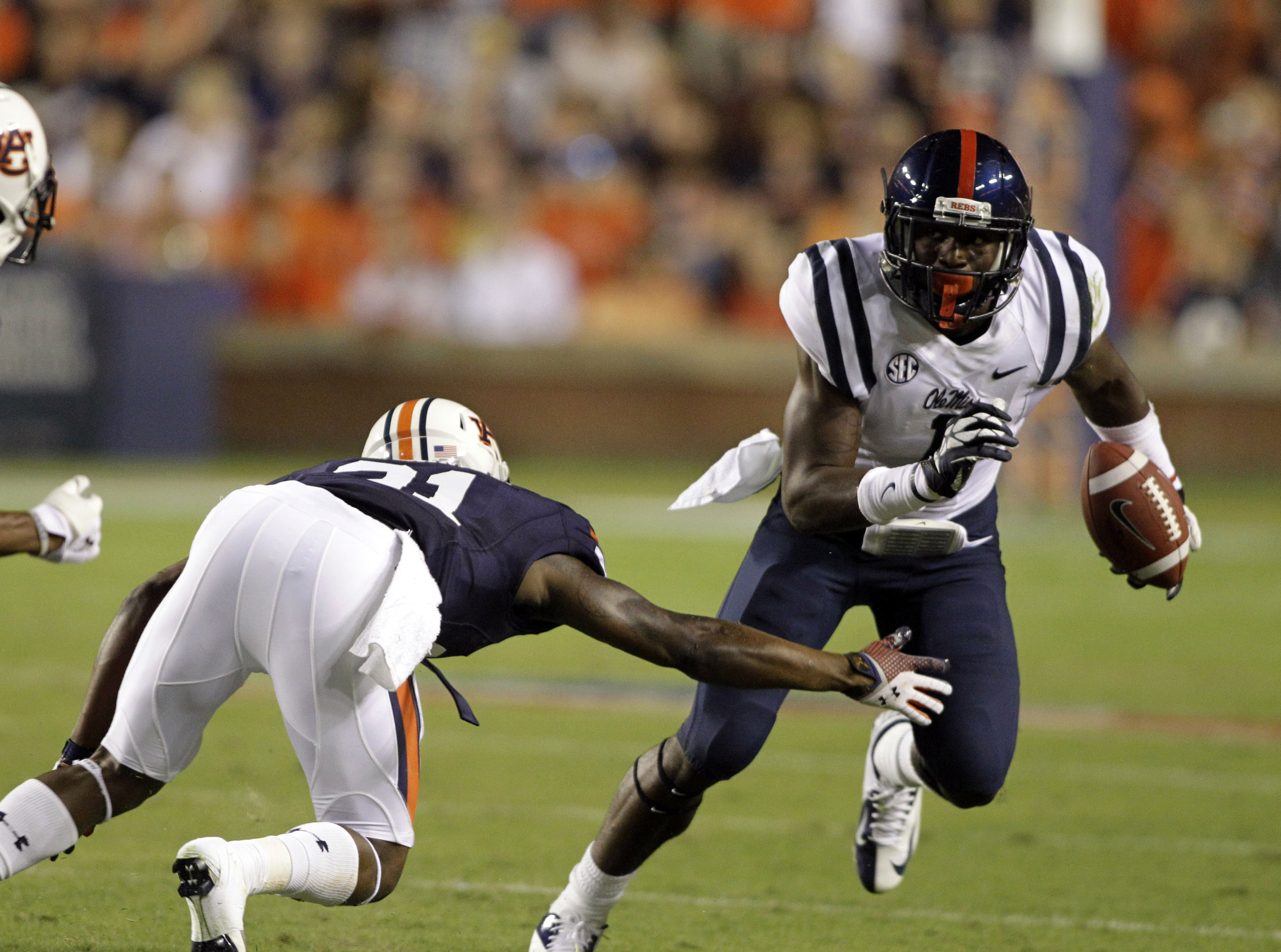 This is a classic strength vs. strength matchup, pitting the SEC’s finest offense against its finest defense. It goes even deeper than that, as Auburn paces the country in offensive passing S&P+, which would be great for them and all if Ole Miss didn’t sport the best secondary in the country according to defensive passing S&P+. I’m not thinking anybody has the edge here.

The more interesting matchup is on the other side of the ball, where Ole Miss’ strength in the passing game fortunately lines up nicely with Auburn’s weakness on defense. Trovon Reed, Jonathan Jones, and Jonathon Mincy have played well, but the matchup with Laquon "SEC’s #2 Wide Receiver" Treadwell, Cody Core, and Evan Engram is not a good one for Auburn. On top of that, this one’s at Vaught-Hemingway, and Ole Miss has a healthy edge on special teams as well. It says right here that this week is when the other shoe FINALLY drops for Auburn, and the freefall to 8-4 begins.

THE PICK: Ole Miss, because F-AU. 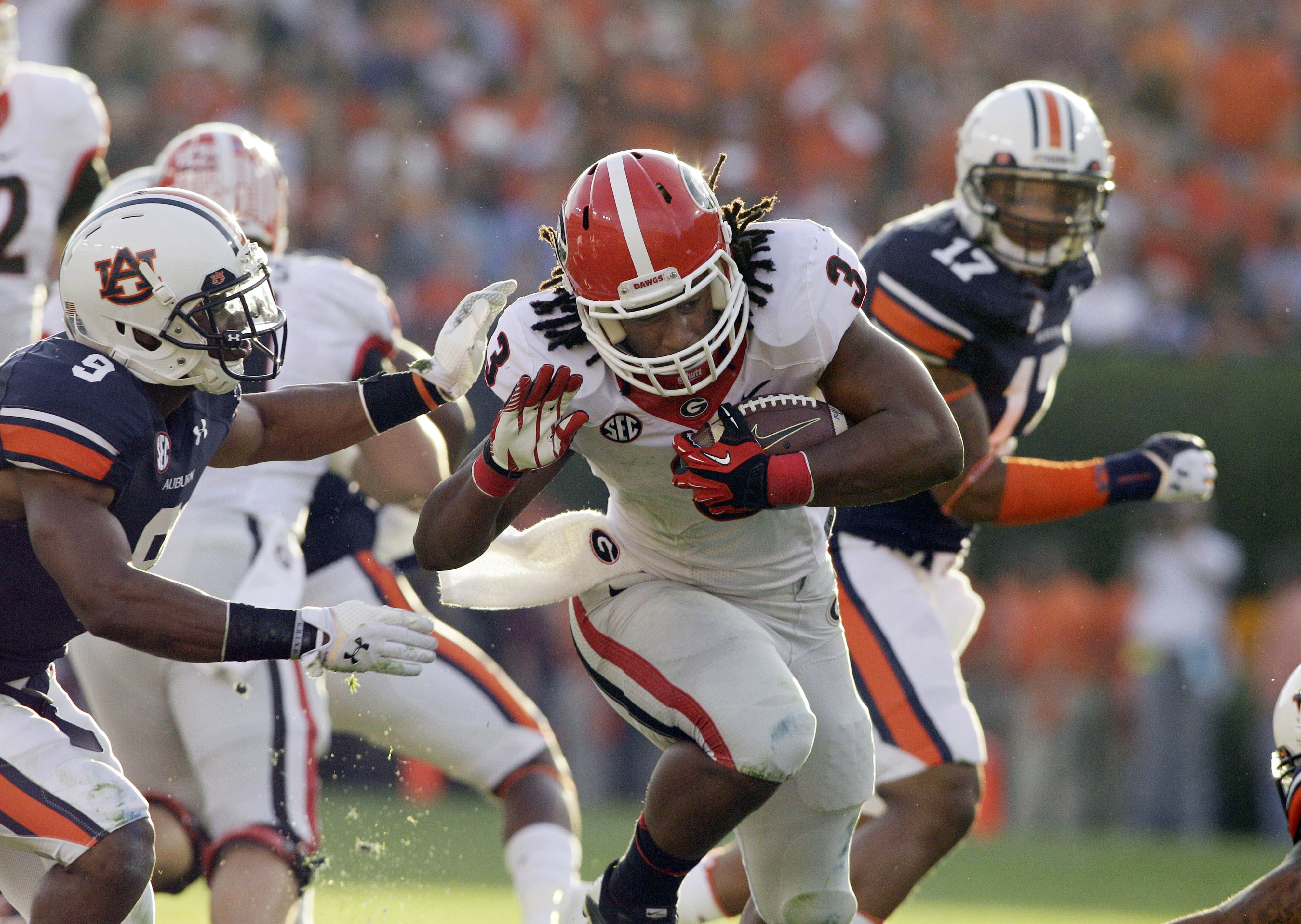 Auburn gets to blitzkrieg Texas A&M at home before this one, but this is the second of three nasty road games to close out their year. I’ll skip over the matchup when Auburn has the ball — it’s not going to be pretty, and the Tigers will put up plenty of points.

The key matchup is on the other side of the ball, where Georgia’s rushing offense (currently 2nd in rushing S&P+) will need to carry the day against Auburn’s sneaky-good rushing defense (currently 6th in rushing S&P+). Todd Gurley will hopefully be returned from exile in time for this one, and I think that will make all the difference for Georgia. I expect Georgia to go ball control, hammering away at the Tigers defense and keeping Nick Marshall and company puffing away on the sidelines. Look for some fireworks on special teams, as Georgia has a significant advantage in the return game according to the applicable FEI splits. This is also a rivalry game, in Georgia’s house, and I suspect that will swing things their way. The most important factor here, however? My good friend VFRBulldawg would never feed me the world’s very best pulled pork again if I picked against his beloved Dawgs, and I do love me some pulled pork.

THE PICK: Georgia, because barbecue is important (also, F-AU). 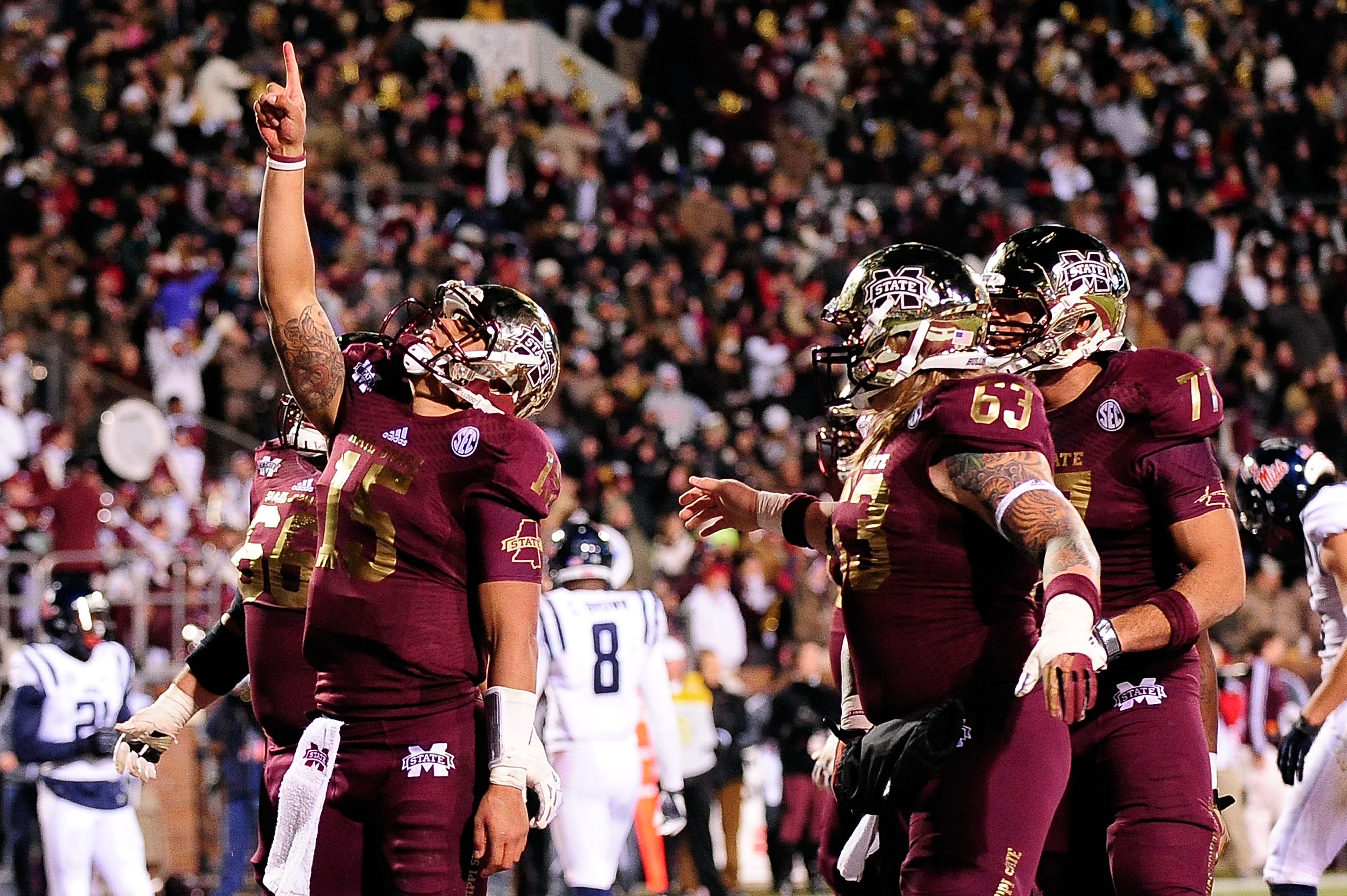 The game everyone’s circled since October 4th finally arrives. CLANGA will no longer have that unblemished record, but they will be all that stands between Ole Miss and the SEC title game. The Bulldog offense is pretty balanced, and Ole Miss’ slightly softer run D will be tested by human Power Star9 Josh Robinson and Heisman front-runner Dak Prescott. Ole Miss will not be able to load the box, as Prescott is dual-threat in the truest sense of the term, particularly if De'Runnya Wilson finds himself open. The Rebels ability to hem in the CLANGA rushing onslaught will be the deciding factor in the game.

9 | Of the Super Mario variety.

On the other side of the ball, I highly doubt Ole Miss will be able to run worth anything against a stout Bulldog run defense. Fate will once again call on Bo Wallace to carry the day, and with this game being in Oxford you have to believe Good Bo will show up to play. CLANGA sports a good-but-not-great secondary, and Ole Miss will surely find some success through the air. The end result will be a neck-and-neck slugfest and a classic Egg Bowl, one to be fondly recounted (or reviled, as the case may be) for decades. But I think the combo platter of ruining Ole Miss’ best season in nearly 60 years, the Heisman Trophy push for Dak Prescott, and a shot at the fourth playoff spot will be enough for CLANGA to overcome the Rebel’s home field advantage, paving the way for the Tide to coast into a 2012 rematch against Georgia in the SEC Championship Game.

Ron's just kicking back this week, enjoying the bliss of crushing Tennessee's hopes and dreams for the eighth time in a row.