Rebels, Black Bears or Land Sharks? Whatever you call them, the Ole Miss defense poses a formidable challenge

Alabama hits the road for the first time this season on Saturday against the 11th-ranked Ole Miss Rebels, and it will mark the rare occasion in the Nick Saban-era that the Tide faces a defense that, statistically, is even better than its own.  The Ole Miss Rebels are ranked first in the SEC and fifth nationally in total defense, with 248 yards allowed per game, just ahead of Alabama (250.3 ypg).

The Rebels defense, who call themselves the "Land Sharks", are a stingy bunch.  So far this season, the Rebels' four opponents have had 53 offensive drives, resulting in only two touchdowns and six field goals.  Thirty-three of those drives have ended with a punt, on downs, or with the end of a half, while another 12(!) have ended in turnovers.  The Rebels lead the conference and are tied for second in the nation in interceptions, totaling nine so far. 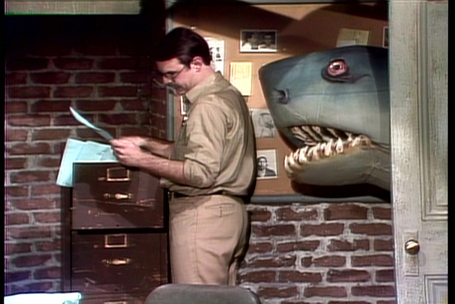 I'm the Land Shark, and you're not.   via spielbergfanclub.com

In one of the most high-profile games ever held in Oxford, the Rebel faithful will be rowdy and the Rebel defense will be primed for an upset.

Perhaps the most well-known defensive player for Ole Miss is sophomore defensive tackle Robert Nkemdiche.  The 6'4", 280-lb Nkemdiche was Rebel coach Hugh Freeze's first high profile recruit, a consensus number one high school player that Freeze beat out Nick Saban (among others) to get.  Last season, Nkemdiche was a first-team freshman All-American, and is on numerous watch lists this year.  He has seven tackles in the first four games, including a sack.  His backup is senior Lavon Hooks.

Joining Nkemdiche on the D-line are Fadol Brown (end), Woodrow Hamilton (nose tackle), and C.J. Johnson (end).  The Rebels run a 4-2-5 base defense, which employs Hamilton as a nose tackle much like in ‘Bama's 3-4 front.  His role is tying up blockers and using his size (6'3", 315 lbs) to attack the offensive line.  Hamilton, a junior, is a two-year starter and future NFL prospect.  Senior Bryon Bennett and junior Isaac Gross will also see action at the nose.

Brown, a 6'4", 280-lb sophomore, is the strong-side defensive end, while C.J. Johnson (6'2", 225 lbs) plays the weak side.  In this alignment, Johnson tends to get more tackles.  He has nine already this season, including a sack and a tackle for loss, and has one of the Rebels' numerous interceptions.  Johnson is a junior, but was granted a medical redshirt for the 2013 season, after injuring his ankle in the fourth game.  Freshman Marquis Haynes and sophomore John Youngblood will spell Johnson at the weak-side end spot.

Brown's role is controlling the edge.  He had 31 tackles in 2013, but only has two so far this season.  Oddly, his backup, junior Channing Ward, actually has ten tackles and a forced fumble in the first four games, so don't expect much of a drop-off when Brown is on the sideline.

Starting at middle linebacker for Ole Miss is Decatur, Alabama-native Deterrian (D.T.) Shackelford.  A sixth-year senior, Shackelford is the first two-time recipient of the Chucky Mullins Courage Award, and wears Mullins' No. 38 jersey.  At 6'1", 247 lbs, Shackelford played linebacker and defensive end last year after missing two seasons due to knee injuries.  He leads the Rebels in tackles so far this season with 23, including two for loss and a sack.  Junior college transfer Christian Russell and freshman DeMarquis Gates are Shackelford's backups.

At the "stinger," or outside linebacker, position, are two players that really share the role.  The nominal starter is senior Serderius Bryant, a 5'9", 220-lb spark plug with sideline-to-sideline tackling ability.  He led the team in tackles last season, and he already has 2.5 tackles for loss in the first four games this year.  His partner is 5'11", 212-lb junior Denzel Nkemdiche, older brother of Robert.  He started six games at stinger last season and had a strong showing against the Tide at Bryant-Denny after returning from injury.  Although he missed spring practice and the first game against Boise State due to a disciplinary action (stemming from an arrest in February), he still has 14 tackles in 2014.  Senior Keith Lewis will also see significant snaps.  He has 15 tackles so far this season.

Defensive coordinator Dave Wommack's 4-2-5 scheme is defensive-back centric, and the Rebels have some top talent in the secondary.  Senior free safety Cody Prewitt (6'2", 217 lbs) is the best player on the Rebels' defense and rivals Alabama's Landon Collins as the best safety in the country.  A future top-15 NFL pick, Prewitt is a hard hitter with soft hands.  A first team All-American last season, he has ten interceptions in his career at Ole Miss, and is currently third on the team in tackles (17).  Two freshmen named C.J - Hampton and Moore - are his backups. 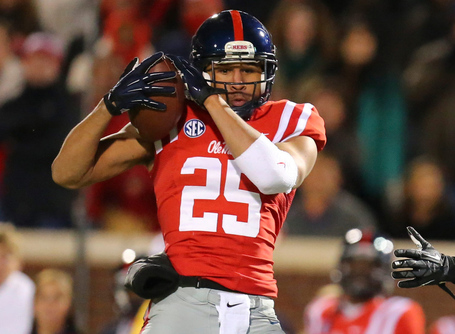 Cody Prewitt, who thinks Bama is not as good they have been.  via static.nfl.com

At the rover (strong safety) spot is junior Trae Elston (6'0", 195 lbs).  Elston also has 15 tackles and an interception.  A third-year starter, Elston hails from Oxford, Alabama.  Sophomore Anthony Alston is his backup.

Tony Conner (6'0", 217 lbs) plays the nickel corner position - called "Huskie" in the Rebels' defense.  The huskie's role is a blend between a safety and a linebacker.  A starter for every game since he arrived on campus, Conner has 15 tackles this season, including three for loss, an interception and a quarterback hurry.

The boundary corner in the 4-2-5 scheme plays the short side of the field, and is generally the best cover corner.  Mike Hilton (5'9", 182 lbs) is short, but the junior is a talented player.  In fact, he serves as Conner's backup at huskie in addition to his role as starting boundary corner. Hilton is second on the team in tackles with 22.  He also has an interception and five pass break ups.  His backup at BCB is senior Cliff Coleman.

Rounding out the Rebels' defense is senior Senquez Golson, another short corner (5'9", 176 lbs).  Golson, who played baseball in 2012 for the Rebels before concentrating solely on football, is a four-year starter at the field corner position.  Golson leads the team with three interceptions, including one he returned 59 yards for a touchdown against Louisiana-Lafayette.  Freshman Kendarius Webster is his backup.

Although Alabama has more depth, Ole Miss's starting defenders are as talented as the Tide's.  While the Rebels have been even more statistically dominating than Alabama, they've also caused six times the number of turnovers against arguably similar competition.  However, the Rebels have not faced an offense like Alabama's, which is currently averaging nearly 600 yards of offense per game.  Still, this looks to be a low-scoring affair that may hinge on mistakes by either team.  If Alabama makes the same blunders that they did against Florida (four turnovers, 11 penalties, a missed field goal), Ole Miss may pull off a rare upset.