Alabama heads to Oxford for its first real road test of this young season, and your hoodoo is needed now, more than ever.

What exactly is a Hoodoo and Worry Index? You can find out here

If you don't think hoodoo matters, and the football gods are just something we've made up, just ask Oregon fans how they feel this morning...

So get yer mind right and get to hoodoo'ing. 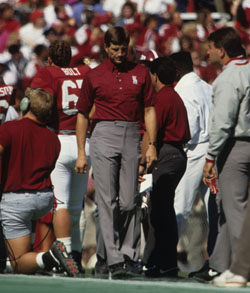 Won some games, 26 in fact, handled the also rans, but you were never really confident in the outcome, especially against Auburn. Alabama will have to bring their A-game if they have any plans on notching an X in the win column.

I would have gone with Mike Shula for this game but the man only lost one time to the Rebs (2003). Oh, by the way, that would be the last time the fighting Ackbars defeated our Crimson Tide.

So just for fun, here are some things that weren't a thing when Ole Miss last beat Alabama:

If Ole Miss has any hopes or dreams of ending this win-less streak, this year may be their best chance. But that has less to do with Alabama and more to do with Ole Miss. Meaning, Hugh Freeze has taken what was a bottom dweller and at the very least put Ole Miss in a position where they can compete with the Alabama's, LSU's, and Auburn's of the world. Make no mistake, this is not the same Houtson Nutt led Ole Miss team who was all hype and no bite.
Bo Wallace is still Bo Wallace and will forever be Bo Wallace but their defense has improved and they have play makers on offense.
Keys to Victory
Score Prediction: I'm worried, as usual, but confident that our defense will hold up against the Ole Miss HUNH long enough to allow our offense to get ahead by a couple scores. It's a tight game into the 3rd quarter but 'Bama pulls away late and gets out of Oxford with a 31-17 victory.

Roll Tide and don't forget to submit your hoodoo!