WARNING: Contents may cause dizziness, nausea, vomiting, and/or a strong desire for adult libations

Share All sharing options for: Charting the Tide, Week 6 | Ole Miss in Review

Before we get to the charting results…

…there’s something I want to talk about with respect to this team and last Saturday — the penalties, which killed drives yet again against Ole Miss. My general impression heading into the game is that we were playing very sloppy for a Saban team, with an absurd number of false starts and offensive holding calls, and what happened Saturday did very little to change that impression. Since I like hard numbers much more than I like impressions, I went back through every box score for Alabama since the start of the 2008 season* and took some notes. This is what I found:

Yeah, so, more penalties and more yardage, but specifically twice as many false starts and almost twice as many holds per game. We’ve accumulated 12 false starts this year, which is as many as we had in all of 2008 and 2012, and 3 more than we had in all of 2010. The occasional false start is to be expected, but this is getting kind of ridiculous. There’s no telling what play Lane would have dialed up if that late hold by O.J. Howard hadn’t occurred, negating a nifty scramble by Blake Sims on the penultimate play of the game. In general though, the closer you are to the goal line the better, and it’s possible the game turns out differently.

Did you know we used to have entire stretches of games in which no false starts or offensive holds were committed? Hell, the 2009 team wasn’t flagged for a single offensive holding call after the South Carolina game that year — 7 straight games. In all fairness, historically the line seems to be more penalty-prone earlier in the season, evening out later in the year. I guess I would have expected that to happen over the bye week, but instead we saw 3 false starts and an offensive hold on Saturday. The season’s far from over, and this is certainly not the only issue we’ve got right now, but if we want to go anywhere worthwhile at the end of the year, this one has got to be fixed now.

Now that the rant’s over, on to the download. You’ll note there’s a lot more here than there was last week, and shrewd observers will see that some of the numbers may look a little different. The main thing is I pulled in garbage time***, so the information below only reflects non-garbage possessions. I also fixed all of the row leaders to accurately reflect what was being tabulated (you saw things like 5 – 10, 10 – 15 last week, but it should have been 5 – 10, 11 – 15, etc.), and some other minor reorganizations.

Now, this part is very important. You’ll see there is a very large amount of information presented below. I can certainly generate all this stuff every week, but I’m not going to make such an eye-melting article if you don’t actually want to see some of this. I’ve got every section**** listed in a poll at the bottom of the article — I humbly request that you read and then vote. If there’s something that literally nobody wants to see, it wont be here next week. Thank you!

**** The Blake Sims Map of Quarterbacking Excellence is exempt, obviously. 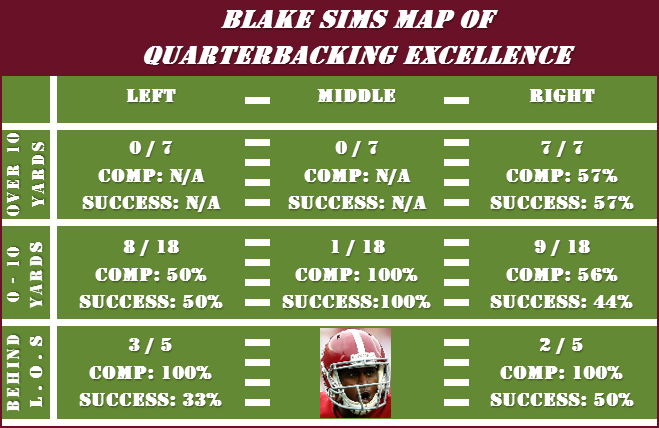 Unless something dramatic changes, passing down splits will be based on Blake Sims throughout the rest of the year. Also, the Blake Sims Map of Quarterbacking Excellence will be generated on a game-by-game basis; we’ll check in with season-long results at the next bye week and before the postseason.

From the map, we can see a pretty big slant toward the right hand side – we didn’t try the deep left or middle at all. There didn’t seem to be a particular part of the field that was ripe for exploitation in this one, as the success rates are all around 50% in the blocks Blake threw to often.

We found a little more success on first down throws (and a little less on third down ones), but we were significantly less effective on second down than the season average. We also threw more often than usual on this down, so I suspect we’ll see later on our overall first down success rate was down, leading to more second and longs.

As with the passing splits, success rates are down across the board, regardless of where we headed. There was a slight shift to the left side (likely a result of that one drive where we ran to the left on just about every play of the drive), but most of the directional distribution was in line with season averages. You’ll note we ran less frequently on second down, which again makes me think our first down numbers aren’t going to look pretty here in a minute.

Yeah, pretty much. We had less first downs in favor of more third downs, and our success rates were down across the board, leading to more downs with long yardage to go. In particular, much less successful with over 10 yards to go, probably as a result of the 3rd and 15s, 3rd and 20s we had due to penalties. Really hard to pick those up.

We did a lot of funky stuff this week. We ran a lot of stuff out of the I, and I’m pretty sure we even ran stuff out of the T a handful of times, which is pretty odd. Of the formation types the Charting Project tracks, you can see we ran very little pistol this week — only three plays total, and none of them worked.

In what’s becoming a theme today, success rate’s pretty much down across the board here too. Guess that’s what happens when you play a really good team. One interesting note is that we got absolutely stoned when running sets with no wide receivers, which are typically short-yardage/goal-line packages. Success rate in those situations was almost 40% lower, which is an enormous drop. The main takeaway here is that Ole Miss’s defense was as advertised. Unless something dramatic happens to the state of Mississippi, the Egg Bowl should be a hell of a game this year.

This section looks a lot different from last week – remember, garbage time possessions are not included, which is why DeAndrew White moved ahead of Christion Jones despite barely playing last Saturday. You’ll also note the debut of O.J. Howard, who saw a lot more action against Ole Miss. He was a matchup nightmare (as he should be), getting wide open several times, including a 53 yard catch-and-run that was the most explosive play for the offense on the day. He also dropped 3 of his 6 targets, most notably the ball that Senquez Golson intercepted to ice the game for Ole Miss. I didn’t track any of this stuff last year, but I am beginning to wonder if Mr. Howard has a hands issue, and that’s why he wasn’t as involved until now. Who knows.

Hey look, something we actually did better than normal! Too bad it’s something we only see 6% of the time! Ole Miss didn’t exactly have their way with us, but they were more successful pretty much across the board compared to our other opponents. Notably, they posted a success rate 10% higher than our average when running the no huddle, which is not surprising. Alabama does not have issues against the HUNH, but we do have issues against good teams running the HUNH, and 2014 Ole Miss falls squarely in that category.

One thing I will mention here is my very favorite defensive play of the game, which was a wildcat look they threw at us late in the 4th quarter. In a clear instance of Freeze outfoxing himself, he pulled a red-hot Bo Wallace and brought in Jeremy Liggins, the blocking tight end they use as a wildcat QB. Instead of, oh, I don’t know, running your 300 pound batting ram up the middle, Freeze decided to roll him out to the right, trying to run some kind of a pass to the flat. Shockingly, it didn’t work, and Reggie Ragland picked up a sack. Unfortunately Ole Miss ended up scoring the winning points to finish that drive, but this was still highly entertaining.

Yeah, Good Bo definitely showed up. That would be perfect success on the longer intermediate throws. Not necessarily a first down each time, but at least getting what Ole Miss needed to stay on track. Ole Miss also lit us up in the short passing game, posting a success rate 30% higher than our average on routes under 5 yards. I was surprised the third down numbers were so pedestrian (still better than what we typically give up, but pedestrian), it seemed to me watching the game like they couldn’t miss on third down throws. That’s why you run the numbers!

We got totally gashed on third down runs, which tells me Ole Miss saw a lot of 3rd and shorts, which tells me the next chart’s going to say their first and second down success rates were pretty high. In what may be the oddest result in this article, Ole Miss’s run distribution was perfectly symmetrical, with 6 runs to the left, 5 up the middle, and 6 to the right. They were pretty successful running up the gut on us too, which is disconcerting. We apparently continue to be impenetrable to left tackle runs; I suggest someone phone up Kirby and tell him to funnel everything to those gaps from now on.

We were actually pretty stout on first downs, but they made that back on second downs, and had more success on third downs as a result. The distance distribution is about in line with season averages, but Ole Miss was basically just more successful regardless of the situation. Short yardage in particular was bad, as they were successful all 4 times that came up.

I added blocked kicks, so we could give A’Shawn some love. The broadcasters couldn’t quite get there, but Mr. Robinson blocked the extra point that would have been the biggest play in the game if O.J. Howard had caught that last ball.

This hasn’t been talked about much, but Jarran Reed has been kind of a beast this year. He’s doing his best J.J. Watt impersonation, leading the team in passes defensed as a defensive lineman. Cyrus Jones also had a big game, collecting 2 pass break-ups and a huge, huge forced fumble that shouldn’t have counted, but would have ultimately proved the deciding points if, again, O.J. Howard had caught that last ball.

Anything else you feel is worth noting from these charts? Don’t forget to vote in the poll! And, of course, if all of the above wasn't enough for you, by all means let me know if there's something else you'd like to see!