It's probably going to hurt.

Share All sharing options for: RBR Previews the Arkansas Offense

Once upon a time, I was an offensive lineman at Opelika High School.

("That explains a lot," says the chorus.)

I spent four years playing for the great Spence McCracken, one of those sentences I wish I could put on my resume. I suppose you can, technically, put something like that on a resume, but it seems unlikely to get you anywhere.

In any case, Opelika has a number of longstanding rivalry games, including Auburn, Central-Phenix City, Benjamin Russell and Smiths Station. It's possible to rank those rivalries in terms of importance, though it usually changes by the year.

On the list of "teams everybody hates playing," however, Valley High always ranked at or near the top.

It certainly wasn't due to talent. Valley High does boast a long tradition of quality football and football players, but most years Opelika fielded a deeper, more talented squad.

No, everybody hated playing Valley because, for years and years, the Rams employed something called the "Ram bone," a full house wishbone backfield, out of which they more or less ran 3 plays (blast right, blast left, fullback dive). They were big, they were mean and they had very little imagination. Playing against them was hell on earth for Opelika, a program built around its speed (we were state track champs several times over but wouldn't have won any titles for size).

All that to say, this week's trip to Arkansas is a familiar sort of nightmare*. In their second year of Bret Bielema, the Hogs have firmly established themselves in the following category: We're going to smash you, and you may win, but you will not be happy tomorrow.

* - In something of a funny twist, my old alma mater is actually traveling to play Valley this Friday night. I have no idea if they're still running the bone up there.

Previewing the offense is as simple as it is maddening. 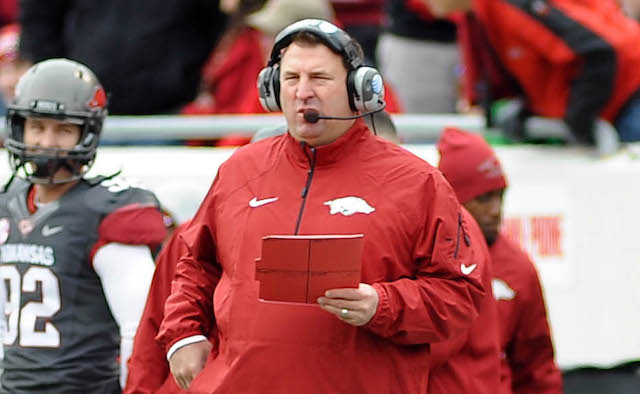 When he introduces his split veer offense in Remember the Titans, Denzel Washington's version of head coach Herman Boone* says that it's "like novocaine - takes time, but it always works." It's an oversimplification to say Bielema's offense is the modern version of that (or the Ram bone, for that matter), but the principles he applied at Arkansas - which he brought with him from Wisconsin, where he was an assistant to head coach Barry Alvarez before taking the top job in 2006, when his boss retired - are the same. It's what many on the internet derisively call "man ball" - run it straight at them, and make them prove they can stop it.

* - If you really want your illusions in life shattered, read the Deadspin piece on Titans from about a month ago. You mean to tell me a movie that ends with a double reverse on the last play of the state championship game stretched the truth?! Say it ain't so.

That approach hasn't been good enough to break through and win a game in the SEC in a little over a season in Fayetteville. Bielema, to his credit, believes in it and has yet to change a thing.

We can argue to the death, of course, about whether Bielema should spend so much time running his yap about hurry-up offenses, or whether the rule changes that he has openly endorsed would be bad for football. We can argue about those things next week. 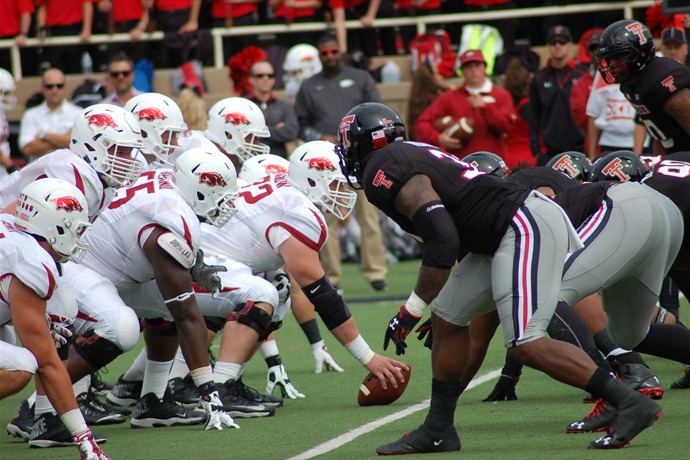 Normally, these previews begin with the quarterback and involve some sort of brief discussion about skill positions. You can argue that's because I'm lazy and not inspired enough to break out of my formula, and you're probably right.

My laziness aside, though, no proper assessment of the Hogs' offensive line can begin anywhere but up front, where Arkansas fields a group that averages 325 pounds, and (unless I'm mistaken) no starter weighs less than 300.

It shows in the run game statistics, too - Arkansas tailbacks Alex Collins and Jonathan Williams currently average 7.2 and 7.4 yards per carry, respectively, and as a team the Hogs average over 316 yards on the ground. In their most recent outing, Arkansas rushed 47 times for over 6.1 yards per carry, grinding out 285 total yards in a game they really should have won. Oh, and thus far quarterback Brandon Allen has only been sacked once, for a loss of 7.

So, the prevailing theory is that if Arkansas can figure out how to throw the football in any meaningful way, it's a team with scary potential. That falls on the junior, who is thus far completing just over 59 percent of his throws, for just over 150 yards per game and nine touchdowns. It's hardly eye popping stuff; for what it's worth, Allen turned in his best game last Saturday vs. the Aggies, completing 15-of-27 for 199 (7.4 per attempt) and a touchdown.

He is not bereft of weapons on the outside, either - specifically, wideout Keon Hatcher currently boasts an average of over 17 yards per catch, and has two touchdowns to his name.

Like Alabama, Arkansas also makes use of its tight ends as receiving threats - senior A.J. Derby has two touchdown catches this season, and sophomore Hunter Henry is averaging over 11 yards per catch, with a score.

Really, there is no mystery to the mission this week for Alabama on defense: Stop the run, and be prepared for the opponent to take shots down the field off play-action in the passing game. Alabama's is still one of the better defenses in the country vs. the run (ranking third nationally), but this style of downhill offense behind this offensive line - not to mention a week after a grueling game at Ole Miss - is always a cause for concern.

You may beat this team, after all, but you'll definitely feel it in the morning. Hope for the best (and some Tylenol).