It wasn't pretty, but two special drives at the end of the game got it done.

The overall stats for the offense are going to be kind of putrid, but you all know the reason why. That was two awesome defenses crushing it for 4+ quarters, and it was as beautiful as it was life-shortening. It’s true a not-insignificant portion of the Tide’s offensive struggles were due to its own poor play, but credit the LSU defense for not making it an easy task.

If I might take a moment to gump out here — I am just so damn proud of what this team did at the end of the 4th and in overtime. To be in that kind of situation, down 3 with 50 seconds left on the road, after a backbreaking fumble deep in your own territory due to an injury to your star tailback. All hope is lost, every preseason goal is toast, the works. To have the mental fortitude to maintain composure and just get it done, just about brings a tear to your eye. It’s a credit to the coaching staff for preparing the guys to perform in that kind of situation, but it’s an even bigger credit to the guys for pulling it off. Here's what Les thought about the whole thing:

This may be my bias talking, but that wasn’t luck1. There was no once-in-a-lifetime tip of the ball, no lack of coverage on a missed field goal return. No fortuitous referee interventions2, or whatever you want to call what happened to Laquon Treadwell. That is how you find a way3.

1 | Okay, the kickoff out-of-bounds was maybe kind of lucky.

2 | Okay, the personal foul on Vadal Alexander was maybe kind of fortuitous.

3 | Three guesses on which team I’m referring to here.

Just in case it wasn’t clear how different the offense was in that time frame versus the rest of the game, I offer the following:

Stunning. Granted, there’s a pile of caveats here, but that’s a pretty big leap in performance. Oddly enough, not much improvement in terms of yards per carry, but at a 100% success rate you can’t really complain. The Tide finally managed to string some pass plays together, and the end result was a win. Great game.

This play4 really ticked me off. You know why? LSU robbed the Tide faithful of the best fat guy touchdown in the history of fat guy touchdowns5. In all seriousness, what a ballsy playcall by Kiffin and great execution by the offense. As Glen noted in From the Couch, the best part was how the big fella protected the ball at the end of the play. That very easily could have become a turnover given Mr. Greene’s lack of experience carrying the ball. Perhaps the most impressive thing about the play to me, however, was the LSU defense recovering to prevent a touchdown. I thought Greene was headed in for sure (dragging a defensive back for good measure), but Danielle Hunter6 streaked in, squared up between Greene and the end zone, and just stoned it. Watch it again and consider that is 300 rolling pounds of hot, festering death he stopped there. More impressive than you thought, isn’t it?

4 | A fine breakdown of this play is available over at the mothership.

5 | As a former lineman, I love fat guy touchdowns. Scored one myself once upon a time.

6 | Can’t say I rigorously charted his performance or anything, but this guy was a beast on Saturday.
I counted three PBUs (for an end!), the aforementioned stop — several big plays.

Last week, I requested you vote on the format of this series, and 125 of you did just that. Very few of you wanted to stay with one article, so this series will be split into an offensive and defensive review moving forward. Thank you for the feedback!

Also last week we had a rousing discussion going on in the comments about the pass direction statistics, and I spoke with Bill C. about that last week. I’ve been advised to continue charting as I have been (direction relative to the hash, as opposed to section of the field), but this will change next year. Without getting in to too much detail, it’s been determined that the instructions for this portion of the project were insufficient, and the designations for pass direction in the charting spreadsheet were not clear, and that will all be rectified by next year.

So, just to clarify once more, for the time being "Left" means the quarterback threw to his left, not necessarily that he threw to a portion of the field left of the left hash – the equivalent applies for "Right". "Middle" means the quarterback threw it more or less along the down-the-field line defined by the ball placement at the snap (hashmarks for balls snapped from the left or right hash, and an equivalent line for balls snapped from the middle). 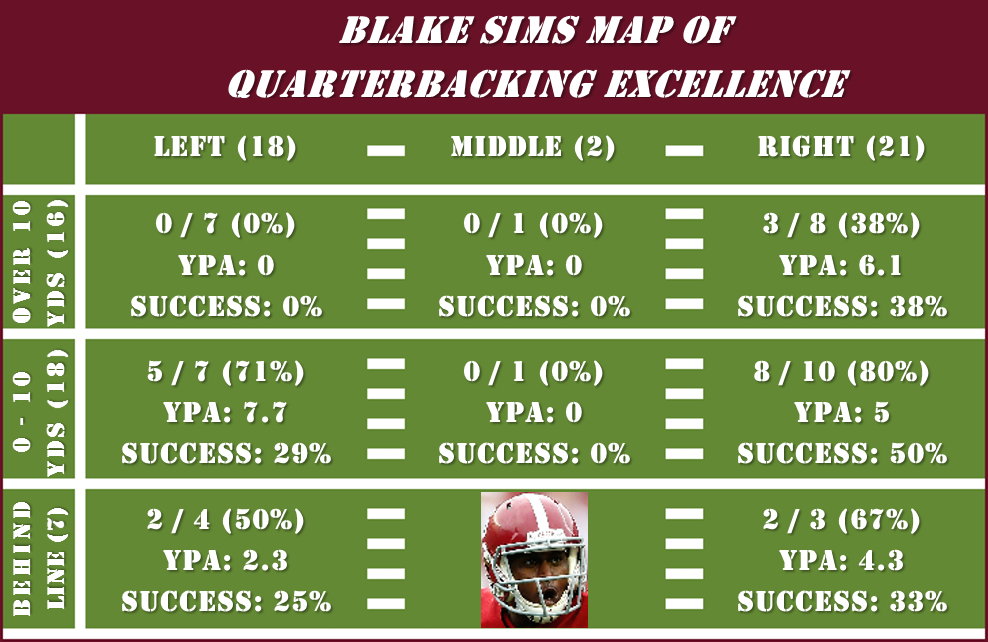 Note: This graphic was updated from the original posting to fix transcription errors.

Not the best effort from Blake Sims. We knew going in the LSU secondary was going to give this team fits (and they did – I logged 5 PBUs and two forced throwaways), but a good bit was on Sims and the receivers. Several dropped passes and several puzzling overthrows resulted in the Map of Excellence looking more like the Map of Mediocrity. The only real success was found between the line of scrimmage and ten yards downfield7, where Sims was 13/18 and averaged 8.1 yards per attempt. Just not a good outing at all.

7 | Danielson keeps trying to steal the stats community's thunder on these broadcasts, and I’m tired of it.
AIR YARDS ARE OUR THING MAN, GET OFF MY TV. GO BACK TO PURDUE.

The down chart is pretty telling — the Tide threw a bunch in this game. This seems odd, given the reputation of the LSU secondary, but LSU seemingly stacked the box on almost every play. I read on one of the game threads someone’s theory that most of the playcalls were packaged plays and Sims elected to throw, which seems plausible. At any rate, several pass attempts were made, regardless of down, and none of it worked. Abysmal success rates regardless of situation.

Corresponding to the passing numbers, the Tide didn’t run too much in this game, and when they did it wasn’t particularly successful either. The lone exception is third down runs, which the Tide converted at an 80% clip — except all of those came on the last two drives of the game, when the Tide went into Juggernaut Mode8.

8 | I think this should be an officially adopted term for when this team flips the switch and starts dominating.

Kiffin is apparently reading the column, because he finally decided to just run it right down LSU’s throat. Of course, this week it didn’t work too well, with that being the least successful run direction of all. Three of the four designed runs on the last two drives of the game also went up the middle, so those numbers were even worse for most of the game. Interestingly enough, when the Tide ran in the direction of the hobbled Cam Robinson, good things happened — 67% success rate is nothing to sneeze at9.

Nothing too shocking here given the previous charts. The Tide found themselves in longer distances and later downs more often than usual, which is a pretty good indicator your offense isn’t moving the ball. Success rates were down across the board. Of particular note is the awful 33% rate put up in short yardage. Kinda hard to pick up third downs when you can’t move the ball a couple of yards when you need to.

Lots and lots and lots of shotgun this game, a full 30% higher than the season average. The only alignment the Tide were somewhat successful in was the Pistol, which Kiffin only kind of toyed around with yet again. Although, at this stage, those success rates are starting to collapse a bit to about 48-50%, indicating it doesn’t really matter where Sims lines up.

We saw a bit more two-back in this game than in the last few, but still low for the season. Nothing else really to note from the back chart.

Finally, something interesting. Kiffin went 3 and 4 wides very often in this game, and it Didn’t Work. This came at the expense of 2 wide sets, which were comparatively pretty effective. No idea why that is, and before you ask, no it wasn’t the last two drives — those were mostly 3+ receiver sets.

Coop had kind of a rough game. 17 targets, only 8 catches. Not all of those were his fault, of course, but still not up to his lofty standards. One notable result from this week was the triumphant return of Christion Jones, who saw his first non-garbage targets since the Ole Miss game and made perhaps the biggest catch of the game to set up the tying field goal at the end of regulation. I’m beginning to wonder if Yeldon is nursing some sort of hand injury in addition to his lower leg woes, as his catch rate has plummeted from earlier in the season.

Normally there are only 5 rows here, but Brandon Greene deserves some additional recognition for his effort on that play. The sixth row of this chart will remain through the end of the season, and it will be occupied solely by Mr. Greene.

As usual, if I missed anything, please publicly shame me in the comments.