College Football Random Thoughts From Around the Country: Week 12

Share All sharing options for: College Football Random Thoughts From Around the Country: Week 12

The College Football Playoff Committee (CFPC) has released their fourth rankings and look at who is back on top.

If you heard a faint squealing sound in the distance, that was all the SEC-haters crying their little eyes out that two SEC teams are in the Top 4. A large amount of wackiness would have to happen for these four to change much. So for the time being, we will focus on the Top 10. Anything below that has little to no shot. 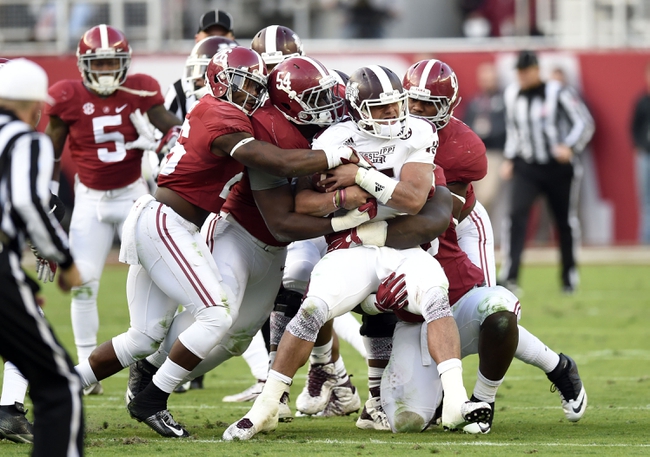 Auburn and LSU lose their second in a row. Florida loses a coach. UGA loses a tailback. Kentucky is losing hope. And Arky gets an SEC win.

Alabama 25 Mississippi State 20 - Blake Sims works his home team magic and the defense looks like... well, an Alabama defense.
Georgia 34 Auburn 7 - Todd Gurley makes his big return and big exit in the same game. Why Mark Richt felt the need to run him 29 times (138 yds) is beyond me. Nick Chubb was much more succesful on 10 less carries (144 yds). Auburn could manage only 292 total yards on a Bulldogs defense that gave up 445 to Florida two weeks before.
South Carolina 23 Florida 20 (OT) - The Gators loss was the final nail in coach Will Muschamp's coffin as he was let go this week (he will finish out the regular season). A blocked punt and a blocked field goal were ingredients that made up an overtime loss for Florida.
Arkansas 17 LSU 0 - Arkansas ended a 17-SEC game losing streak at the hands of a lethargic LSU team that managed only 123 total yards. Leonard Fournette had 9 yards on four carries.
Tennessee 50 Kentucky 16 - Joshua Dobbs has Vols fans wondering why Butch Jones wanted to redshirt the sophomore quarterback this season. He threw for 297 yards and three touchdowns. The Wildcats have lost five in a row after starting the season 5-1. The 'Cats have one more chance (Nov. 29 at Louisville) to gain bowl eligibility.
Missouri 34 Texas A&M 27 - Russell Hansbrough rallies Mizzou past the Aggies with a career-high 199 yards and two touchdowns.

Technically, UGA and Ole Miss are still in the chase but some wild & crazy things would have to happen.

Could my little scenario come true? Georgia Tech has finished out their ACC Conference schedule with a 6-2 record. If Duke loses to either North Carolina or Wake Forest, the Yellow Jackets win the Coastal Division. My point to all this is that 1) who wants to see FSU slobberknock Duke again? 2) Tech's triple option could possibly give the Seminoles some trouble.

Georgia Tech 28 Clemson 6 - Tech had three interceptions and returned two of them for touchdowns. Stick a fork in Clemson. They are done.
Virginia Tech 17 Duke 16 - Duke entered the game with six turnovers on the season and exited with nine. The Hokies converted the turnovers into enough points to get the road W.
Florida State 30 Miami (FL) 26 - FSU's strategy is to flop around and wait for the other team to play conservative-run-out-the-clock football.

The Pac-12 looks like a one horse race. Oregon had a bye but still won. Go ahead and engrave Pac-12 the trophy.

Oregon State 35 Arizona State 27 - Late in the deep dark night while most of the nation slept, the Beavers had their way with the #6 Sun Devils. Most figured Arizona State would go on to face the Ducks in the Pac-12 Championship Game. But lo and behold, it is the Southern Cal Trojans who now lead the South Division. UCLA lurks in the shadows.

Ohio State is back in the driver's seat but it just got REAL interesting after Wisconsin's Melvin Gordon ran past Nebraska.

Ohio State 31 Minnesota 24 - The Buckeyes controlled most of this game and let Minny score 10 late points to make it look closer than it was. Quarterback J.T. Barrett is making OSU fans forget ol' Braxton what's-his-name.
Wisconsin 59 Nebraska 24 - The Badgers' Melvin Gordon rushed for 408 yards and four touchdowns. He probably could've gone for 500 but he sat out the fourth quarter. The 'Huskers looked like they had no interest in being in snowy Madison and just plain quit. Wisky finishes at Iowa and home vs. Minnesota. Win those and they win the West division.

As said before, the absence of a championship game hurts this conference.

TCU 34 Kansas 30 - The Frogs trailed most of the game against the lowly Jayhawks (3-7). In this situation, a win was a loss as TCU falls behind.
Baylor had a bye.

Northwestern 43 Notre Dame 40 (OT) - HAHA
South Alabama 24 Texas State 20 - The Jaguars are bowl eligible but they may have to win more than 6 games to get a bid somewhere.

West Virginia (6-4) had a bye.
Southern Miss and FAU! are not much help as both are terrible.
Western Carolina is 7-4 in FCS play.

53 teams are bowl eligible for a laughable 76 bowl openings. This group now includes Penn State who had their bowl ban lifted by the wimps at the NCAA.

Kansas, Indiana, and Texas Tech are among the teams joining the 7-loss club.

Attendance will be counted by hand this one. pic.twitter.com/CCYgPMCc0P

Krazy Kristi's "SHUT UP!" of the Week goes to Notre Dame AGAIN! and Auburn. Buh-bye.

There are games on all these days but only two of any significance.

- Duke fighting for their lives.

Not a great week for channel flipping:

- Tune in to see which running back Mark Richt will run into the ground next!
Eastern Kentucky at Florida 11:00am CT / 12:00pm ET - SEC Network*

- The penultimate chapter of Will Muschamp's story at the Swamp.
South Alabama at South Carolina 11:00am CT / 12:00pm ET - ESPN3

- Vols open as a 3 point favorite.

Some real dogs and one rivalry game.

- Odd that they would play this storied rivalry in mid-November.