College Football Random Thoughts From Around the Country: Week 13

Share All sharing options for: College Football Random Thoughts From Around the Country: Week 13

The College Football Playoff Committee (CFPC) has released their fifth rankings with the top seven staying the same:

It was not the most glamorous of weekends for the SEC. Two teams are on a hot streak. Two fan bases are gathering up pitchforks and torches.

Missouri 29 Tennessee 21 - The Vols could only muster 279 total yards against Mizzou's stingy defense with 53 on the ground. Joshua Dobbs was 24 of 37 but had only 195 yards - a 5.3 yards per completion average.
Arkansas 30 Ole Miss 0 - Speaking of defense, Nick Saban would appreciate this Hogs effort because they made the Rebels a** quit. Bo Wallace was dreadful with two fumbles and two picks. It's amazing how bad this team has become.

A few weeks ago, I posited in this space that if somehow Georgia Tech could win out their ACC Conference schedule and if Duke loses the next two (Virginia Tech, North Carolina), then the Yellow Jackets win the Coastal Division. From my keyboard to the football gods' eyes, it happened. Now the final portion of this scenario is for the Ga Tech triple option to give the Seminoles suspect defense some fits, FSU takes an L, and you-know-who goes away.

North Carolina 45 Duke 20 - The Tar Heels scored 21 points off Duke's three turnovers. Duke could only managed 378 total yards against a defense that allows an ACC-worst 512 per game.
Florida State 20 Boston College 17 - BC missed a go-ahead field goal. FSU did not.

If UCLA beats Stanford on Friday, they will lock up the South and force a rematch with the Ducks in the Pac-12 championship game. If the Cardinal beat the Bruins, then it's winner take all in the Arizona-Arizona State game.

UCLA 38 Southern Cal 20 - UCLA QB Brett Hundley had a big game passing (326 yds, 3 TD) but was also responsible for the Bruins' two turnovers. The defense limited the Trojans to 276 total yards.
Oregon 44 Colorado 10 - Nothing to see here. Move along.

Ohio State and Wisconsin are on a collision course for the conference title. The Badgers host Minnesota on Saturday, Nov. 29, with the winner representing the West Division in the title game against the Buckeyes.

Ohio State 42 Indiana 27 - An unimpressive showing for the Urban Meyer's team as they linger on the bubble. OSU finally woke up after entering the fourth quarter with a one point lead.
Wisconsin 26 Iowa 24 - Iowa (7-4) put up a good fight at home but Wisky's Melvin Gordon was just too much for the Hawkeyes.
Minnesota 28 Nebraska 24 - Coach Jerry Kill - HOT. Bo Pelini - not.

There is not much left on the schedule for either of these teams to impress anyone. How epic would a championship game between these two be?

Baylor 49 Oklahoma State 28 - The Bears dialed up 579 yards on the fading Cowpokes (5-6). This might be a good time for OSU coach Mike Gundy to take a better job.
TCU had a bye. 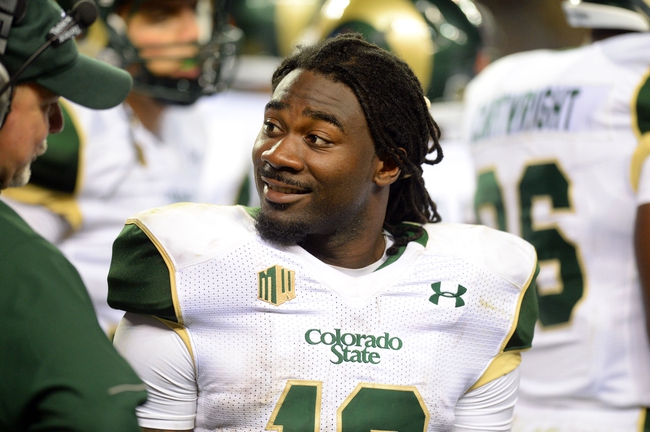 Colorado State 58 New Mexico 20 -  Dee Hart matched a school record with six touchdowns to go with 230 rushing yards. Jim McElwain has the Rams at 10-1.
BYU 64 Savannah State 0 - Every year these guys play some FBS team and every year they get plowed into the ground. Are the paychecks really worth it? What are they doing with all that money?
Maryland 23 Michigan 16 - The final days of Brady Hoke in Ann Arbor have been humiliating.
Kansas State 26 West Virginia 20 - Things have gone downhill fast for the Mountaineers ever since blowing a 13-point lead against TCU on November 1st. They are hoping a trip to Iowa State will end their three-game losing streak.
Louisville 31 Notre Dame 28 - The Irish miss a 32-yard field goal with 51 seconds left to suffer their third straight loss.
Wake Forest 6 Virginia Tech 3 (2OT) Lamest Game of the Week Award has been snatched away from the Big Ten's grasp as these two teams dragged their arses around to a 0-0 tie after four quarters. They exchanged field goals in the first OT. In the second OT, Virginia Tech lost 4 yards, had a 5 yard pass completion, but a sack pushed them back again. A 53-yard field goal was wide left. Wake's 39-yarder was the difference. Both teams punted 9 times each. Did I mention that this Hokie team won at Ohio State?

Many teams had sloppy lackluster wins over inferior opponents but no eliminations this week unless you count Ole Miss' longshot hopes.

73 teams are now bowl eligible for a preposterous 76 bowl openings. 18 teams need one more win to get to 6 wins and bowl eligibility including Tennessee, Kentucky, Michigan, and UAB.

Krazy Kristi's "SHUT UP!" of the Week goes to Ole Miss WAOM. (I almost feel sorry for them and then I remember the post-game celebration.)

It's Rivalry Week with many great and long-running rivals facing off, mostly involving the SEC:

- Could LSU lose three in a row for the first time under Les Miles?
TCU at Texas 07:30pm - FOX Sports 1 - Could this game be a changing of the guard or is this short-lived circumstances in the Lone Star State?

- Word is that this game will become a permanent cross-division rivalry game.
Stanford at UCLA 2:30pm CT / 3:30pm ET - ABC

- The Battle of the Palmetto State. SC has won 5 straight. Is this Spurrier's last regular season game.
Kentucky at Louisville 11:00am CT / 12:00pm ET - ESPN2

- Gators would love to send Will Muschamp out on a high note. They are not alone.
Mississippi State at Ole Miss 2:30pm CT / 3:30pm ET - CBS