This guy yelled a lot, but it didn't really matter

Going into this game I was wondering how in the world I was going to write this article, as I was fairly certain the contest would be done by the end of the first quarter. Instead of the 28-0 score I was expecting at the start of the second, we got a 3 point Tide lead over lowly Western Carolina. The reason, of course, was the officiating.

First, an errant whistle erased a great forced fumble by Eddie Jackson1 on the first series of the game. Then, some sort of sudden-onset blindness afflicted the back judge on the first pass after said non-fumble, as one of the worst push-offs you’ll ever see produced a 21 yard gain for the Catamounts. This situation got worse before it got better, as we were also treated to a touchdown catch where the receiver didn’t catch the ball, as well as a fairly dubious late hit penalty on Trey DePriest.

1 | The best part about this idiotic rule is it doesn’t apply here, and I can do whatever I want. TAKE THAT, NCAA.

After the aforementioned non-touchdown brought the score to 17-14, the Tide defense clamped down, and largely shut Western Carolina down for the remainder of the game. The best part about this little FCS uprising is I got a whole half of football to talk about, instead of the 20 or so plays I was expecting. You get everything all in one shot for this game, as Crimson Tide sports as a whole have a lot going on this week. 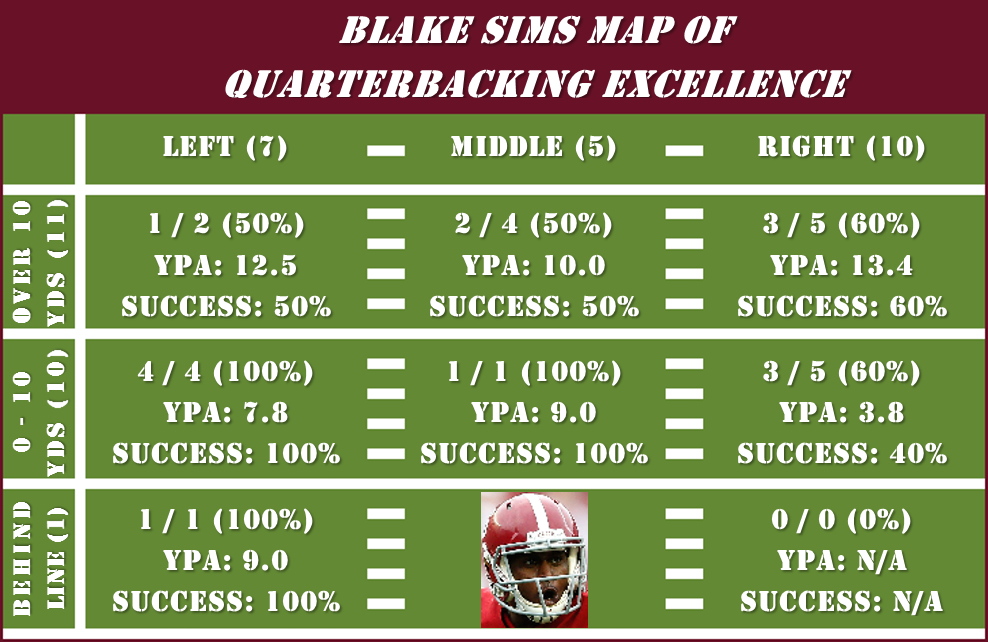 The numbers say Blake Sims had a pretty good week. Outside of a disappointing game when throwing intermediate routes to the right, every block Sims threw to had a success rate 50% or higher. Of particular note was the increase of attempts down the middle, an area Sims threw to 5 times with 3 completions for 29 yards. Part of this is the (current) definition of “Middle” for the Charting Project, as for most games we only see maybe one attempt in this area.

I qualified the previous paragraph with “the numbers” for a damn good reason — Blake Sims actually had a pretty mediocre week, but was bailed out on several occasions by his receivers. Numerous misfired balls were snagged by the likes of ArDarius Stewart2, Cam Sims, and Chris Black, and if not for their efforts this chart may have looked a bit different this week. The future looks bright at this position, as all three receivers impressed on the day, particularly Black’s 101 yards on just 6 receptions.

2 | Who also had an outstanding game before his injury: 5 catches on 7 targets, 51 yards, and a whole lot of athleticism.

This team effort resulted in higher than usual success rates for the Tide in this one, despite the absence of leading receivers DeAndrew White and (after the first drive of the game) Amari Cooper. It should be noted that is not terribly surprising given the quality of the opponent. Alabama picked up all three third down attempts in the first half, continuing their strong play on this down for the season.

The quality of opponent caveat shows up here again, as the running game was a good bit more successful overall than it has been, despite the absence of the incomparable T.J. Yeldon. The Tide ran a little less on first downs than usual, but at a slightly higher success rate. That 89% in the second down row kinda jumps out at you, we haven’t seen something that high from the run game much this year. The goose egg right below it is troublesome, although the Tide picked up its only two fourth down conversions of the afternoon to compensate.

The distribution of directions was pretty symmetric, and success rates were pretty high across the board. The exception, as it typically is, were runs in the general vicinity of Arie Kouandjio. Numbers and eyeballs don’t always line up, but in this case it appears as though Kouandjio’s strength is not as a road grader.

In general, you had to be pleased with the effort in this area for the Tide last Saturday, FCS or not. If you read my stuff regularly you’ll know I’m a big Tyren Jones fan, so I was happy he got to see some carries. Altee Tenpenny did some good work in garbage time as well, and it’s great they are both getting some carries this year. Yeldon is almost surely gone after the season, and with some uncertainty as to what Kenyan Drake will be in his return from injury, the Tide will need options to pair with Henry next year.

You might have heard that the Tide set a school record against the Catamounts with 36 first downs in the game. Well, 233 of those came in the first half, and you can see why. First and second down success rates were over season averages, most notably the 20% bump on second downs. The third down rate — while still pretty solid — was a little below the Tide’s pace for the year, but as noted was offset somewhat by the Tide going 2/2 on fourth down. Another way to look at this is the frequency of first down attempts, which was 7% higher than normal for the Tide.

Another product of early success is shorter downs, and the Tide found themselves in short yardage 18% of the time, a bit higher than the norm. Success rates were pretty high regardless of distance, with only the short yardage one falling beneath the 2014 average. Even then, 3% is nothing to get worked up over. Overall, a very strong performance from the Tide against a lesser foe.

The Tide only went out of the Pistol4 once that I saw, and it didn’t work. Shotgun worked really well though, posting a success rate 13% higher than usual, while plays from under center were right on schedule. Kiffin dialed up play action passes 7 times in the first half, almost twice as frequent as usual, despite their relative ineffectiveness.

4 | THIS USUALLY WORKS, LANE. RUN IT UP THE GUT, LANE. MAKE THEIR ASSES QUIT, LANE.

The backs chart is pretty interesting, I don’t recall a game being quite this lopsided. The Tide went single setback 84% of the time, only trotting a second back out 8 times during the half. Those plays were not particularly successful though, posting a success rate nearly half the season average. Aside from running 3 wide receiver sets a little more frequently than usual, not too much to take away from the receivers chart.

Cooper went out of the game fairly early as noted, but still managed to go two for three on that single drive. Two of the usual suspects (White, Yeldon) didn’t suit up for this one, and Howard and Jones were used sparingly. A majority of targets went to Stewart, Sims, and Black, with Robert Foster and Raheem Falkins getting a few looks as well.

The Catamounts are another one of those unimaginative hurry-up teams that run the same formation over and over and over, trading simplicity for the ability to go fast. Their approach of choice on the afternoon: No-Huddle shotgun with either 11 or 10 personnel. They ran a few two back sets as well, but for the most part they kept it pretty simple.

Oh, also, it didn’t really work. 29% success rate for the day is not something to write home about. One thing I thought was kind of odd was the frequency of play-action the Tide saw out of the Catamounts, who went that route 17% more often than the Tide’s used to seeing on the season. Correct me if I’m wrong, but for play-action to be successful you kind of need the run threat to be there, and it most assuredly was not present in this game, as we’ll see in a bit.

Western Carolina threw the ball A LOT. 75% of their plays from the first half were of the aerial variety, and it wasn’t much different in the second. The main reason, as you’ll see shortly, is they couldn’t run the ball if their lives depended on it against the nation’s finest rush defense.

The Tide did a pretty solid job outside of being a bit soft on first down throws (allowing 10% more success on those than usual) and continued softness on longer intermediate throws5. Western Carolina tried to go short on the Tide, choosing routes under 5 yards about half of the time, and were a little more successful than the typical Alabama opponent at these distances.

5 | To be fair, one of those was the aforementioned blatant pushoff, which if disallowed would bring the success rate to… 33%. Small sample size!

I understand that this is an FCS opponent, but I still chuckled filling out this table. Not a single successful rushing play against the first stringers. You’ve all heard by now that the Catamounts managed just -8 yards rushing for the game, and even when taking out the -29 yards due to sacks, you’re still talking a paltry 21 yards. Well, they managed to get 14 of those in the first half, with a long gain of 4. Just a whole lot of nothin’.

The Tide were back to their old tricks on third down in this one, holding the Catamounts to just 25% success rate on those downs, about 11% lower than normal. A similar effect was present on second downs, where Western Carolina was but 2% more successful than they were on thirds. This help offset a slightly higher-than-normal 30.8% success rate on first downs, about 5% more than the Tide typically allow.

The distance chart was kind of interesting, as Western Carolina didn’t get out of the longer distances too often. This is both a good and a bad thing. It’s evidence that the Tide forced three and outs with very little yardage given up6, but also that they gave up some bigger plays for first downs7. Overall this was a great performance from the defense — hard to complain about forcing three-and-outs on 75% of drives8.

8 | Not counting the last drive of the half, which was 2 unsuccessful runs up the gut. Coulda just taken a knee, guys.

Not a whole lot to talk about here. Cyrus Jones picked up another defensed pass, dropping a sure interception toward the end of the half — you’ll note he has a healthy lead for these types of plays. As noted, Jackson receives credit here for ripping out the ball on the first drive of the game, regardless of whether or not the NCAA agrees. Finally, Tim Williams and Josh Frazier collected a sack apiece in the fourth, driving the Catamounts’ rushing yardage for the game south of 0.

As always, if I left anything out, please publicly shame me in the comments.