Turns out the quality of the opposing defense affects offensive performance! Who knew?

On Friday we took a look at defensive charting results over the course of the year; now, it’s time to hit the offensive side. The pertinent information on how the season is broken out is as follows:

In order to do this, I’ve split the 2014 Season into Season A (covering West Virginia, FAU, Southern Miss, and Florida) and Season B (covering Ole Miss, Arkansas, Texas A&M, and Tennessee), and you’ll also see the numbers from 2013 for comparison.

I removed the play column from the charts — there was no clean way to do this for each partial season. If there’s some small sample stuff going on anywhere I’ll let you know in the observations.

Also, there is a poll at the end of this article requesting your feedback as to whether or not you enjoy this format (splitting offense and defense into two articles), or if you prefer everything in one shot. Please vote; the fate of the entire world hangs in the balance1.

LOOK AT ALL OF THIS EXCELLENCE 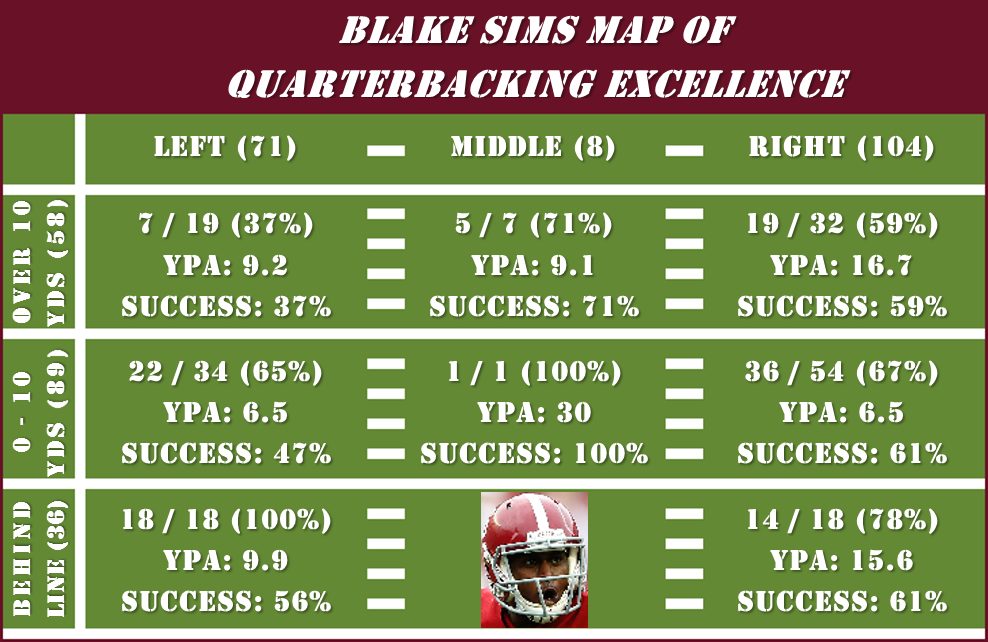 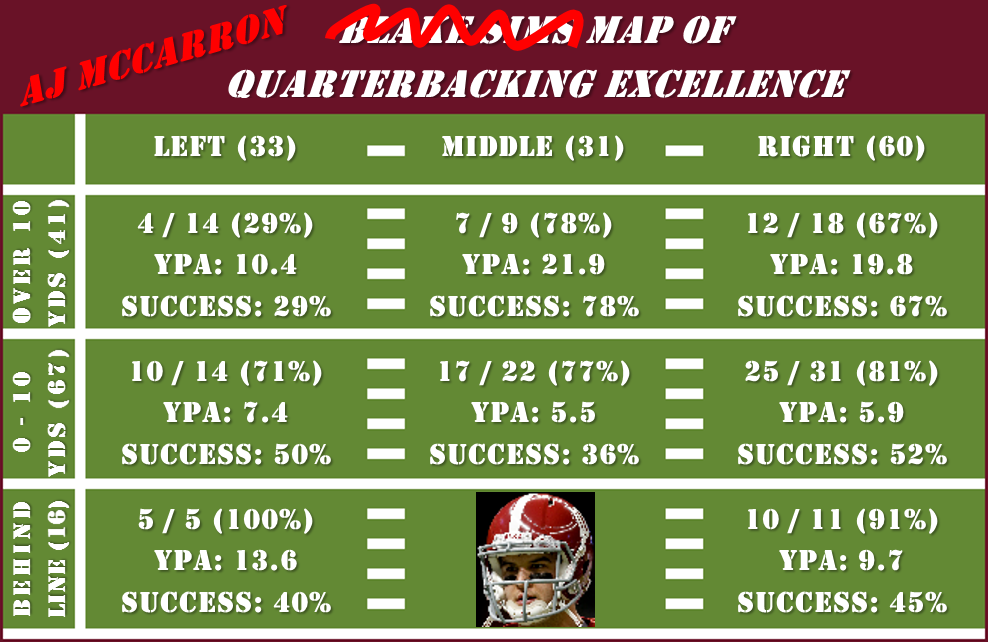 So these look a bit different from what you’re used to seeing. First, as a result of an excellent suggestion by krnxprs2, column headers and row leaders now contain the respective passing attempts for that designation in parentheses (e.g., Blake Sims has thrown left of the hash 71 times on non-garbage plays, etc.). Each block now contains the number of completions over the number of attempts to that block, followed by the completion percentage for that block, the yards per attempt for that block, and the success rate for that block. I still think it looks a little misleading, as I have two sets of hashmarks (implying these are throws to portions of the field) instead of one (implying these are throws relative to the hash, which is what it is). It looks better this way, though, so the Guide explanation will have to suffice because there will be NO MORE CHANGES TO THIS GRAPHIC. NONE. WHATSOEVER.

2 | How do you pronounce this anyway? Kern Express? Krin Expers? Krinx Priss?

This version is just a lot better than the previous iteration, and I’m particularly pleased with my decision to include YPA. I’ve been focusing on just success rate as a measure of performance, when really you need to include an explosiveness measure to get a full picture of effectiveness. I should really be doing that for all of the tables, and it’s given me an idea of a better way to present the data next season3.

But, on to these numbers. You’ll note I’ve got Mr. McCarron’s stats from the 2013 sample plotted as well, so we can compare the two. At first glance, two things are very obvious to me. One, AJ McCarron was significantly more effective throwing down the field than Blake Sims has been in 2014, as evidenced by the stark difference in performance to the deep middle and deep right. Deep left is kind of a push, as Sims has been more accurate and successful but AJ was more explosive. The second thing I note is that the 2014 offense is much more effective on throws behind the line compared to the 2013 offense, as the Tide have gained almost 6 yards more per attempt on the right hand side and boast much higher success rates on both sides. Kiffin also dials up these plays a lot more frequently, but I think everyone knows by now he’s kind of in love with wide receiver screens4.

4 | Sorry Layla. You’re pretty and all, but bubble screens are just so… sensual.

Aside from that, the intermediate distances appear to be kind of a wash, with Sims sporting lower accuracy overall, but better performance to his right versus McCarron having the edge to the left. AJ threw down the middle much more frequently than Blake does, with Sims having a preference for the edges5.

5 | This may also be due to the difference in charters — I tend to be kind of stingy with the "Middle" designation.

I found this chart to be very, very intriguing. I would not have guessed Alabama passed more frequently in 2013 than in 2014, but that’s what the numbers say. The Tide threw on third down last year almost 70% of the time, and are just over 50% for the year in 2014. I suspect this has something to do with better first and second down success rates leading to more options on third downs, but we’ll see that in a bit.

What is also surprising is how much more successful the Tide’s been on first and third downs throws versus 2013. The success rates have fallen off quite a bit from the lofty marks Sims and company tallied in the first four games of the season, but the Tide’s still a full 15% more successful when throwing on third down over 2013. It’s a good thing, because the passing game hasn’t worked too well on second downs: almost 10% worse than in 2013, at least during SEC play.

I should probably note that the numbers in this chart for Season A include a handful of throws from Jake Coker. I stuck them in because the run/pass frequency by down looked way, way off otherwise. No huge changes to the success rates when included, so not a big deal.

This is the flip side to the passing chart — the Tide have run the ball considerably more often in 2014, particularly on third downs. Unfortunately, the success rates have dipped over the course of the season, and lately have not kept pace with 2013 on first and third downs. Offensive line continuity is a big deal, and replacing two starters has taken its toll against the better defenses; the various injuries here haven’t helped matters.

As with the defensive review, there’s all kinds of small samples going on in the directional splits, outside of the Middle row. The Tide’s steadily move away from running up the middle over the course of the year, opting instead for more runs to the edge. You’ll note Alabama runs in the vicinity of big Cam Robinson pretty frequently, much like they ran behind Anthony Steen a lot in 2013.

The success rates split out by direction are pretty telling about the changes along the line. 2013 was slanted heavily to the right, again because of the presence of Steen and the solid play of Austin Shepherd. Left tackle runs haven’t gone well this year, but aside from that 2014 has been a little more balanced. To start the season the Tide running game was outstripping the 2013 unit, but as they’ve moved into SEC play, the success rates have dipped. The notable exception is runs up the middle, which keep getting better and better6.

6 | Are you paying attention, Lane? RUN IT UP THE GUT, LANE. MAKE THEIR ASSES QUIT, LANE!

So, I was wrong about those first and second down success rates earlier. You can see the Tide haven’t kept pace with the 2013 offense during SEC play, finding themselves in third down 5% more often and lagging behind in success rate on first and second down. Fortunately, this team has been quite successful on those downs, converting third downs 6% more often than in 2013. The Season B numbers have fallen dramatically from earlier in the year. Funny thing about good defenses — they tend to make your offense less successful.

Although the 2014 Tide find themselves in very long yardage less frequently than the 2014 unit, SEC play has seriously depressed success rates on shorter yardage — almost 13% lower success rate on very short yardage and almost 7% on the shorter intermediate distances. The Tide have been more successful on very long yardage, a trend which has stood up through SEC play.

I’m not sure what happened after the Florida game, but Kiffin decided to abandon the Pistol, despite it being the most successful alignment in 2013 and the first part of 2014. Oddly enough, hasn’t been particularly effective since then, clocking in at a putrid 11.1% success rate. Use of play action is also dwindling a bit, but the success rate has stayed relatively constant throughout.

After rarely straying out of 1 and 2 back sets to start the year, the distribution is beginning to resemble 2013 a little more, with a slightly higher frequency of empty backfields, which have also been the most successful alignment in 2014. Success rates have tailed off a bit from 2013 and the start of the 2014 season for the other sets.

The 2014 Tide tend to go for multiple wide receiver sets over 2013, with the numbers shifting from 2 wides to 3 and 4 wides over the course of the year. SEC play has seen a slight uptick in 5 wide receiver sets, as has been pointed out previously in this space. Corresponding to the empty backfield numbers, 5 wides has been the most successful personnel grouping for the Tide, with 4 wides right behind. The 2013 group was pretty lethal with the 0 wide receiver (short yardage) sets, their most successful grouping.

Unlike with disruptive plays on defense, I do have splits on the targeting data. In lieu of a table, here's a summary: things were spread around a tad in 2013, and in 2014 All The Throws go to Amari Cooper.

Unsurprisingly, the hellacious start by the Tide offense has been curtailed somewhat by the stronger defenses in the SEC. In almost every metric, the offense was much more successful to start the year than they are now, but that’s to be expected. The continued improvement on runs up the middle, as well as Sims’ steady success rates on third down, bode well for the rest of the season.

As always, if I missed something, let me know in the comments. And please vote!