Shouldn't you be off somewhere playing with your calculator, something of that nature?

Your usual previewer of defenses1 is gallivanting around parts unknown and doing important real-world stuff this week, so you're stuck with me and my annoying little footnotes in the interim. In keeping with the general feel of these previews, I'm not going to drown you in advanced metrics — you know where to go if you want to see that type of thing. I am going to attempt to do this series justice2, however — fortunately the guy who is actually good at this should be back at it soon.

1 | That would be the incomparable KesselRun.

2 | And fail miserably, which is the fun part!

Alabama closes out its road slate for the season against a familar thorn in their side — the 19th-ranked LSU Tigers in legendarily-loud Tiger Stadium. Les Miles and Cam Cameron are doing what they can3 with a typically erratic LSU offense, but as usual the main attraction is John Chavis' nasty defense. Much like the ill-fated Ole Miss game, the Tide are looking at a defense just as talented and stout as its own. The Tigers give up just 318 yards of offense a game (2nd in the SEC and 15th nationally), lagging behind only Alabama among decent football teams its SEC brethren.

LSU is rather stingy when it comes to allowing points, only yielding 15.9 per contest on the year (3rd in the SEC, 4th nationally). The worst efforts came against their best opponents4, but the Tigers have given up just 10 points over their last two games. The Alabama game is one LSU always seems to be up for, so expect a salty and motivated crew to show up in Baton Rouge on Saturday. 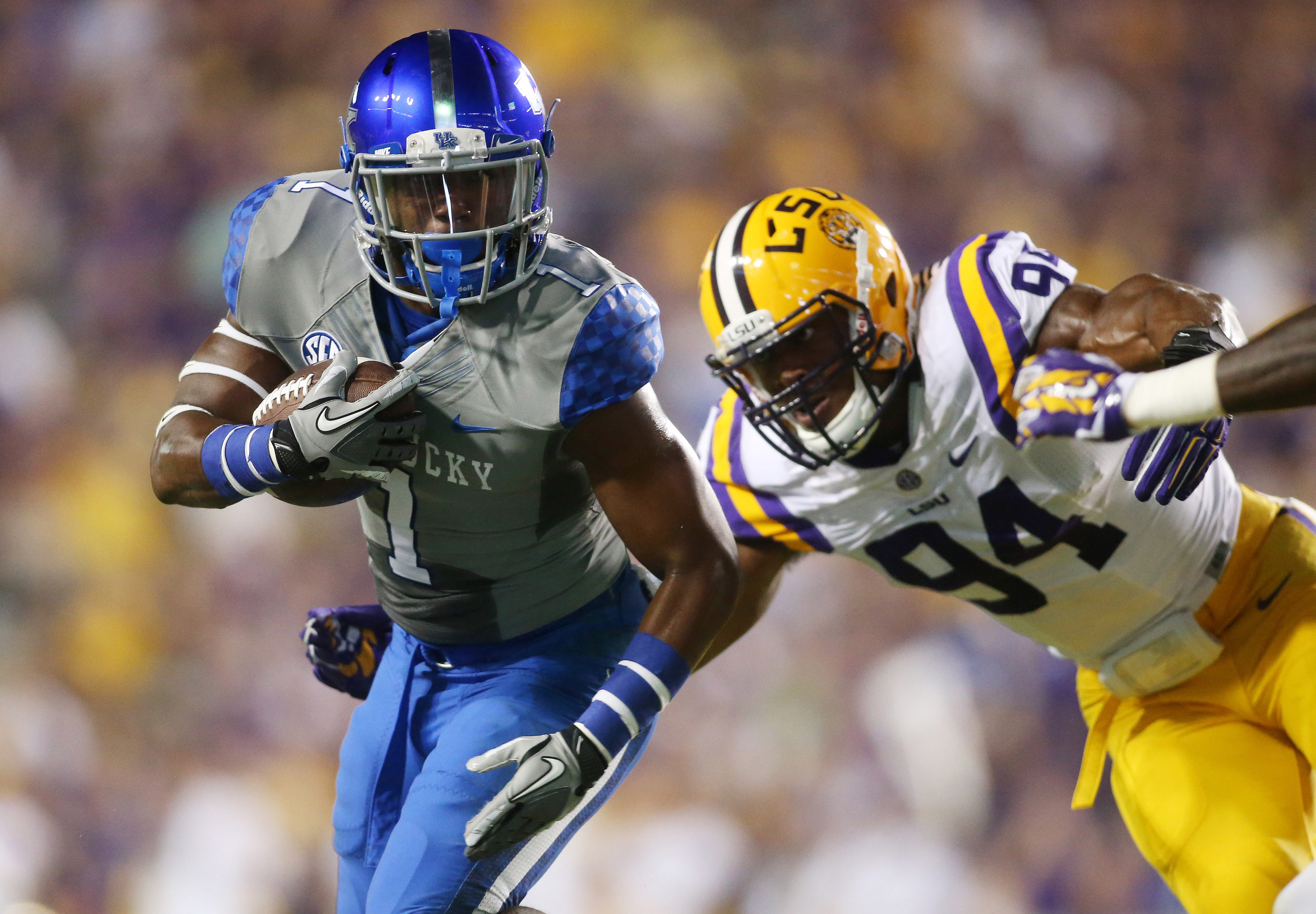 LSU runs a pretty standard 4-3 alignment featuring a pair of veterans on the edge and some young guns inside. This group isn't particularly stout against the run — the 160 yards per game and 4.5 yards per carry are 9th and 13th in the SEC, respectively — but they do provide a solid pass rush to complement the excellent Tigers secondary.

First up is junior Danielle Hunter5. The 6'6", 240-lb end out of Texas leads the team in tackles for loss with 10 on the year. While his counterpart's job appears to mostly be setting the edge, Hunter's lean frame is frequently seen streaking into the backfield. Hunter worked his way into a starting role early last season and never looked back. An athletic specimen who moves fluidly with speed, Hunter should provide a fun evening for Cam Robinson, Austin Shepherd, and/or Grant Hill. Look for freshmen Deondre Clark and Sione Teuhema to fill in for Hunter.

5 | That's Dan-eel, not Dan-yell. I wouldn't mess that up if you ever meet the guy, he looks kinda mean.

Across the line from Hunter is Jermauria Rasco. The 6'3", 247-lb Rasco leads the Tigers in sacks on the year with 3. The former five-star recruit started every game for LSU last season, and is one of the senior leaders for the Tigers. While not the most talented member of this front, Rasco has been big in tight spots this year — no more so than in stoning Bo Wallace's 4th down sneak attempt on the Rebels' second-to-last possession against LSU two weeks ago. Rasco will be spelled by sophomore Tashawn Bower.

The tackle spots saw a complete changeover in the offseason due to the departure of stalwarts Ego Ferguson and Anthony Johnson to the NFL. In their place are space-eaters Davon Godchaux (6'4", 298-lb) and Christian LaCouture (6'5", 300-lb). Godchaux has been a revelation as a true freshman, accelerating up the depth chart after the summer and displacing presumptive starter Quentin Thomas. Nebraska native LaCouture has stepped right into Johnson's ample shoes, as the sophomore has contributed 26 tackles on the year. Look for Thomas, Lewis Neal, and Maquedius Bain6 to come off the bench at these spots.

6 | One thing LSU will always win is names. Don’t ask me how that one’s pronounced, no idea. 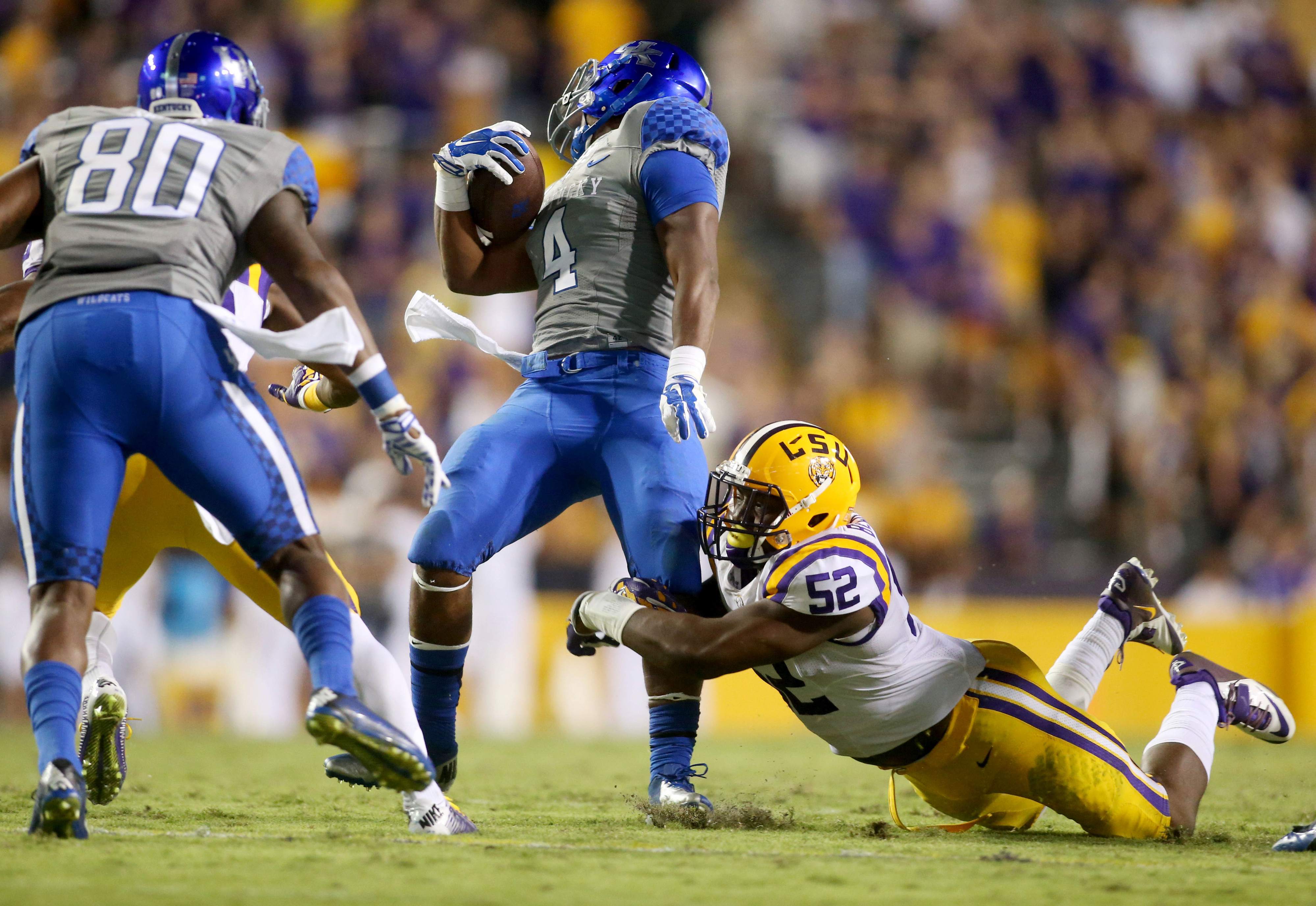 At the Mike position is the rapidly-improving sophomore Kendell Beckwith7. The 6'2", 245-lb Beckwith is big, fast, and jumps off the game tape, garnering 52 tackles on the year with an interception return for a touchdown. A downhill player who mostly sticks between the tackles, Beckwith was named SEC Defensive Player of the Week after his 8 tackle, 2.5 TFL performance against Ole Miss. Beckwith is the starter, but splits time with senior D.J. Welter.

7 | Cousin of Darry, who was a two-time second-team All-SEC linebacker selection for the Tigers once upon a time.

Junior Lamar Louis is the starter at strongside (Sam) linebacker. The 5'11", 229-lb. Louis is a former Mike linebacker, shifting to Sam in the offseason. Probably the least-talented of the LSU 'backers, the former four-star recruit has tallied 19 tackles on the year. Duke Riley is his primary backup.

Across the field from Louis at the weakside (Will) spot is Alabama native Kwon Alexander. The 6'2", 227-lb junior is versatile enough to play at any linebacker spot, and started 11 times at Sam over the last two seasons. Alexander shifted over to Will in the offseason, filling in for the departed Lamin Barrow, and leads the Tigers with 57 tackles and two forced fumbles on the year. Obscenely quick with great closing speed, Alexander is a true sideline-to-sideline player, and his abilities in space allow Beckwith to focus on wreaking havoc up the gut. A definite NFL prospect, this may be Alexander's last year in Baton Rouge. Junior Deion Jones has seen some time on the year as well, logging 20 tackles and 2 TFLs. 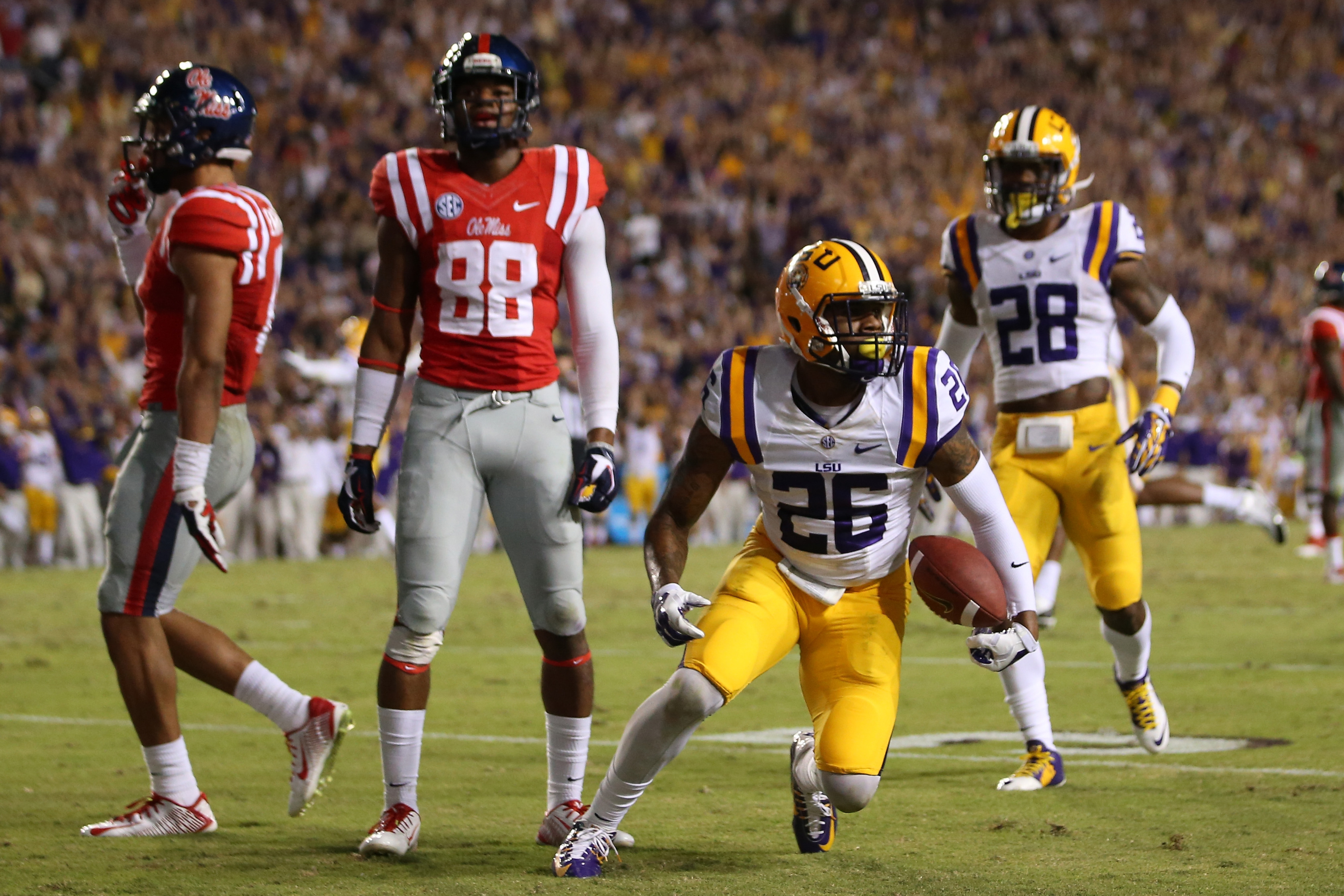 And now we arrive at the real heart of this defense. Among the best in the country, the Tigers yield only 158 yards a game through the air at 5.5 yards per attempt, both tops in the SEC8. This is a deep, talented bunch, and while they have a tall order with Blake Sims, Amari Cooper and company, this may be the best secondary the Tide will face this season.

8 | Also fifth nationally in defensive passing S&P+, but that's an advanced metric and I said I wouldn’t talk about those...

The senior leader of this group is safety Ronald Martin. The 6'2", 220-lb Martin was a starter a year ago alongside Jacksonville Jaguar Craig Loston, but missed the end of the season with a foot injury. Recipient of LSU's Most Improved Player award after a strong spring, Martin leads the secondary with 48 tackles for the season. More of a run defender, Martin can struggle at times in coverage against speedier receivers. Like his fellow senior Rasco, however, Martin steps up in the big spots — his late INT iced the Ole Miss game. Martin's backup is highly-touted true freshman Jamal Adams, a five-star recruit who is on the field quite often in dime packages.

At the other safety spot is Jalen Mills, who was shifted over to safety last season after Martin’s injury. The 6' 194-lb junior is a former freshman All-American at cornerback and is LSU's most experienced defender at 35 starts and counting. Coming out of the spring Mills was in limbo due to some legal trouble, but ended up on the preseason list for the Lott Trophy and has locked down the other safety spot next to Martin. Rickey Jefferson and Corey Thompson also see time behind Mills.

On one side of the field at cornerback is sophomore Rashard Robinson, one of five Floridians on the Tigers. A taller cornerback at 6'3" but pretty slight at just 177 pounds, Robinson was the beneficiary of Mills' shift to safety late last season. Robinson uses his absurd length to bother opposing receivers, and gave Mike Evans all kinds of fits last year in LSU’s game against Texas A&M. Robinson had some academic issues in the offseason, but locked down the cornerback job early and hasn't looked back.

At the other cornerback spot is fellow sophomore Tre'Davious White. The 5'11", 191-lb White was a 2013 SEC All-Freshman Team selection, and was also named to Athlon's Freshman All-America Third Team. The Tigers' best cover man, White was attached to Laquon Treadwell's hip throughout the Ole Miss game. A speedster, expect to see White in the same role against Amari Cooper on Saturday. White and Robinson are backed up by junior Jalen Collins.

If there was ever a week to bust out the oppressive power running game the Tide’s hopefully been hiding, this would be it. The LSU corners are young but talented, and match up well with the Tide receivers. Godchaux and LaCouture have made life difficult for opposing guards as of late, and the omnipresent threats of Hunter and Alexander on the edges mean the Tide offensive line is in for a long night. That being said, if Leon Brown and company can get good push on the inside, the tackles can contain the pass rush around the end, and Blake Sims continues to avoid mistakes and make plays with his feet, the Tide should be able to steal a tight one in Death Valley.