But first, let’s gush (some more) about Blake Sims.

Blake Sims is in the midst of the most prolific season a Tide passer has ever had, and he’s got two more games left in which to pad those stats.

Just kind of roll that around in your head for a second.

Now, I did say prolific, because in this case I’m talking about counting numbers. The previous four Alabama seasons, helmed by AJ McCarron and Greg McElroy, produced the four best seasons by completion percentage with a minimum of 200 attempts in school history; this season will slot in nicely at #5. The record book doesn’t say anything about NCAA passer rating that I saw in the five minutes I spent looking, but Sims’ 161.9 is probably not eclipsing McCarron’s 175.3 from 2012 regardless of what happens in the next month.

What Sims does possess is the following1:

1 | Referring to school records, not SEC or national. Information from RollTide.com and ESPN.

He’s the newly-minted completion percentage king for an SEC championship game with an absurd 85.2%, his second-best performance of the season behind the 85.7% he tallied against Florida Atlantic, whose defense is maybe not as good as Missouri’s. While his passer rating is good for 7th in the country and first in the SEC, his Total QBR rating is second behind the likely Heisman Trophy winner and, barring serious changes over the next couple of weeks, will be the tenth-best season by that metric since 2004. All of this from a guy that nobody2 thought would quarterback this team 4 months ago. Just really unbelievable.

2 | Nope, not even me. Didn’t even mention the guy. Also, I totally whiffed on Robert Foster in this piece.

Now, I’m not a crazy person — much of the reason Sims has put up such stellar numbers are the folks he’s throwing the ball to, namely a particular wide receiver with whom you may be familiar that happens to be up for the Heisman Trophy this year. There’s also the small matter of the OC known for dialing up short, high-percentage throws designed to get the ball to elite athletes in space, where they can make plays and generate huge yards after catch. Certainly earlier in the season production was more the receivers than it was Sims, as throwing wide receiver screens and watching the Biletnikoff winner go to work is a pretty cush job. But lately more has been asked of Sims and he’s delivered, as this is now two weeks in a row he’s chucked a ball 50+ yards down the field and delivered it perfectly into a streaking receiver’s breadbasket. Just because the guy’s wide open doesn’t mean it’s an easy throw to hit right on the money3, and those are certainly not throws Sims would have made earlier in the season. He’s come a long way from arm-punting it to Christion Jones against West Virginia and it’s been a lot of fun to watch.

3 | Particularly not with the SEC’s Defensive Player of the Year in your grill.

Before moving on I should mention Bill Connelly did a fantastic statistical review of the game over at Rock M Nation. Bill more or less invented most of the advanced stats I talk about for college football, so to say he’s a better read than I am would be a colossal understatement. At any rate, give it a look. 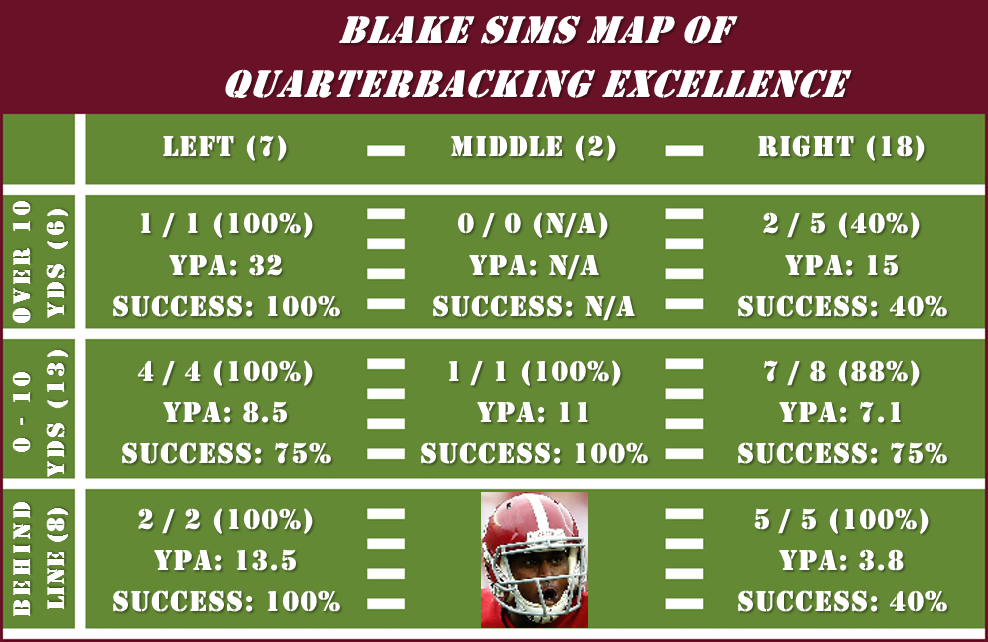 Blake Sims against Tigers this season: 63/99 (63.6%), 783 yards (7.9 YPA), 8 TDs, 3 INTs, 3 wins. Not video game numbers, but pretty effective nonetheless. LSU boasts the 5th best passing defense in the country according to S&P+, and that coincidentally was Sims’ worst performance of the season. Next worst? Ole Miss (3rd) and Arkansas (21st). Funny how that works — quarterbacking on the road against good defenses is tough. Who knew?

Anyway, back to Mizzou. I already mentioned the completion percentage record, and you can see that pretty clearly here. Lots of 100%s, with only the deep right being iffy on that front. Success rates and YPAs are pretty great too, outside of the short right which didn’t produce much this game. I should also note there was a completion for seven yards to the short middle (a "forward toss" to Amari Cooper in the second quarter) that’s not represented in the Map due to the grainy4 picture of Blake Sims that occupies that block instead. Overall, an outstanding day for Sims.

Despite Sims’ outstanding day the Tide went mostly to the ground in this one, falling short of seasonal averages for pass frequency on each down. Success rate on first down was more or less normal, but the second down rate was over 15% higher than usual alongside a perfect 6/6 on third downs.

The Tide ran quite a bit in this one, but before the fourth quarter rolled around and Derrick Henry went wild in garbage time, Missouri actually held the Tide in check for the most part, limiting T.J. Yeldon to just 3.4 yards per carry for the game and Henry to 3.8 before his two big runs. Success rates on first and second down were typical, but a 10% drop on third downs stands out.

Outside of runs in the vicinity of road grader Leon Brown, the direction chart is not any better, with another goose egg over left tackle. How much of that is Cam Robinson’s various ailments is hard to say, but Arie Kouandjio certainly influences runs in this direction as well, and he’s not exactly well-regarded. The right end numbers were a bit better in garbage time, as Henry went two for two in this direction on his later carries.

As is becoming the norm, nothing really to take away from the frequency split by down, as the Tide pretty much performs how they perform in this regard at this point in the season. They were effective on second down and nigh-lethal on third, posting a near 70% success rate versus the seasonal average of 56%. The first down rate was a little off the season mark but not significantly so.

The Tide’s short yardage success rate was already pretty good, but 9 for 10? Hard to stop a team from picking up third downs when they can get 3 yards at will. In fact, success rates were higher regardless of distance than usual, which is a pretty good indicator of the Tide’s success in this one.

Sims operated out of the shotgun more than 75% of the time, which is much higher than we normally see. This wasn’t as effective as when he lined up under center, plays good for a 60% success rate, 13% higher than normal. Play action passes were right on average for the season.

Not too much to take away from the backs chart, aside from a few more two-back looks than normal. Kiffin was a bit more varied with the receiver sets in this one, and that was great because every single alignment was more successful than normal.

Cooper was solid in this one, catching 80% of his targets for 83 yards, albeit for only 5.5 yards per target. Unfortunately one of those missed catches was a pretty bad drop, and from what I’ve read about Coop that probably drove him nuts. The co-star in this one was DeAndrew White, who hauled in 4 of his 5 targets for 101 yards, including a picture-perfect 58 yard touchdown in the second.

The game’s most critical drive was right after Missouri pulled within 8 in the third quarter, as the Tide had looked out of sorts so far in the quarter and at least one Bama fan was getting a bit nervous. Fortunately, Christion Jones produced a touchdown almost all by himself to put the Tide ahead 28-13. The somewhat-maligned senior paired two fantastic 17 yard receptions with his 6 yard touchdown catch, on top of a 36 yard kickoff return to start the drive.

O.J. Howard caught both of his targets in the game, including a bruising 17 yard catch-and-run in the second to set up a Yeldon touchdown. It’s now no longer a coin-flip as to whether or not Howard will catch the ball after the sophomore has caught 8 of his last 9 targets5.

5 | The ninth was a drop against Mississippi State. Still, 8 of 9 is good!

Per usual, if I missed anything of note please publicly shame me in the comments.