How can I say this without sounding like a "homer"? WOW!

Does Nick Saban ever cease to amaze you? It seems like every recruiting class he brings in is better than the last. Let's take a look at this year's class and how they compare nationwide:

BY POSITION
This class could field an entire team and finish fourth in the SEC West (Gump'n; only 4th cuz of the lack of depth):

GEOGRAPHICALLY WHERE THEY COME FROM: 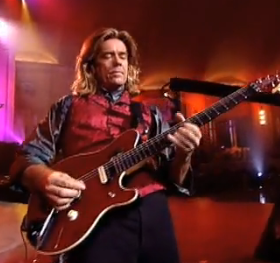 Alabama has 6 of the Top 20 players. 15 are heading to SEC schools. 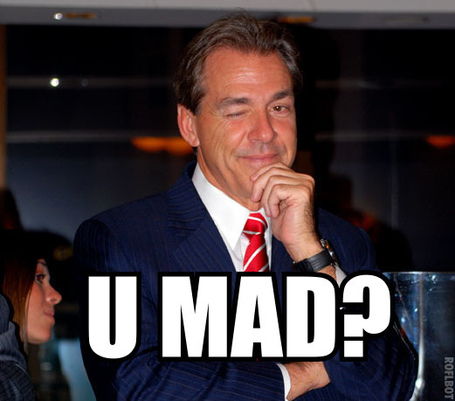 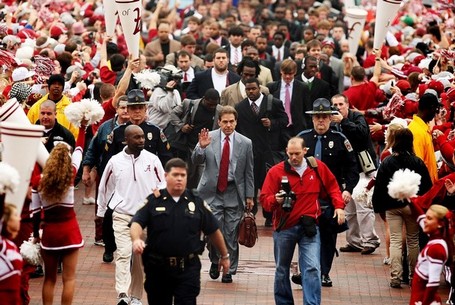 A year ago, Elisha Shaw was a 4-star defensive tackle from Atlanta-area powerhouse Tucker High School. At 6-4.5/295, he was well on his way to a scholarship with a SEC school. But then tragedy struck when a severe neck injury suffered in the pre-season of 2013 prematurely ended his senior season.

Most schools did not stop recruiting Shaw but when doctors came back with a diagnosis that he would probably never play football again, every single school backed off on their offer (including a certain holier-than-thou in-state program which will go unnamed). Surely, mean ol' Nick Saban would turn his back on Shaw too, right? Nope. Saban kept on recruiting Shaw even inviting him up for an official visit on January 24. Shaw will probably never don the helmet and pads again but he will get a full-ride scholarship to the University of Alabama.

This young man will be able to attend Alabama on a football scholarship but it will be on a medical hardship. He did not sign an official letter of intent and medical scholarships do not count toward official recruiting numbers.

You won't see ESPN or the Wall Street Journal reporting this story but if Saban looks sideways at a reporter who asks him an idiotic question, be sure it will be front page news.

Igive all my thanks to god for making all things possible and for letting me be strong and for all his blessings #rt pic.twitter.com/GGzkWnZ1N8

Nick Saban is entering his EIGHTH season at the Capstone winning 83% of his games. The unknowledgeable critics continue to say he is going to the NFL or the University of Texas or the Winnipeg Eskimos and they continue to be wrong.

Alabama is officially taking back the following names: