Share All sharing options for: Better Know Your Bama Recruits | The Latecomers

I think it is safe to say that National Signing Day was a resounding success for the program. How good of a day was it? Judge for yourself.

To help us all familiarize ourselves with these new members of the Crimson Tide, we have been running this Better Know Your Bama Recruits series. In previous installments, we covered the early enrollees, the defense, and the offense. This week, we'll wrap up the profile coverage with a review of the big names that made their decisions on or right around National Signing Day.

Though he didn't actually sign a letter of intent, Coker is considered to be part of the 2014 signing class. His transfer from Florida State to Alabama was probably one of the more discussed stories over the last couple of months. As a graduate transfer with two years of eligibility remaining, Coker will not have to sit out a year and will be immediately eligible to take the helm as the Tide's signal caller after he graduates from FSU. There's no need to dance around it, Coker is our quarterback. If he isn't, something has gone terribly wrong.

Here is some tape of Coker playing in 2013. Bear in mind that he is playing behind a second string offense and throwing to second string targets in this tape, so an honest evaluation is a bit difficult. It's clear that Coker has a heck of an arm, and he looks more durable than any other QB we've had under Saban, but he does seem to take a few more risks than we're accustomed to seeing. Saban will have to beat that out of him, if there is any hope of approaching the level of ball security that we had under McCarron. 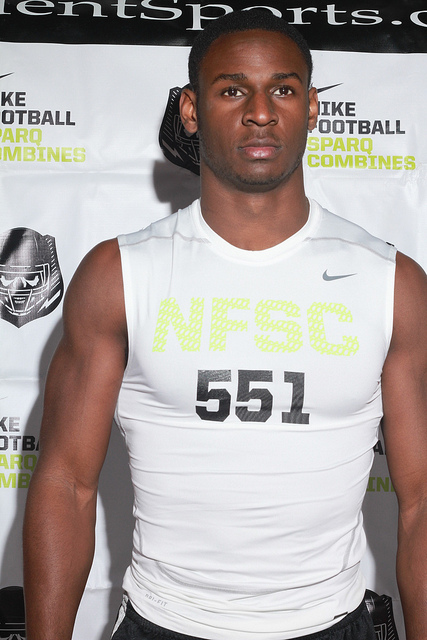 The happy surprise of National Signing Day. An Auburn native, and the son of two former Auburn athletes, this signing should have never happened. It's just too hard to steal a legacy player. And then Kirby Smart showed up at a family party, cut a rug, and stole Auburn's best recruit right out of their backyard.

Ordinarily, this is the part where I break down the recruit, but SB Nation did a scouting report on Evans, and I really like Bud's take, so I'll just point you to Evans' highlight video and drop this quote here.

Bud Elliott, National Recruiting Analyst: Evans is a really special player. He has excellent quickness off the football. He has the frame to eventually play at north of 250 pounds. He has great length to keep opposing blockers out of his breast plate. He has excellent lateral agility and the ability to strafe down the line while keeping his shoulder pads square. He has a good balance, keeping a solid football position, which allows him to play blocks with power, even against much bigger defenders. And he is surprisingly good in pass coverage considering he plays defensive end in high school.

Evans is just a fun defender to evaluate. There are really no true weaknesses in his game. I think he should play outside linebacker in a 3-4 defense, as it will allow him to rush the passer a lot, but also play in space. 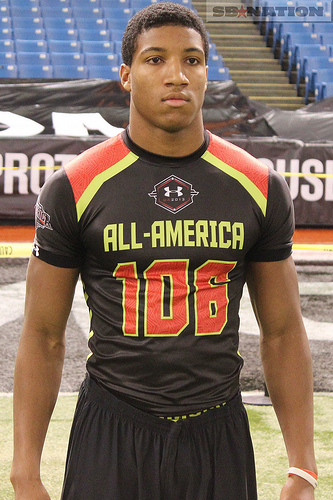 Speaking of legacy players... Humphrey's father is a name that a few people may have heard of, but Marlon was a huge target in his own right. An elite athlete that was clearly one of the best cornerbacks in the class, Humphrey was a must have.

There really is no end to the praise you could heap on this kid. As a cornerback, he's clearly the real deal. He can jam at the line, then turn and run with anybody. He does a great job of getting his head around and locating the ball, and does a fine job of fighting off blocks and playing solid run support. Long story short, this is our star cornerback of the future. I really don't think I'm exaggerating when I say Marlon has the potential that when he leaves (in three years, let's be honest) he could be the best cornerback out of Bama during this run.

The crazy thing? As high as I am on him as a cornerback, he's even better as a punt returner. Watch his highlight film and tell me your jaw didn't drop during some of those returns. The options we now have for punt returner are ridiculous.

On a broader note, Humphrey will also be on the Tide track team (where he'll join fellow five star '14 cornerback signee Tony Brown). These are big gets for the track program as well, and if you're interested in that, you should check out this article about Marlon as a track athlete. If you aren't interested in that kind of thing, check it out anyways for the video of Marlon overcoming a massive deficit when he starts his leg of a 4x400 meter relay race (jump to the 4 minute mark) to win the race for his team. It's pretty remarkable. 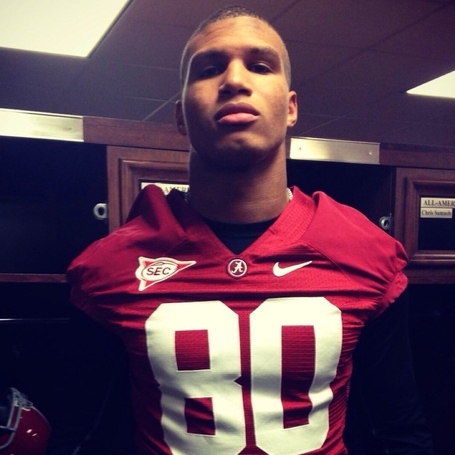 One of the very last pieces in the 2014 signing class puzzle, Flournoy-Smith joins the Crimson Tide by way of Georgia Military College. Flournoy-Smith originally signed with the University of Georgia in 2012, but left the program in May 2013, on the heels of a couple of run ins with the law.

His play doesn't leave a lot to analyze (he only played in 6 games in 2013 at GMC, but he did have 6 catches for 5 touchdowns), so we're probably going to have to take a bit of a "wait and see" approach with this signee.

And that will wrap up our profile series. Please be sure to check out our previous entries, and stay tuned as we start to evaluate what impact these new signees will have.