Has Alabama finally found the right mix of players who can not only effect the quarterback but also put him on his back?

As I mentioned in yesterday's article, Alabama fans have been begging for more sacks since the end of the 2011 season and even though we were blessed with one of the most talented defensive lines in the country, sacks largely eluded this group in 2013. After ending both 2011 and 2012 at 30th and 29th respectfully in sacks per game, in 2013 Alabama dropped to 85th. That's just 1.63 sacks per game.

The mush rush became famous, at least for Bama fans, after Alabama successfully contained Tim Tebow in the 2009 SEC Championship game but times have changed. Cam Newton, Johnny Manziel and Nick Marshall all proved that simply trying to contain a quarterback is not necessarily the best way to beat a mobile quarterback. And affecting the quarterback only works if you are actually able to effect him. If you blitz and miss, you've now left your corners on an island and when those corners are true freshman, you lose.

Honestly using film from games against Johnny Manziel as a measuring stick for how to rush the quarterback isn't exactly fair. He's a once in a lifetime type player and his, man I hate to use the term, escapability is unparalleled. Take the play in 2013 where Pagan (click link for painful reminder) had him all but tackled 10 yards behind the line of scrimmage, yet he was able to break away and find an "open" receiver down field. Those type of plays won't happen every game and generally speaking Alabama did a fantastic job of not letting JFF beat them with his legs in 2013.

So let's look at some plays from 2013 that show us just how capable Alabama is at rushing the quarterback. What I want you to notice in these sets of plays are how much the lineman are moved around from one play to the next and how they are able to get pressure with multiple formations.

In this play, that can be seen here, we will see Alabama pressure LSU's Zach Mettenberger from its base package 3-4 set. The nose tackle, playing a one gap technique (but eventually takes on three blockers), Pagan (bottom of your screen) is playing a 6 technique and Denzell Duval (top of screen) seems to be playing right over top the right tackle.

It's an obvious passing down and the DE's can now rush up field without worrying about inside contain/RB draws. 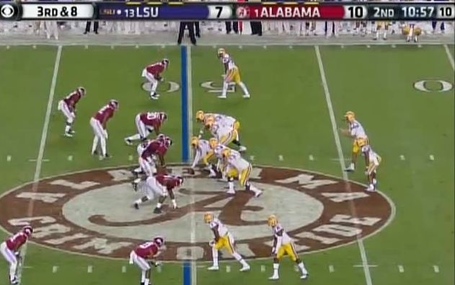 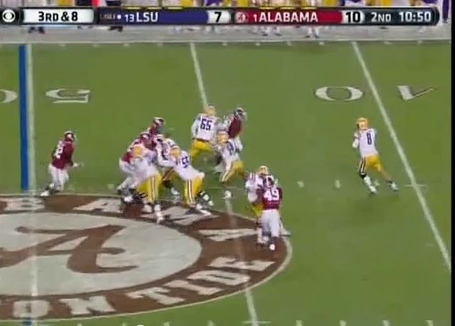 Denzel Duvall (top of your screen), using a slight head fake, immediately beats his man to the outside and has a straight shot at the QB. 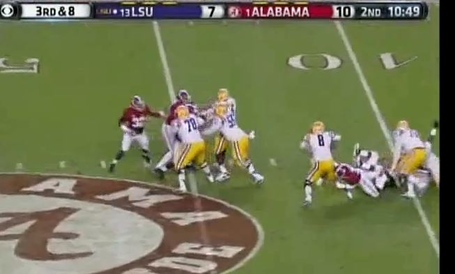 Mettenberger steps up in the pocket and attempts an off balanced throw with Duvall literally attached at the hip. The pass falls incomplete and it's putting time for LSU.

Again, this was an effective rush with only three down lineman and a linebacker in reserve.

Late in the 4th, when the game is all but over we see a possible glimpse into the potential of the 2014 defensive line. You all know this series of plays well as Alabama is able to sack Mettenberger on four straight downs.

The first play, which you can watch here, is a simple four man rush and would be considered a coverage sack. Your line from top to bottom are Duvall, Stinson, Robinson, Hubbard. 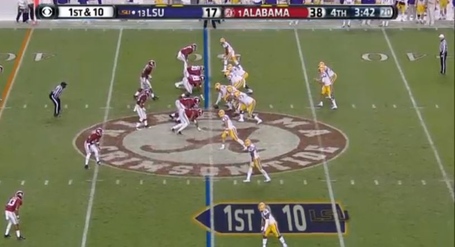 At the snap, Bama indeed only rushes four and CJ stays in the box to take the RB out of the backfield. 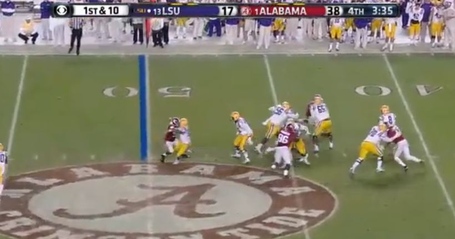 Adrian Hubbard, who had his hand in the dirt, rushes up field and is able to force Mettenberger to step up in the pocket into the teeth of the 'Bama D-line. Eventually, Mett attempts to make it back to the line of scrimmage and is sacked for a one yard loss.

On the very next play, watch here (.51 mark) LSU finds itself once again facing a 'Bama four man front with the same grouping as on 1st down but #8 Pagan has replaced Robinson. As in the play above, Hubbard is now playing with his hand in the dirt and the 'Bama D-line is able to attack the LSU QB with little worry about containment. 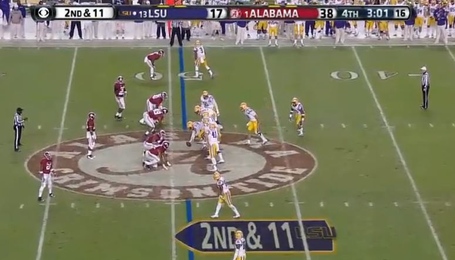 As you can see, Hubbard is playing an 8 technique (playing just inside the Tight End) and Pagan is actually lined up just between the guard and tackle. 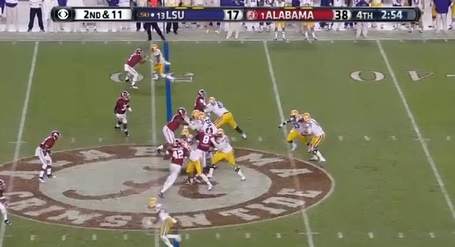 At the snap, Pagan engages the tackle and the tight end attempts to take on the up field rush of Hubbard. 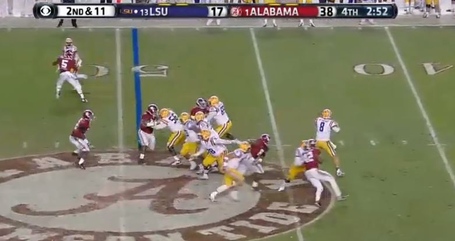 Hubbard beats the tight end easily and the tackle releases Pagan to take on Hubbard. Pagan,who is now free because the guard literally blocks no one, gets the a 2nd sack in a row for the Bama DL.

And though both Pagan and Hubbard will be playing on Sunday for yet to be determined NFL team and not for Alabama in 2014, this is still a good example of how a pre-snap alignment and an aggressive pass rush (along with a blown blocking assignment) can turn "effecting the QB" into sacks.

On third down, which can be seen here, (1.36 mark) the Bama D-line now changes up their pre-snap alignment. Ed Stinson and Xavier Dickson are lined up wide, outside the tackle shoulders, Pagan is playing a zero technique over the center and Hubbard is standing up just over the left guard. 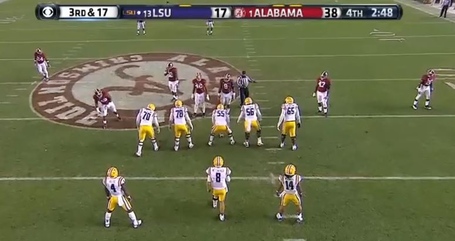 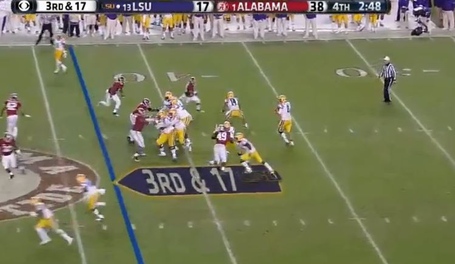 At the snap, both Cyrus Jones and Landon Collins blitz with Jones eventually recording the sack. This may not have been a sack by the DL but the pre-snap alignment by the DL caused confusion along the offensive line, leading to an open gap for Cyrus to run through.

On 4th and 28, which can be seen here,(2.17 mark) Alabama shows a four man front (Dickson, Allen, Pagan, Hubbard) and this sack is caused by a simple power rush where nearly all four lineman get a piece of Mett. Adrian Hubbard uses a bull rush and literally drives his man through Mettenberger. 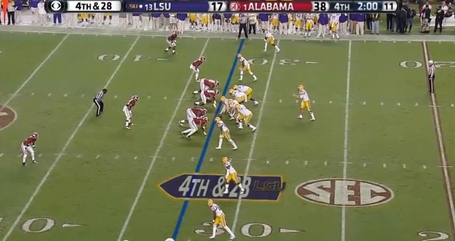 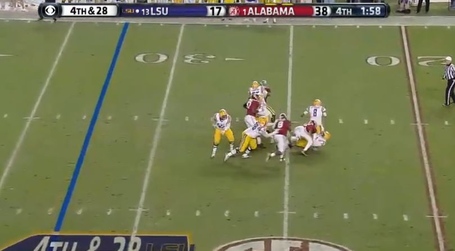 Again, both Pagan, Stinson and Hubbard are gone but with the players Alabama has returning in 2014, we may see more of this and less of the mush rush.

But before you get too excited about the possibilities of sacks on sacks on sacks, we have to remember the defensive line's ability to rush the passer is determined by the offense. Against teams like LSU and Arkansas, who run a more traditional offense with a less than mobile QB, DE's are able to rush up field without worry of the QB escaping the pocket.

However, when playing Ole Miss, Auburn or Texas A&M a defensive line's rush must be controlled, hence the use of the mush rush. But an aggressive defensive line can be disruptive to any offense, even those who employ the HUNH. As you may remember, Oklahoma completely revamped their offense just before the Sugar Bowl and for most of the 1st half the Bama defense played slow, particularly the defensive line and Bama found themselves with a 31-17 half time deficit.

On Oklahoma's first 2nd half possession, on first down Pagan makes an aggressive inside move and is able to sack the OU QB for a 5 yards loss. The next play OU attempts a quick pass, negating the DL's rush but the pass was dropped. On third down, the defensive line once again uses an aggressive rush to disrupt the offense's timing and OU is forced to punt. You can watch these plays here. Early down success against HUNH teams is pivotal for the defense as it can force a slower pace and allow for 3rd and longs. (see more sacks)

The point in all this is to show that Alabama has the talent to rush the QB, when it wants to. My gut tells me the staff holds back the players as to control the rush but as we saw against OU, if you want to slow down the HUNH offense, the defensive line still needs to play aggressive. Allowing offenses short third down conversion attempts gives offensive coordinators full use of the play book and places the defense in guessing mode.

My expectations for the defensive line in 2014 are the highest they've been since 2011. We can mix and match Denzell Duvall, A'Shawn Robinson, Jonathan Allen, Dalvin Tomlinson, Da'Shawn Hand, Dee Liner, and DJ Pettway to create miss matches on the inside and move some to the outside as speed or power rushers. The possibilities are endless and I for one am excited to see if they can live up to the hype.