Share All sharing options for: The Jumbo Package │04.17.14

Breaking down the Alabama secondary - and 'scooching' - with senior safety Jarrick Williams | AL.com

"A lot of guys stepping up," he said after Tuesday's practice. "They’re asking questions, trying to learn and everybody’s trying to be on the same page, where we can be a great group as one." Freshman Tony Brown, Williams said, is among those at the forefront. "Tony’s going to be great," Williams said. "There’s just a lot of stuff he can improve on and stuff he’s got to learn. He’s going to be great when he gets it all."

Asked specifically what Brown needs to improve, Williams said "scooching and footwork." Scooching? "You get your hands on the guy and scooch him, try to stop him from releasing," Williams said."

Just opening up and let him release outside and just put your hands on him."

And this is why enrolling early is an advantage, especially when playing time is up for grabs. Marlon Humphrey may be a better CB than Tony Brown but the experience Tony is getting this Spring is invaluable. I for one  can't wait to see the CB battle this coming Summer

Athletes can now get unlimited meals from their universities.

As ridiculous as it sounds, athletes were previously limited to three meals a day or a stipend. That rule came under controversy recently after UConn basketball star Shabazz Napier said that he and his teammates sometimes have "hungry nights" because the school is not allowed to give them enough to eat. Current Houston Texans running back

Arian Foster has also been critical of the NCAA's food policy, pointing out that Tennessee's coaches were committing a violation by buying Foster and his hungry teammates tacos while he was in college

I'll tell u what the NCAA really lucked out that I don't have any eligibility left.

if you don't get the joke, this is why this tweet won the internet for at least a day. 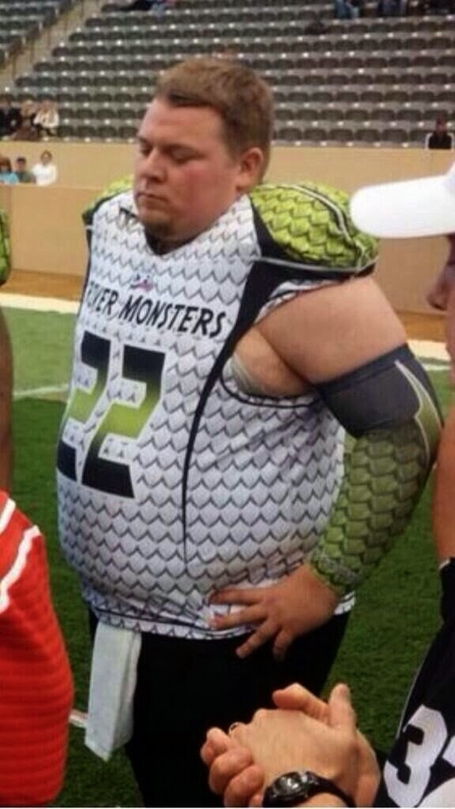 If I'm the NCAA, with all the pressure to pay players and to avoid having to blow up the entire system all together, I would continue to make minor adjustments to the very stupid rules that are in place that would go a long way to make player's lives more comfortable. For instance, slowly but surely make changes to the scholarships, the amount of stipend money allowed, maybe even let players get a job, etc.

If they do that, the only argument left is "Players should get to determine their free market value" and then the NCAA could just laugh in their faces because that's just silly.

Each major college football head coach can be connected to all the others by résumé. And, just for fun, let's put Nick Saban at the center.

This is pretty fascinating. Saban truly is the King of College Football.

"Being versatile," Black said. "I can be in the slot or outside. I've really made a lot of progress playing outside this spring with DeAndrew White being out (injured); taking more reps outside than I've done in the past."

Good to hear Black is still hungry and willing to wait his turn. That injury in 2012 set the guy back two years and you know that had to be frustrating. I really hope he sees some significant PT this year because he has the talent and the last thing we want to see is him transfer.

IT'S RELEVANT. - Every Day Should Be Saturday

We still don't know what really happened in this case. The investigation was a crock, and neither Jameis Winston nor the alleged victim were served by it. All we know is that this keeps happening, and is still happening, and will probably happen again. And that's pretty damn relevant.

Forget Winston for a minute because we as fans have to look in the mirror on who's to blame for this issue. If we really wanted things like this to stop happening (the perceived cover-up by FSU and TPD) then it starts with us. There will always be evil in the world( there's that word again) because women (and men) will be subjected to sexual assault until the end of time. But cover-ups happen when people (fans) place their own motives and fandom over the right's of the victims and alleged assailants. If there was a cover-up it was because someone felt it was their duty to protect Winston and FSU. That's where change starts.

Live at 9 with Mike Herndon: How I Learned to Stop Worrying and Love 6-6 Bowl Teams | AL.com

And what it there aren't enough bowl-eligible teams to fill all 80 slots? It's a very real possibility -- there were 79 bowl-eligible teams for 70 slots last season. The NCAA has a six-step contingency plan for such an eventuality, with the last step being 5-7 teams based on the highest Academic Progress Rate scores.

Wrong, nope, just wrong, wrong, wrong. Yeah, more football is always a good thing, but at some point we have to stop awarding people for doing poorly in life and sports. Sorry but I'm one of those guys who believes every kid doesn't deserves a trophy at the end of a T-ball season and I don't believe 5-7 football teams deserve to go to a post season bowl. You award excellence not failure. I know that's harsh but so is life. Heck, I don't even think 6-6 teams deserve a bowl.

I get that bowl games mean nothing, outside of more Beats by Dre head phones for the players, but if you get a prize at the end of season for going 5-7 whats the advantage of going 8-4? 9-3, 10-2? Set the bar high not lower if you want better results.

Alabama (37-8) could not rally offensively, knocking in just four hits. The Tide's lone extra-base hit of the day was a solo homer by Jadyn Spencer in the fourth inning, her seventh long ball of the season. Auburn (32-12-1) converted all of its hits into runs, scoring six off six hits including home runs by Kasey Cooper and Morgan Estell that accounted for five of the six runs scored. Leslie Jury (13-5) took the loss for Alabama in the circle, throwing 4.1 innings, while Marcy Harper (15-2) went the distance for the Tigers in the win.

Hate Auburn now, hate Auburn forever (unless you're at Disney)

Thoughts on the Crimson Tide:

-Alabama pitching and defense continues to shine. The teams best offensive player, first baseman Austen Smith, suffered a wrist injury when he was hit by a pitch in Saturdays game, he received a MRI and CT scan today and the team is waiting on results. It would be a huge blow to the team to lose him for any length of time. Freshmen Thomas Burrows continues to be outstanding, allowing only one run in 15 appearances. He has four wins and five saves.

-Yeah, I gave Alabama a first-place vote. They're the only consistently good team in the conference. Everyone else is a roller-coaster.--Brandon Larrabee

'Bama is now up to #2 in the SBN blog poll and improved its record to 26-11 after last night's 5-2 victory over UAB. Roger's story on the game will be up shortly. RTR