The University of Alabama has confirmed the death of one of their athletes in the severe weather that struck on Monday night/Tuesday morning. Our thoughts & prayers are with the family of John Servati, the town of Tupelo, MS, as well as the Alabama swim and dive team.

Swimming and diving aren't normally sports that we cover here. That may change in the future, but for now we mourn with the rest of the University of Alabama community for the loss of Junior John Servati. School spokesman Shane Dorrill said Servati died at DCH Regional Medical Center in Tuscaloosa after being injured at a house near campus. Servati had been in the basement of the home in the 1400 block of 22nd Avenue in Tuscaloosa, according to Dorrill. His girlfriend escaped without injuries. 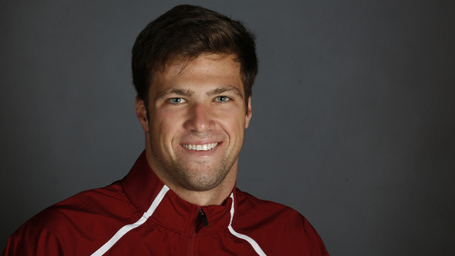 The word around the internet has been that he was working to help his girlfriend and was hit by a retaining wall. Whatever the case, the fact that this falls three years and one day after the tornadoes that struck and took the lives of over 50 in Tuscaloosa including the girlfriend of our then long snapper Carson Tinker brings back a flood of memories that some are having a hard time handling.

On Monday, Servati's hometown of Tupelo, Miss., was one of the most affected areas as a storm system ravaged much of the South. I haven't been able to pin down any specifics but I can only hope and pray that his family was spared from the storm that hit just a few hours earlier there.

Here are a few words about him from around the twitterverse:

Prayers go out to John Servati, his family, those impacted by the storm, and thoughs helping in the recovery. #johnservati #hero

All our thoughts and prayers are with the Servati family and the Tupelo community. We all have a place in our hearts where John will live on

John Servati died a hero. Held up a concrete wall long enough for his girlfriend to get out from under it before it collapsed again on him.

To media-- John's family has asked to grieve privately right now, and I speak for my team in saying that we are trying to give them that...

To media (cont.)--respectfully, right now our response to any questions will be no comment, other than John was a hero and we will miss him.

The thoughts and prayers of the Alabama family are with them in this, their time of grief.  May he rest in peace.